Police in Belarus have fired stun grenades to disperse protesters ahead of a nationwide strike called by opposition leader Svetlana Tikhanovskaya.

Ms Tikhanovskaya, who is in exile in neighbouring Lithuania, had previously set out a “people’s ultimatum” for President Alexander Lukashenko to step down by Sunday night, pledging industrial action if that did not happen.

“The regime once again showed Belarusians that force is the only thing it is capable of,” she said. “That’s why tomorrow, 26 October, a national strike will begin.”

Belarusians have been protesting each weekend since Mr Lukashenko, who has been in power since 1994, won a presidential election on 9 August.

Opposition politicians claim the ballot was rigged, and the president’s main opponents have either joined Ms Tikhanovskaya in exile or been jailed.

Tens of thousands again took to the streets of the capital Minsk on Sunday.

Explosions and white smoke were seen amid the white and red flags of the opposition movement. A dozen metro stations were closed, and there were reports of mobile phone internet connections not working.

According to human rights group Vesna-96, at least 216 people were detained on Sunday.

A government spokesperson said an official figure would not be available until the morning.

The US, EU, UK and Canada have all imposed sanctions on the Lukashenko regime. 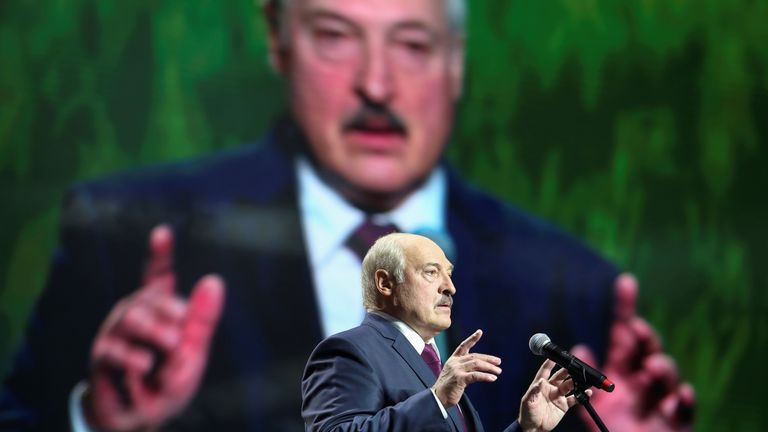 In return, he has accused western countries of interfering in the internal affairs of Belarus.

In a telephone call with US Secretary of State Mike Pompeo on Saturday, Mr Lukashenko said Belarus and Russia were ready to respond to external threats.