Lucas Ferrant, a biologist at the National Institute for Amazon Research (INPA) in Manaus in the Amazon region, had previously predicted the devastating second wave in Manaus in August 2020. But speaking to German news website Spiegel, he has predicted Brazil will experience a third wave of the Covid variant around June, and even earlier in some of the other cities in the country, warning this outbreak “has the potential to become even more deadly”.

However in a more horrifying prediction, he has warned a “vaccine-resistant supervirus” could develop.

The biologist said: “We will experience a third wave with the P1 variant in Manaus around June, and earlier in other Brazilian cities such as Curitiba.

“This third wave has the potential to become even more deadly. In many Brazilian cities we currently still have the British version, but I assume that P1 will prevail there too.

“We are already seeing people who are infected with two types of corona at the same time, that is, with the British and the Brazilian. 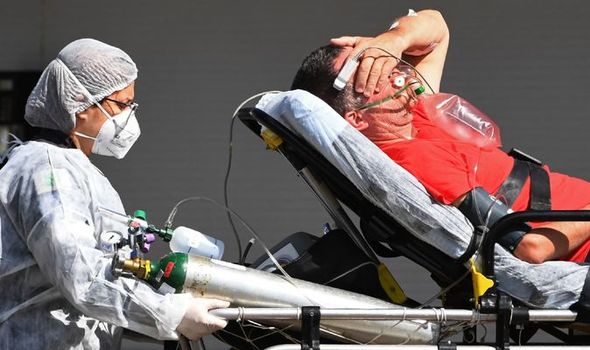 “New variants can arise not only through mutations, but also through crossing.

“And I’m afraid a vaccine-resistant supervirus will develop.”

Mr Ferrante warned that if only a small proportion of the world’s population is vaccinated, then the chance of a vaccine-resistant mutant developing is “particularly high”.

He warned this variant could re-infect people who have already received a Covid vaccine and has urged authorities to ramp up vaccination campaigns as the only way to stop this from happening.

The expert said: “If only a very small part of the population is vaccinated – in Brazil it is currently around five percent – and, as in Manaus, no social distancing measures are enforced, then the chance that a vaccine-resistant mutant will develop is particularly high.

“This mutant can then re-infect people who have been vaccinated.

“A quick, comprehensive vaccination campaign is therefore the only chance to stop the virus now.”

In February, the first six cases of the new Manaus variant were identified in the UK.

Three of the new cases were found in South Gloucestershire and are reported to be close or household contacts with the two cases previously discovered in the area.

The remaining case was found in Bradford, after a person tested poisitive towards the end of last month after travelling back from Brazil via Paris on February 14.

PHE said in a statement: “Contact tracing teams have followed up close contacts of the individual and advised them to isolate and get a test.”

The total number of the P1 variant currently stands at 10 – seven in England and three in Scotland.