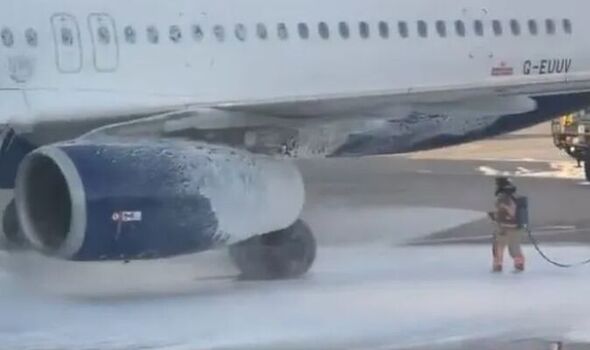 Dramatic images show firefighters hosing down the plane at Copenhagen Airport, Denmark, not long after it arrived from London. The crew and passengers were rushed off the jet as the emergency services dealt with the blaze.

Videos circulating on social media show a crowd of passengers in a waiting room at the airport watching the firefighters tackling the fire.

The flight’s return leg to London was cancelled as a result of the incident.

Police in Denmark said the plane was evacuated after a fire broke out in one of the engines.

The latest incident comes against a backdrop of mounting frustration about long queues at airports and airlines cancelling flights.

British Airways (BA) announced on Tuesday it will axe another 10,300 short-haul flights to the end of October.

The move takes the percentage of cancellations across the airline to a total of 13 percent this summer.

BA has been one of the worst affected carriers in terms of schedule disruption in recent months as the aviation industry battles increased demand and staff shortages after the easing of Covid travel restrictions.

In a statement the airline said it was not where it wanted to be, but believed the cuts were the right thing to do for its customers and colleagues.

It said: “The whole aviation industry continues to face into significant challenges and we’re completely focused on building resilience into our operation to give customers the certainty they deserve. The Government recently decided to give the whole industry slot alleviation to minimise potential disruption this summer.

“While taking further action is not where we wanted to be, it’s the right thing to do for our customers and our colleagues. This new flexibility means we can further reduce our schedule and consolidate some of our quieter services so we can protect as many of our holiday flights as possible.”

BA’s statement added that while most of its flights are unaffected and the majority of customers will get away as planned, the airline does not underestimate the impact its move will have.

It continued: “We’re doing everything we can to get their travel plans back on track. We’re in touch to apologise and offer rebooking options for new flights with us or another airline as soon as possible or issue a full refund.”

Rory Boland, editor of Which? Travel, said the latest blow was a “damning indictment” of BA’s failure to manage its summer flight schedule.

He said: “This latest raft of flight cancellations is a damning indictment of BA’s mismanagement of its summer flight schedule. BA has continued to promote and sell flights it could not fulfil, even as thousands of customers have faced the chaos of cancellations in recent weeks.”

“Which? recently reported BA to the Civil Aviation Authority for neglecting to tell passengers about their right to compensation and failing to reroute customers at the earliest opportunity. The CAA must take action if BA fails to meet its legal obligations amid this latest round of cancellations.”