Small boats flew flags saying No Big Ships as they followed the first post-Covid cruiser – the giant 92,000-ton Orchestra – out of port. One demonstrator said it was ­the effect of tourism they were fighting against. Teacher Marta Sottoriva, 29, said it was “destroying and polluting” both the city and the planet.

In March, Venice announced a ban on large vessels sailing past St Mark’s Square and docking in the centre.

Culture minister Dario Frances­chini last month confirmed that ships “as tall as apartment buildings” had been stopped “for good”. But the ban will only come into effect once new terminals are built.

Campaigners were caught by ­surprise when the Orchestra sailed into the lagoon last Thursday. The 16-deck ship can carry over 3,000 passengers and 1,000 crew but is ­currently sailing at half capacity due to social-distancing rules. It collected 650 passengers before leaving for southern Italy on Saturday. 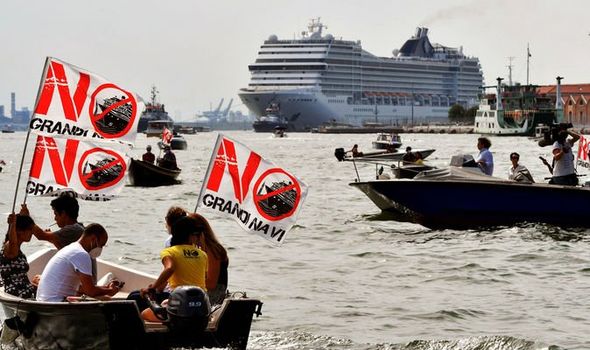 Tommaso Cacciari, of the group No Grandi Navi (No Big Ships) ­said: “The Italian government has been great at deceiving not only ­citizens of Venice, but public opinion around the world.”

Many argue that cruise ships have damaged the fragile underwater foundations of the Unesco world ­heritage site and are pollutants.

Francesco Galietti, of Cruise Lines International Association, said: “We care a lot about Venice, and ­ we’ve been asking for a stable and manageable solution for ships for ­ many years.”