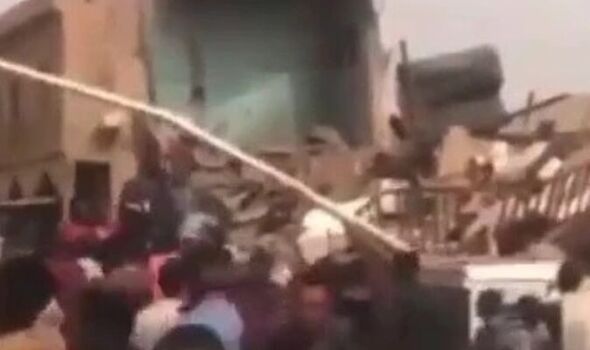 The eruption hit at 9am this morning in the Sabon Garri area of Kano state as hundreds of schoolchildren made their way to class. Witnesses claim dozens of people, including schoolchildren, were killed in the blast. Dozens have people have also been injured.

So far, three people have been confirmed dead.

Terrified and bloodied youngsters can be seeing crying as they attempt to make their way to safety.

While shocking footage shared online shows parents as they desperately search for their children among the rubble.

Eyewitness Collins Ezeanah told how the explosion rocked the house he is staying in in Sabon Gari.

He posted on Twitter: “The bomb shook our house. It happened in Winner’s primary school on Aba Road.

“A student of the school lives in my compound, Chimobi came back filled with sand and tears.

“The little man crawled his way out of the collapsed building. He was looking for his classmates nowhere to be found.

“The videos I saw are so graphic. Little kids died. May their soul rest in perfect peace. Amen.”

Another posted: “The bomb broke my daughter school windows.”