Tiger bones are boiled by illegal traders to produce wine and glue before being sold for huge sums of money, former Royal Marine Aldo Kane discovered as he visited southeast Asia for the BBC’s ‘Tigers: Hunting The Traffickers’ documentary. He saw how brave activists are putting their lives at risk to fight the practice but, as demand is so high, there is little or nothing they can do – besides gathering evidence for future cases. The revelations come as China’s market culture faces unprecedented global attention in light of the coronavirus pandemic, widely believed to have started from a wet market in Wuhan. Now, though, wet markets across the country have reopened and China appears to be celebrating as Beijing claims the outbreak is over and people return to pre-pandemic practices.

Tigers have been “on the brink of extinction” for more than a decade and their numbers have “halved from 8,000 to 4,000” over the last 35 years.

In a bid to combat this, China led a campaign to increase numbers by breeding and raising tigers in captivity.

But according to claims from Aldo Kane’s documentary – released on March 4 – some are using these programmes as a way to market tiger products.

He said: “Tiger farms increase demand for tiger products, and that directly increases the amount of wild tigers that are being poached.” 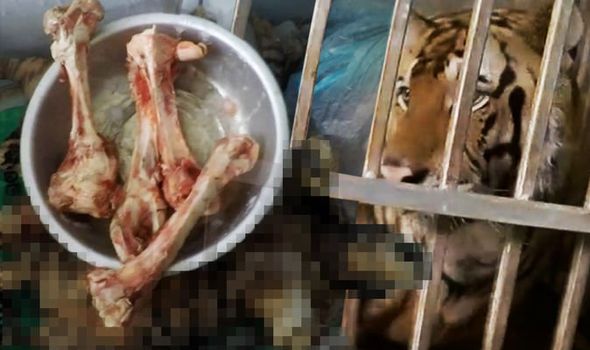 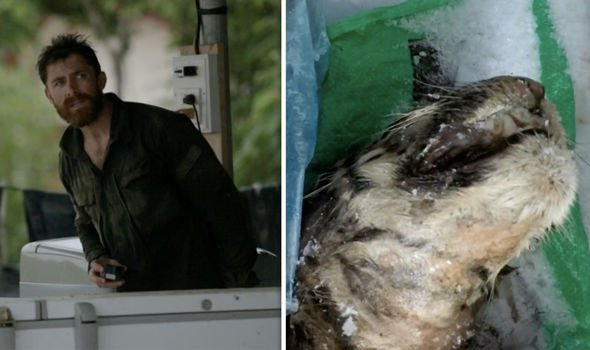 One wildlife detective Chau Doan, went undercover – knowing full well he may be killed in the process – while trying to expose the trade of tiger glue.

He said: “We need to be careful always, but we also need to take risks, always. This is our job, right?”

He claimed 12 pieces could be made from one adult tiger, meaning the financial equivalent of $84,000 (£67,800) for every big cat slaughtered.

Mr Doan explained the dangerous myth behind why some people consume animal products and how that has contributed to a spike in the illegal trade.

He said: “Man is obsessed with their sexual performance. You are a man, you consume the most powerful beast of the jungle.

“You drink the beast’s blood and consume the bone. Maybe it’s just a myth, but a small myth like that accumulated and created the demand for the tiger.”

To create the product the “whole set-up of tiger bones” is ordered and boiled over a few days until it can be made into tiger bone glue.

Mr Doan claims consumers then add it to alcohol and take it “every night”, because they believe it is a “miracle medicine to enhance sexual performance”. 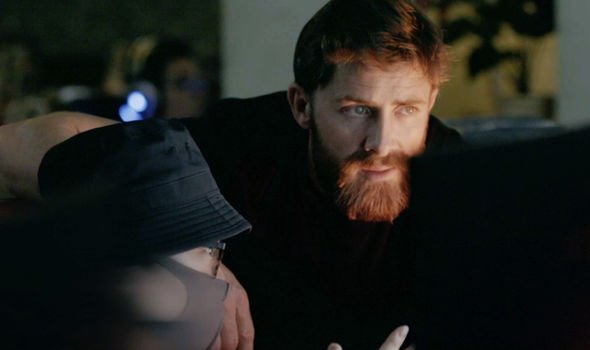 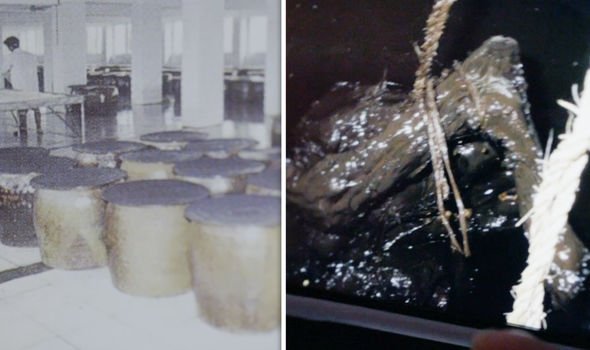 One Chinese activist, who did not reveal her identity because she feared for her life, claimed tiger bone wine was another way people were consuming the product.

She alleged that one of the largest tiger parks in the country was discovered to have a winery in its basement.

Inside the facility, clay pots were discovered to have “tiger bones” suspended inside to brew “artisanal” wine for “up to eight years”.

She claimed there was an added premium charged if the alcohol had been stewed in the bones of a wild tiger, rather than one born in captivity.

Mr Kane described the allegations as “absolutely catastrophic for wild tigers” – as it could encourage poachers all the more.

The unnamed activist said: “For thousands of years tigers have been seen as a symbol of power for the elite classes.” 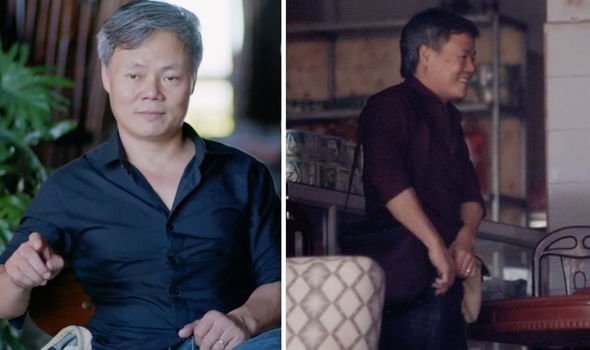 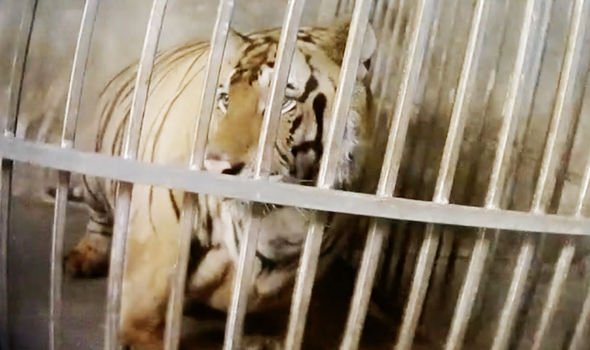 Tiger bone products were claimed to have part of a broader trafficking ring across China, Laos, Thailand and Vietnam.

After receiving a tip-off, Mr Kane visited the Say Namthurn resort, in Laos – which boasted a golf course, drinking water and a zoo.

While sneaking around the facility, he discovered a large chest freezer with a shocking discovery inside.

With a look of sheer disbelief, shock and upset, the documentarian made the decision to hide cameras around the facility in the hope of gaining more evidence for authorities. 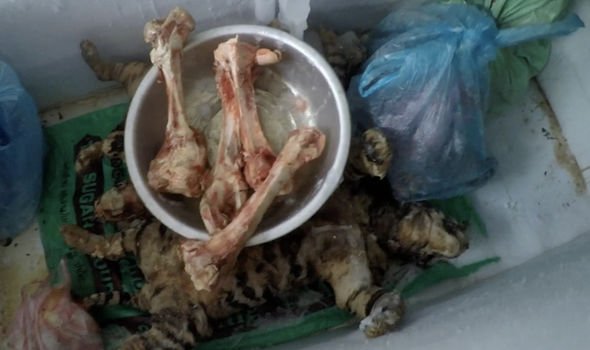 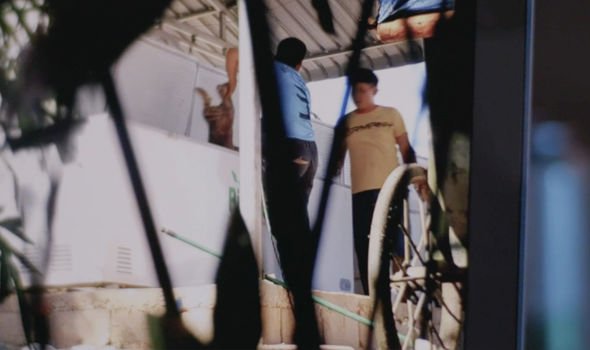 Later upon reviewing the footage, Mr Kane said: “They’re lifting up the freezers and pulling frozen tiger cubs out of the freezer.”

He showed his findings to wildlife investigator Mr Doan who described the workers as having been “caught red-handed”.

Mr Kane handed his video evidence along with other clips that alleged to show “industrial scale tiger wine processing” to the Environmental Investigation Agency (EIA).

The owner of Say Namthurn has since been sentenced to six years in prison for wildlife trafficking.

The EIA also presented that and other evidence to a committee meeting for the ‘Convention on International Trade in Endangered Species’ (CITES), which happens once every three years.

More than 180 countries have signed up to the convention, which aims to discuss actions that will avoid the extinction of animals and plants. 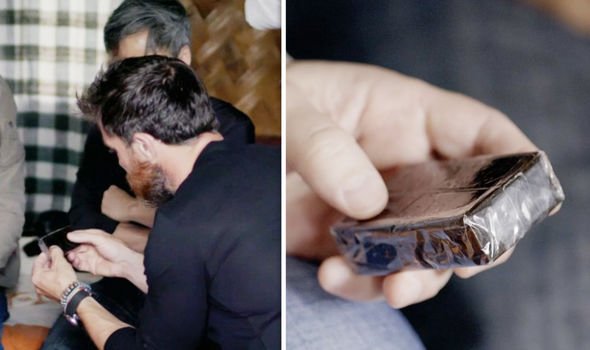 Debbie Banks, of the EIA, has campaigned for the closure of tiger farms for the last 20 years and presented findings to the committee.

She reported Laos for “failing to stop the trade of tiger body parts” and asked for economic sanctions to be put on the country.

But the committee concluded that would not be a good measure, instead demanding they look into the allegations and report back.

Mr Kane commented: “Zero sanctions have been placed on Laos and it’s been given nine months grace.”

While Ms Banks was disappointed by the judgment of the committee she remained strong and stated they would come back with more evidence.

She said: “The big thing is China, because that is the major consumer that is driving all of this.