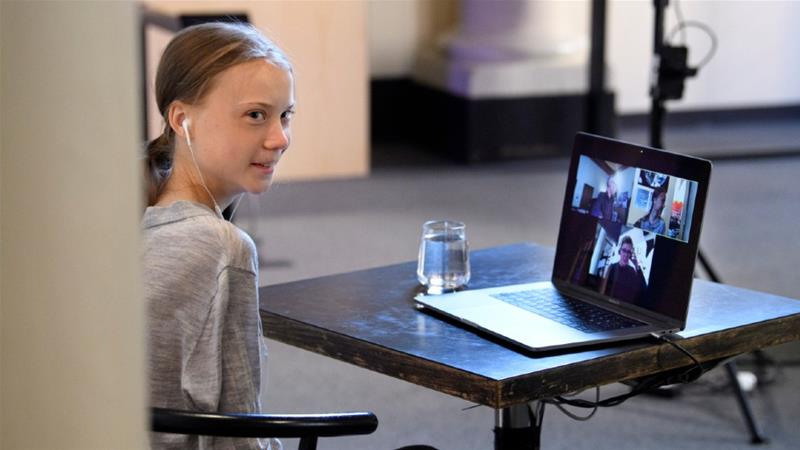 Countries have a chance to choose a new path as societies begin to return to normal after lockdowns imposed to prevent the spread of coronavirus, environmental activist Greta Thunberg told an Earth Day event on Wednesday.

Thunberg, who shot to fame two years ago as a 15-year-old when she started skipping school on Fridays to protest over carbon emissions outside Sweden’s parliament building, said the outbreak showed the need for long-term thinking.

“Whether we like it not, the world has changed: it looks completely different from how it did a few months ago and it will probably not look the same again and we are going to have to choose a new way forward,” she said.

“If one single virus can destroy economies in a matter of weeks, it shows we are not thinking long term and we are not taking these risks into account.”

She was taking part in a streamed event to mark Earth Day, launched 50 years ago to highlight environmental challenges.

Last year was the hottest on record in Europe, according to a study released on Wednesday by the European Union’s Copernicus Climate Change Service.

Thunberg’s school strikes calling for climate action sparked a global movement and transformed the now-17-year-old into the equivalent of an environmental rock star.

Drawing on her statement to the World Economic Forum last year, in which she said: “I want you to act as if our house is on fire. Because it is,” her Fridays for Future movement released a video to mark Earth Day showing a family carrying out their normal routine, despite flames licking around their home.

But not everyone agrees with her approach. United States President Donald Trump in December urged her to “work on her Anger Management problem, then go to a good old fashioned movie”.

And while some still question the role of human activity in the rise in temperatures, opinions are also divided on the best approach to handling coronavirus.

Sweden, for example, has opted for a much lighter touch in its social distancing measures than most of Europe, where societies have been in lockdown.

Thunberg said, however, the current crisis underlined the importance of science in fighting threats to humanity.

“In a crisis you put your differences aside, you act, you go out in the unknown and take decisions that may not make much sense at the moment, but in the long run may be necessary for our common wellbeing,” she said.

Thunberg said in March that she had probably had been infected with the coronavirus after travelling to affected countries, though her symptoms were mild and she had not been tested.