At least 20 people have now caught Coronavirus in the UK. It was also confirmed yesterday that a British man also died after contracting the disease. He was the first UK citizen to die after catching the virus while quarantined aboard the Diamond Princess cruise ship, which was docked off the coast of Yokohama, Japan.

Now people in the UK are buying food and household items in bulk in fear of being quarantined at their homes if the virus outbreak worsens.

Online supermarket Ocado sent an email to customers, which said: “We want to let you know that we’re experiencing exceptionally high demand at the moment.

“As a result, delivery slots are selling out quicker than expected.” 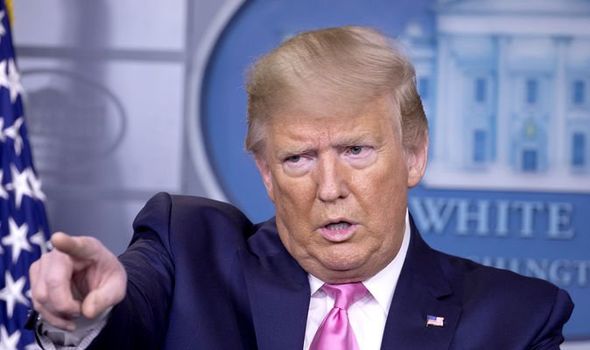 Lidl also warned it was “experiencing a significant increase in demand for durable products or disinfectants”.

A spokeswoman said: “We are doing everything we can to ensure the food supply and we have increased deliveries to our branches.”

Boots is also banning shoppers from buying more than two hand sanitisers at one time, to prevent supplies running low.

8.53am update: UK steps up efforts to control outbreak with “containment phase”

Mr Argar said the UK continued to be in the “containment phase” in terms of the spread of coronavirus.

He told the BBC: “We’re still in the containment phase of this disease. We have been pretty good at containing it thus far. And the chief medical officer has been very clear that there is no reason to think that we shouldn’t be able to continue containing it, so that’s what our focus is on.”

Asked about reports that as many of 15 percent of the UK’s population could need hospital treatment as a result of the infection, the minister said it was “difficult” to make judgments based on events in other countries.

Mr Argar said: “I think what you need to look at when considering any figures is they are extrapolations based on different countries, different rates.

“It’s very difficult, I believe, to extrapolate from, for example, what we’ve seen happening in China or Iran to what might happen in the UK. And I think we need to be very cautious about drawing direct parallels from different countries in different medical systems.”