Afghan authorities have confirmed 367 cases so far, more than 210 of them returnees from Iran hot zone. 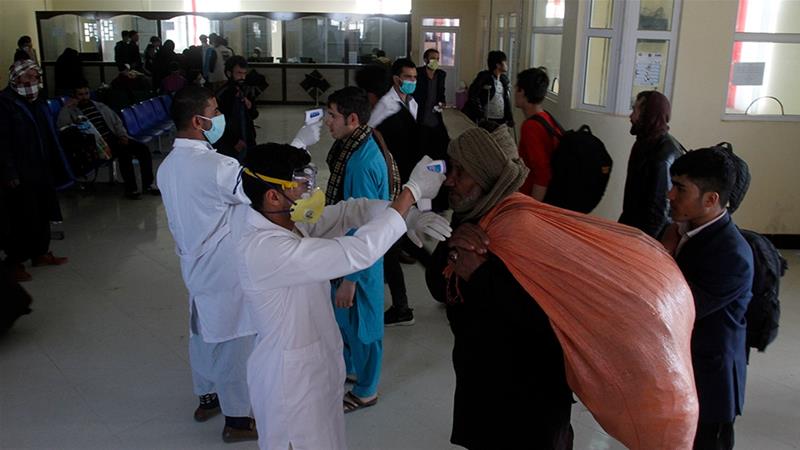 Mahdi Noori, a young Afghan refugee in Iran, was left jobless when the factory where he worked cutting stone was shut down because of the coronavirus outbreak.

He had no money, was afraid of contracting the virus, and had no options. So he headed home.

He joined a large migration of some 200,000 Afghans, and counting, who have been flowing home across the border for weeks – from a country that is one of the world’s biggest epicentres of the pandemic to an impoverished homeland that is woefully unprepared to deal with it.

At the border, Noori lined up with thousands of other returning refugees earlier this month, crowded together waiting to cross.

“I saw women and children on the border, and I was thinking, What if they get infected now, here?” the 20-year-old told The Associated Press.

The enormous influx of returnees, who are going back untested and unmonitored to cities, towns and villages around the country, threatens to create a greater outbreak in Afghanistan that could overwhelm its health infrastructure, already wrecked by decades of war.

So far, Afghan authorities have confirmed 367 cases of the new coronavirus, more than 210 of them in people who returned from Iran. Seven deaths have been recorded.

Afghan Health Minister Ferozudin Feroz said the virus has already spread because of the returnees.

“If the cases increase, then it will be out of control, and we will need help,” he said.

He and other Afghan officials expressed concern that Iran would push out more than a million Afghans working illegally in the country.

Iran has already barred entry from Afghanistan, preventing those who left from coming back.

The International Organization of Migration (IOM) has recorded more than 198,000 Afghans returnees from Iran this year, more than 145,000 of them in March as the outbreak in Iran accelerated.

At the height of the influx, 15,000 people a day were crossing the border, according to Repatriation and Returnees Minister Sayed Hussain Alimi Balkhi, though it has gone down slightly since.

At the border, the IOM gives tents and blankets to returnees who have nowhere to go and transportation money to others.

But the Afghan government and independent agencies do not have the capacity to test, take temperatures or quarantine the returnees.

Almost all go back to their home provinces using public transportation, about a quarter of them to Herat province, bordering Iran.

Noori’s experience mirrors that of many other returnees.

He quit school to go work in Iran when he was 15, bouncing between jobs, most recently cutting stone in a construction materials factory in the central Iranian city of Isfahan. He earned enough to send $180 a month back to his impoverished family of eight.

When the factory shut, he lost his income. He feared that, if infected, he would get no treatment because Afghans are not the priority. He tried to get tested in Iran but was refused, he said.

He travelled back with other workers, not knowing if any of them were infected. Once in Afghanistan, he took buses across almost the entire breadth of the country to reach the capital, Kabul.

On the buses, he was met with hostility from other Afghans who told him, “Fear of coronavirus brought you home to kill others with it,” he said.

He reached his home in Kabul on March 17 and isolated himself for two weeks from his family, fearing he could infect them.

“I experienced the worst moment of my life, meeting my parents, sisters and brothers from a distance after such a long time,” he said, speaking by phone from his home.

The government ordered a lockdown in Kabul and Herat province on March 28, shutting down businesses, restaurants and wedding halls, just as the traditional spring season for weddings was beginning.

But the response has been hobbled by a government crisis that has seen two candidates claiming to have won recent presidential elections and by continued violence.

On Monday, neighbouring Pakistan said it would reopen its border for four days so Afghans wishing to return home can go back.

On the other side of the border, which closed nearly a month ago, the Afghan government has set up a quarantine camp for the returnees.

Pakistani nationals stranded in Afghanistan will also be allowed to go back. According to the IOM, 1,827 undocumented Afghan refugees had returned from Pakistan between January 1 and mid-March.

Habibullah Zafari, who had been studying in Iran, returned to Kabul four weeks ago.

The next day, he went to the testing centre in the capital, where they didn’t test him but instead took his temperature and checked for symptoms. They declared him negative.

Nevertheless, Zafari quarantined himself until just a few days ago, when he finally met his friends and family. He still wears a mask and gloves and stays at home most of the time.

“This virus is like the wind,” he said. “You do not know where it comes from and how you get infected.”