At least 110 people confirmed dead in Brumadinho dam collapse, while 238 are still unaccounted for, say officials. 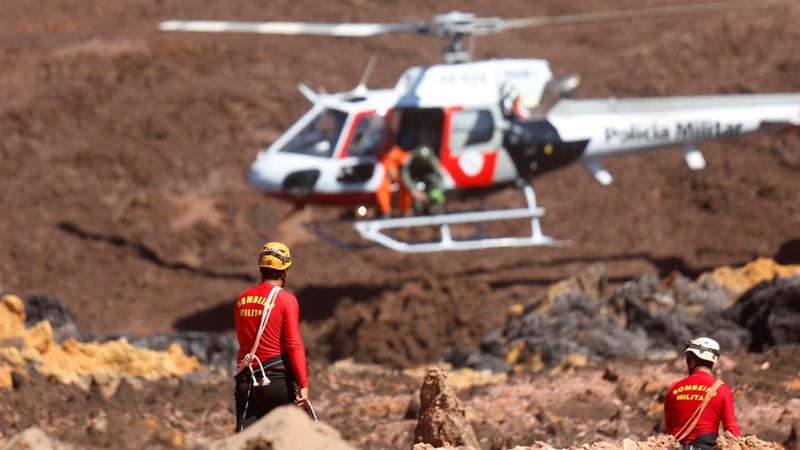 The death toll from a tailings dam collapse in the Brazilian city of Brumadinho has jumped to 110, according to an official and rescue workers at the site.

No one has been found alive since Saturday, but the Minas Gerais Fire Department said it does not want to stop the search for victims.

The dam that held back iron-ore waste, owned and operated by mining giant Vale, collapsed on last Friday, unleashing 12 million cubic metres of mud and debris that buried buildings adjoining the dam and several parts of the small southeastern city of Burmadinho.

The high numbers of dead and missing may make the tailings dam failure Brazil’s deadliest-ever mine disaster.

Rescue workers told Reuters news agency 71 bodies recovered from the mud have been identified so far.

That followed court orders over the weekend freezing 11.8 billion reais ($3.1bn) in assets to cover rescue efforts and damages.

The company had around 24 billion reais ($6.5bn) in cash and equivalents at the end of the third quarter.

A day later, it said it was closing 19 dams in the area and temporarily suspending all operations in Minas Gerais.

The dam collapse in Brumadinho occurred three years after a similar disaster at another of its sites in the same region.

The 2015 rupture of the Bento Rodrigues dam had killed 19 people and caused what was considered the worst environmental catastrophe Brazil had seen.

Several Vale executives were charged with murder but they were never arrested, and the company was ordered to pay millions of dollars in damages.

But according to local media reports less than four percent was paid out.