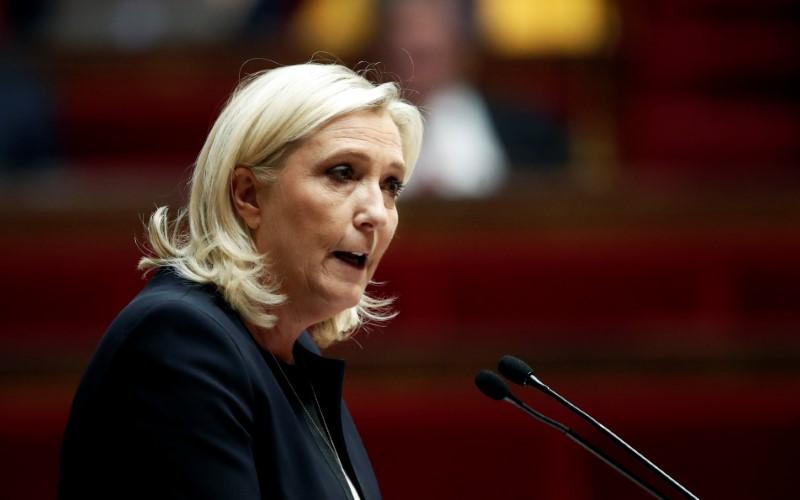 Traditional Labour Day protests that usually see thousands of demonstrators on the streets have been cancelled due to the virus outbreak that has killed some 24,000 people across France.

Unions were organising online activities and asking people to bang their pans and put out banners from their balconies to mark the day.

For the far-right National Rally, which uses Joan of Arc as its own nationalist symbol, Marine Le Pen defied the lockdown in central Paris to lay a wreath at the golden statue of the 15th century warrior.

Sometimes known as the Maid of Orleans, Joan of Arc has become a powerful symbol of France for her fearless resolve in rallying French soldiers against the English and their allies and securing the coronation of Charles VII in the fifteenth century.

“I’ve never said I had doubts about the confinement. I just said that complete confinement was the solution when we failed to prevent the epidemic,” Le Pen, wearing a mask, told reporters.

“A successful end to the lockdown is with tests for everybody, masks for everybody and I am opposed to schools opening before September.”

From May 11, schools will gradually reopen and businesses will be free to resume operations after the country’s 67 million population has been in confinement since mid-March.

The government has said it is prepared to slow or delay the unwinding of the lockdown if the infection rate spikes markedly higher, with administrative departments divided into ‘red’ and ‘green’ zones.

Opposition lawmakers and some experts have questioned the practicalities of schools reopening, the broad use of public transport and the tough measures that will continue to impact areas less hurt by the virus.

Question marks have also been raised about the government’s ability to reach 700,000 COVID-19 tests by May 11, their implementation and the possible isolation of people tested positive for the illness.

In a video message posted on his Twitter account, Macron urged unity and said the country would get through this period.

“I have a thought today for the trade union organisations and the workers of the country which cannot hold their traditional parades,” he said.

“There is a strong desire to once again find the joyful, although sometimes bickering May 1, which makes our nation. My dear compatriots, we will find them, those happy May 1sts!”

Tens of thousands of labour union and “yellow vest” protesters were on the streets across France a year ago demonstrating against Macron’s policies. The protests were marred after dozens of masked and hooded anarchists clashed with riot police.