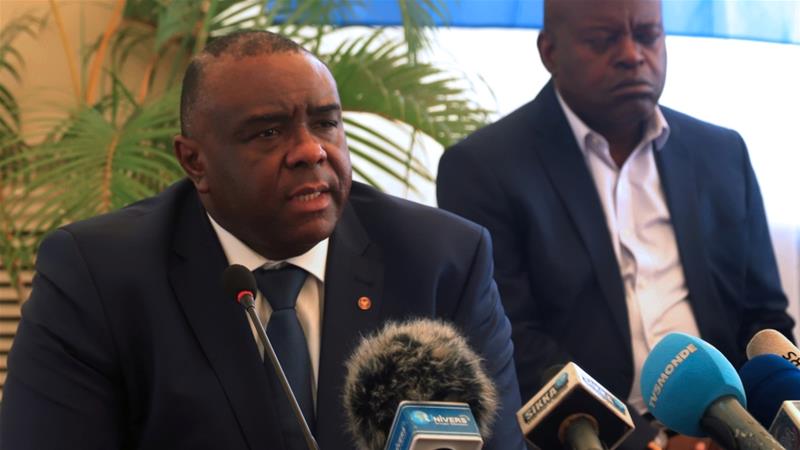 Jean-Pierre Bemba, a former vice president and rebel leader in the Democratic Republic of the Congo (DRC), is seeking millions of dollars in compensation from the International Criminal Court (ICC), his lawyers have announced.

The 55-year-old’s legal team last week filed an application asking judges at The Hague-based court to award him a total of nearly 69 million euros ($77m) for what they called a miscarriage of justice over his former conviction for war crimes, his lawyers said in a statement on Monday.

The sum includes damages for the 10 years Bemba spent in prison between from 2008 to 2018 for alleged murders and rapes committed by the fighters belonging to his Movement for the Liberation of Congo (MLC) rebel group in the Central African Republic (CAR) during 2002-2003.

In 2016, the ICC convicted him on two counts of crimes against humanity and three counts of war crimes over his role in events in the CAR. He was acquitted on appeal in June of last year and released from prison days later.

Bemba’s lawyers said the payment sought from the ICC also included compensation for legal costs and losses in the value of assets frozen by the court while he was in prison.

“Mr Bemba’s property was left over a 10-year period to devalue, dissipate, or simply rot,” their statement said.

Among the devalued assets the lawyers listed was a Boeing 727 jetliner, a plane customarily used for commercial passenger flights. Bemba’s aircraft was impounded in Portugal in 2008.

When he tried to get it back to help pay legal bills, “he was informed that the prosecution was unable to find the keys”, his lawyers said.

“The plane is now scrap. It still stands stranded on the tarmac at Faro Airport,” they added.

The lawyers said that if Bemba received compensation from the court, the money would be used to “provide reparations to the people of the Central African Republic”.

The court made no comment on Monday on the substance of the request.

“It is a request submitted to the judges. We have to wait for the judges’ decisions, and we can’t speculate on the outcome,” court spokesman Fadi El Abdallah told the Associated Press news agency in an email.

In September, the ICC handed Bemba a 12-month sentence and a $350,000 fine for tampering with witnesses during his hearing in 2016.

The court said he did not need to return to jail, however, having already served time over the war crimes case.

A popular opposition leader in the DRC, Bemba finished second to President Joseph Kabila in a 2006 election that sparked deadly clashes between the former’s supporters and state troops on the streets of the capital, Kinshasa.

Last year, Bemba was barred from running in the country’s December presidential election as a result of his conviction for witness tampering.

The poll was won by Felix Tshisekedi, who defeated Kabila’s hand-picked candidate Emmanuel Ramazani Shadary and rival opposition candidate Martin Fayulu, among others, in the ballot.

Election observers reported a number of irregularities during the vote and there were widespread opposition allegations it was marred by fraud.

Fayulu, meanwhile, rejected the result and accused Tshisekedi of making a secret deal with Kabila.

The former president took office in December 2001 after the assassination of his father, Laurent-Desire Kabila, and later refused to step down when his second and final constitutional term officially expired in December 2016.

Tshisekedi and Kabila issued a joint statement last week confirming “their common will to govern together as part of a coalition government” on account of Kabila’s Common Front for Congo coalition holding 342 of the 485 seats in the DRC’s parliament.