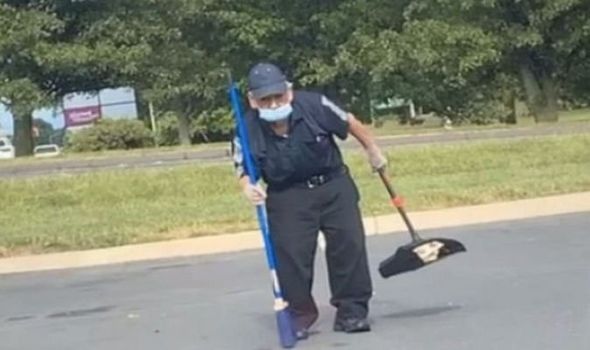 The elderly McDonald’s worker, Gregorio, has gone viral after he was filmed working hard to clean a car park at a fast-food restaurant. Despite being exhausted and working in scorching temperatures, Gregorio struggled on to get the job done while his younger colleagues stayed inside the air conditioned restaurant.

The video, posted on TikTok by user @kandykaine92, has now had more than 2.2million views and sparked anger on social media.

According to @kandykaine92, Gregorio is at least 70-years-old and lost his wife to Covid last year.

In the video she says: “I am at the McDonald’s in Bloomfield, Connecticut. A young man took my order and my payment. A young woman served my food.

“Another young woman came outside to serve people that were doing pickup. I go to my car, and I see this man, outside, in this weather, sweeping this parking, while these three inside, in the AC.

“This man has no water, no food, no one is out here watching him. He is obviously elderly; he is at least 70-years-old.

“He can’t stand up straight. He is struggling. You are telling me people can’t have consideration and help this man? He deserves a raise, he deserves a gold medal.”

One outraged user replied: “This is the world that we live in where elderly people like him have to work because they probably don’t make enough from retirement to survive.”

DON’T MISS
Teen and woman brutally attacked by gang of thugs[UK]
New ‘Pay When You Fly’ option to combat refund uncertainty[UK]
Covid POLL: Should business leaders be exempt from quarantine?[UK]

Another replied: “He should be inside, not out in the heat like that, that is just wrong on so many levels.

In a follow-up video, @kandykaine92 sat down with Gregorio and his niece and he thanked people in Spanish for their support.