Bruno Dey is convicted for his role in the killing of 5,230 people when he was a teenaged guard at a concentration camp. 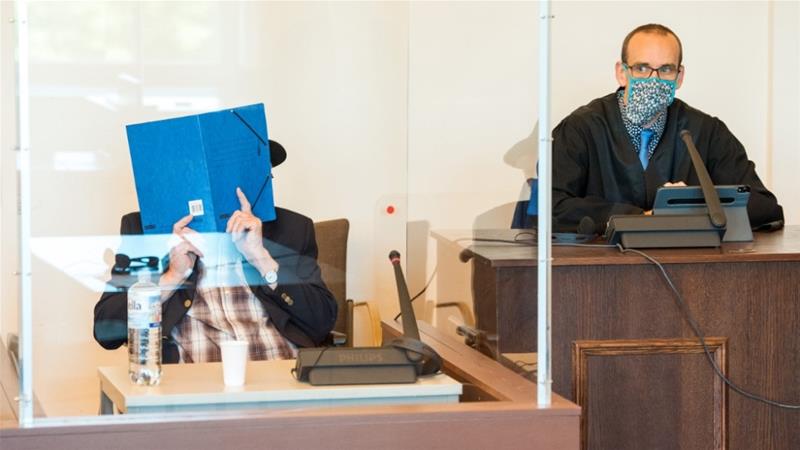 A 93-year-old former Nazi concentration camp guard has been handed a suspended sentence of two years in prison after a court in Germany’s Hamburg found him guilty of complicity in World War II atrocities.

In what could be one of the last such cases of surviving Nazi guards, Bruno Dey was convicted on Thursday for his role in the killing of 5,230 people when he was a teenaged SS tower guard at the Stutthof camp near what was then Danzig, now Gdansk, in Poland.

Judge Anne Meier-Goering said Dey had helped to “dehumanise human beings and turn them into numbers”.

“You still see yourself as a mere observer, when in fact you were an accomplice to this manmade hell,” she told him on Thursday.

In his last statements to the court, Dey apologised to victims but underlined that he had been forced into his role at the camp.

“Today I would like to apologise to those who went through the hell of this madness, as well as to their relatives. Something like this must never happen again,” he said from the dock.

Dey said he was “shaken” by witness accounts from Stutthof, where tens of thousands of people died from illness, malnutrition and murder by gas chamber and surprise execution.

But he added that he only became aware of the “extent of the atrocities” upon hearing witness testimonies and reports.

Chief prosecutor Lars Mahnke demanded a three-year prison sentence for Dey, saying he knew about the “state-organised mass murder” happening around him and should have climbed down from the tower and handed in his weapon.

Dey stood trial at a juvenile court because he was aged between 17 and 18 when he served at the camp between April 1944 and April 1945.

Dey’s defence lawyer Stefan Waterkamp pointed out that such a young man could hardly have been expected to break ranks, and that the teenaged Dey “saw no escape”.

He added that as a tower guard, Dey would not have known the extent of the “sadism” and “inhumane conditions” of the camp.

Dey acknowledged last year that he had been aware of the camp’s gas chambers and admitted seeing “emaciated figures, people who had suffered”, but insisted he was not guilty even if he expressed regret over the atrocities.

“I’m speechless. I don’t want his apology, I don’t need it,” Marek Dunin-Wasowicz, a 93-year-old camp survivor, told the AFP news agency via telephone from his home in Warsaw.

The Nazis set up the Stutthof camp in 1939, initially using it to detain Polish political prisoners. But it ended up holding 110,000 people, including many Jews.

About 65,000 people perished in the camp, approximately 4,000 of them murdered in the gas chambers.

Dey became a baker after the war. Married with two daughters, he supplemented his income by working as a truck driver, before later taking a job in building maintenance.

He came into prosecutors’ sights after a landmark 2011 ruling against former Sobibor camp guard John Demjanjuk on the basis that he was part of the Nazi killing machine.

Since then, Germany has been racing to use that precedent against surviving SS personnel rather than trying to find evidence that they directly committed murders or atrocities.

Courts have since convicted Oskar Groening, an accountant at Auschwitz, and Reinhold Hanning, a former SS guard at the same camp, for complicity in mass murder.

Both men were found guilty at the age of 94 but died before they could be imprisoned.