The 66-year-old looked thin and dazed but otherwise healthy as the family got to hug Jim at a reunion ­in Malaysia. His son-in-law Sam Tasker admitted: “He is a bit overwhelmed.” 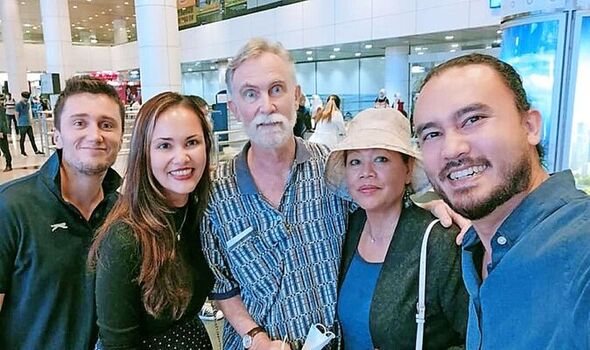 Jim lost at least 14lb during his ordeal, with Malaysian wife Sarijah fearing at one point he could have Covid in a Baghdad jail, where temperatures hit almost 122F (50C).

His 15-year sentence was overturned on appeal last week and he flew at the weekend to Kuala Lumpur to meet up with Sarijah, son Joshua, daughter Leila and her husband Sam.

Leila, 31, who lives in Bath in Somerset where the family is from, said: “It was worse than a nightmare. I’m very close to my dad. He missed our wedding and I really missed him.

“I was stressed every day. I feel like I’ve not slept for months. I can’t imagine what he went through, the amount of anxiety.”

Sam added: “I’m not 100 per cent sure he really believed he was home until he woke in his own bed. It was constant adrenaline and proper fear.”

The Taskers thanked the 357,000 people who signed a petition to free Jim, saying they would “never again doubt the kindness of strangers”.

They also praised Richard Ratcliffe, who gave them advice and support based on his experience after his wife Nazanin Zaghari-Ratcliffe was freed from an Iranian jail this year. Jim grew up in Bath but worked all over ­the world as a geologist in the oil and gas industry.

Although he retired in Malaysia, he sought adventure and travelled to Iraq in the spring on an organised trip to visit ancient sites.

While at the remote desert location at Eridu in the south-east of the country, he picked up pottery shards and stones. After checking with British excursion organiser Geoff Hann, he intended to keep them as souvenirs.

But on March 20 at Baghdad airport, 85-year-old Mr Hann, from Brighouse, West Yorks, became unwell and was not allowed to fly. He had suffered a stroke and died later in an Iraqi hospital.

Customs officials stopped Jim and German Volker Waldmann, who also stayed behind to look after Mr Hann. All three were later charged – with Mr Hann in a coma – with trying to take artefacts older than 200 years out of Iraq, a charge with a maximum penalty of a death sentence. Mr Waldmann was acquitted but Jim was jailed in June for 15 years.

Wera Hobhouse, Lib Dem MP for Bath, said: “In the end, the Foreign Office did step up and I want to say thank you for what they did.”