In Trafalgar Square and surrounding avenues, small bands of protesters jostled, tossed bottles and cans and set off fireworks as riot police with dogs and horses lined up.

Far-right groups shouted racial slurs at the anti-racism protesters, and some tried to use metal crash barriers to break through police lines.

“It is clear that far-right groups are causing violence and disorder in central London, I urge people to stay away,” London Mayor Sadiq Khan said on Twitter.

Interior minister Priti Patel denounced “thoroughly unacceptable thuggery” and said any perpetrators of violence or vandalism would face the full force of the law.

Statues of historical figures including Winston Churchill were boarded up ahead of time to prevent them from becoming flashpoints or from being defaced by protesters who say such monuments celebrate racists.

There have been demonstrations around the world against racism and police abuses since the death of African American George Floyd in Minneapolis last month. In British cities tens of thousands of people have marched peacefully during previous days of protest. 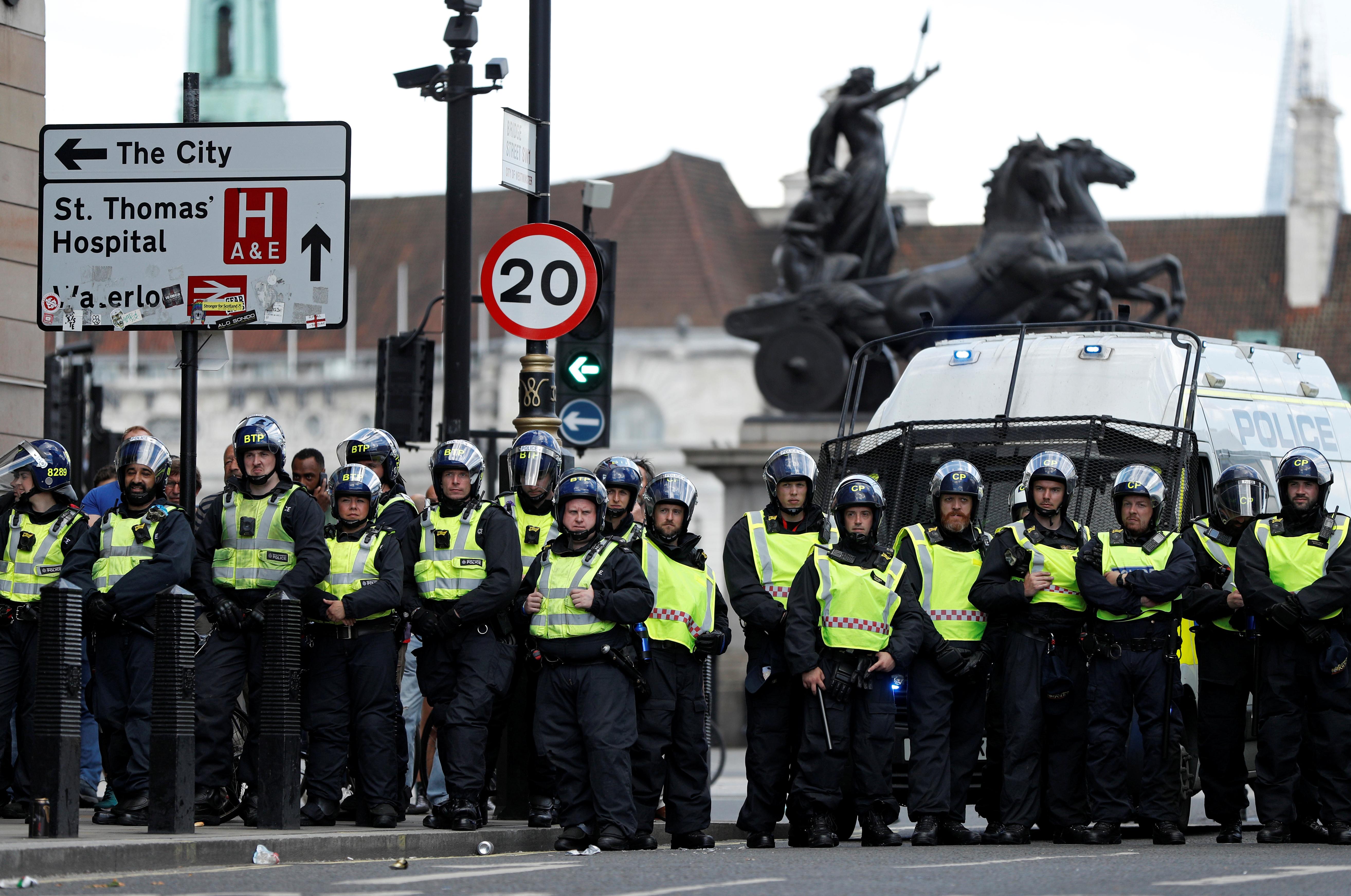 In London the numbers of demonstrators were smaller on Saturday than in recent days, after announcements by far-right groups that they would converge on the city centre prompted anti-racism activists to cancel a planned march and instead call for scattered protests.

Hundreds attended rallies in other English cities, many donning masks due to the coronavirus outbreak and carrying placards with slogans such as “To Be Black Is Not A Crime”.

‘MY CULTURE UNDER ATTACK’

In and around London’s Parliament Square, hundreds of people wearing football shirts, describing themselves as patriots and chanting “England, England” gathered alongside military veterans to guard the Cenotaph war memorial.

The far-right groups said they wanted to defend British culture, in particular historical monuments, after the toppling of the statue of a 17th century slave trader in the port city of Bristol last weekend sparked calls for others to come down.

“Winston Churchill, he’s one of our own,” they also chanted, near the statue of the World War Two leader, which last weekend was sprayed with graffiti reading: “Churchill was a racist”.

“My culture is under attack. This is my culture and my English history: why should Churchill be boarded up? Why is the Cenotaph attacked? It is not right,” said David Allen, one of the protesters. 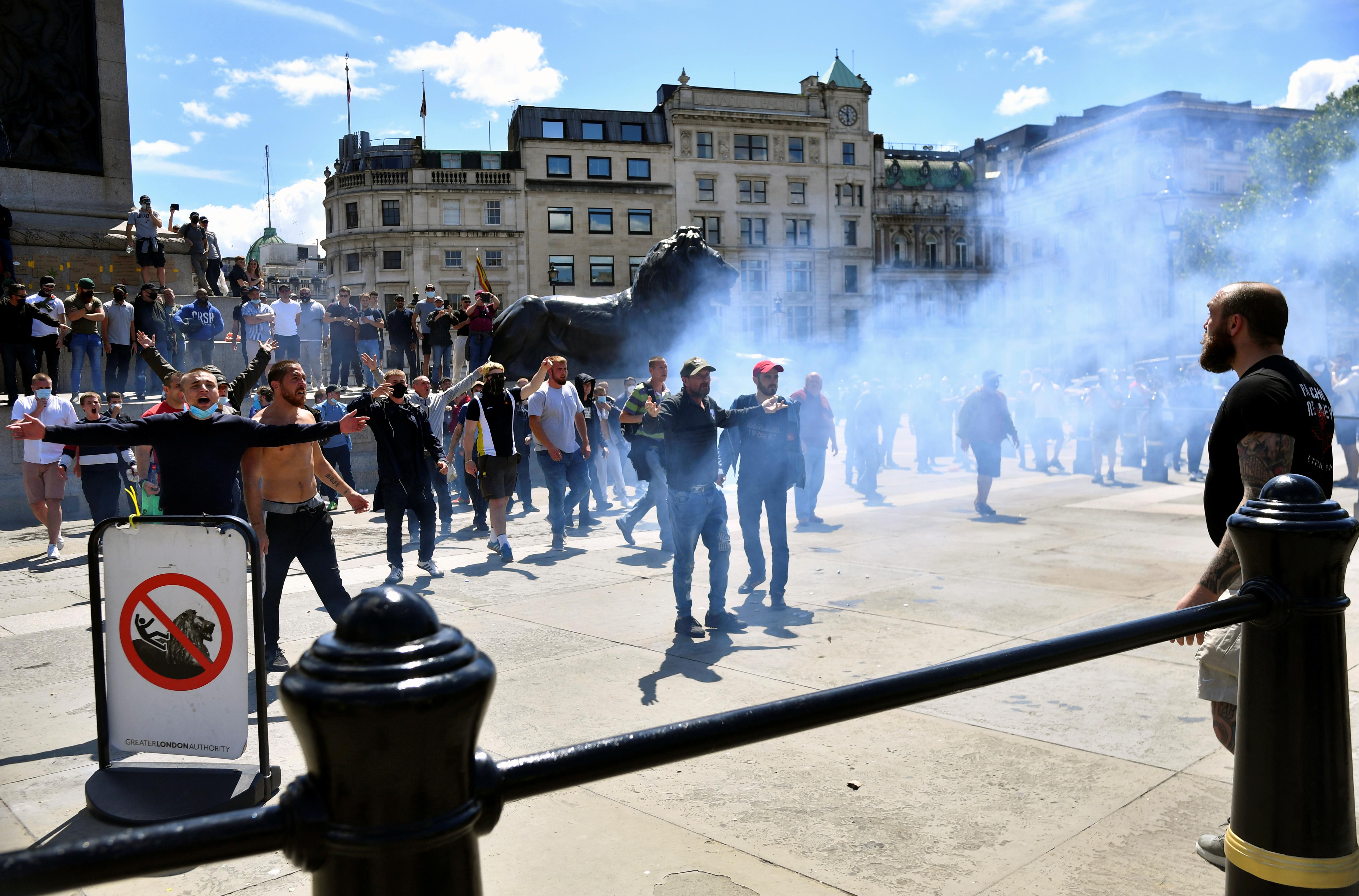 While Churchill is admired by many for his role in defeating Nazi Germany, some in the anti-racism movement have called for more scrutiny of his overall legacy, noting he expressed racist and anti-Semitic views.

On Friday Prime Minister Boris Johnson called it “absurd and shameful” that the Churchill statue was at risk of attack. “Yes, he sometimes expressed opinions that were and are unacceptable to us today, but he was a hero,” he said.

Protests took place in other countries on Saturday, including in several Australian cities, Taipei, Zurich and Paris.