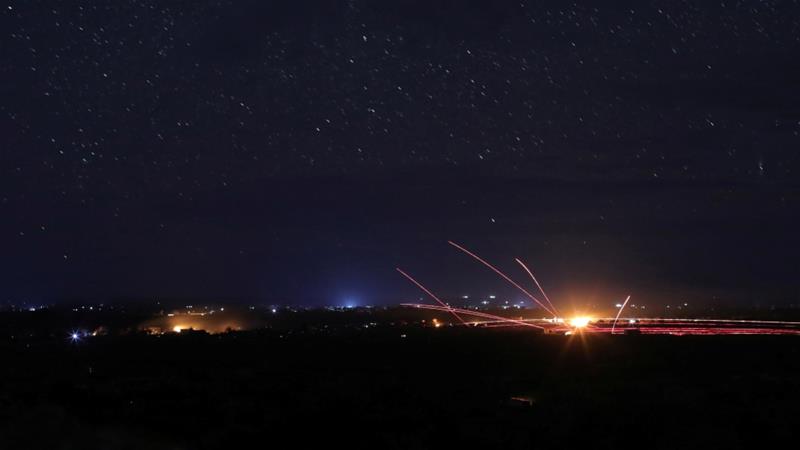 US-backed Kurdish forces say they are locked in heavy fighting with ISIL fighters in northeast Syria, using artillery fire and air raids as they press ahead to capture the armed group’s final patch of territory in the country.

Columns of black smoke on Sunday billowed from the village of Baghouz, in Deir Az Zor province, where commanders of the Kurdish-led Syrian Democratic Forces (SDF) said fierce clashes were under way.

The Islamic State of Iraq and the Levant (ISIL or ISIS) was fighting back with snipers, suicide bombs and booby traps.

An SDF commander in Baghouz told Reuters news agency that the armed group had sent explosive-ridden vehicles towards advancing forces on Saturday night.

In a Twitter post, he said three car bombs that were trying to hit SDF positions were destroyed.

Fires still smouldered from the village on Sunday and ammunition exploded time and again, a day after an air raid hit a building, setting off a huge blast.

Earlier on Sunday, the SDF had said it expected a “decisive battle” after advancing gradually for 18 hours to avoid land mines sown by ISIL, whose fighters are also using underground tunnels to stage ambushes.

By midday, however, there was no sign of the battle being over.

“ISIS fighters have been using suicide vests and car bombs to slow down the SDF offensive and hide from Coalition strikes in the area of Baghouz,” Colonel Sean Ryan, a spokesman for the coalition supporting the SDF, told Reuters.

“They still hold civilians and are lacing the tunnels with IEDs as well,” he said, referring to improvised explosive devices.

The SDF has previously estimated several hundred ISIL fighters to be inside Baghouz, mostly foreigners. Ryan said their hiding underground made it difficult to determine current numbers.

As ISIL’s territory shrank, thousands of fighters, followers and civilians had retreated to Baghouz, on the eastern side of the Euphrates River near the Iraqi border.

Over the past few weeks, they have poured out in greater numbers than expected, holding up the final assault.

After removing the remaining civilians on Friday – mostly women and children – the SDF resumed their assault on the village.

Separately on Sunday, Syria attended a meeting of Arab states in the Jordanian capital for the first time since its war broke out in 2011.

Hammouda Sabbagh, Syria’s parliament speaker, travelled to Amman for an Arab inter-parliamentary meeting. His Jordanian counterpart, Atef al-Tarawneh, called in a speech for regional countries “to work towards a political settlement to the Syrian crisis … and for Syria to regain its place” in the Arab world.

A growing number of Arab states have voiced support for Syria’s return to the Arab League, which suspended the country’s membership in November 2011.

Divisions within the pan-Arab organisation, however, have stalled the readmission of Syria, which with the support of Russia and Iran has largely regained control of its territory from armed rebel groups.

In December last year, the United Arab Emirates reopened its Damascus embassy, the same month as Sudanese President Omar al-Bashir made the first visit of any Arab leader to the Syrian capital since the 2011 uprising.