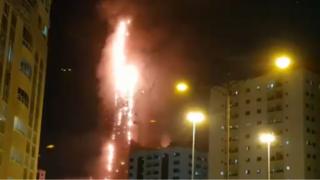 A fire has engulfed a skyscraper in Sharjah, one of the largest cities in the United Arab Emirates, showering debris on cars in the streets below.

Dozens of firefighters worked to put out the blaze in the Abbco Tower using at least a dozen fire engines and drones, a local journalist reports.

They are now trying to cool the 48-floor building down.

There were no immediate reports of casualties or of the likely cause of the fire.

Emergency services were called to the scene shortly after 21:00 (17:00 GMT) on Tuesday.

At least five buildings nearby were evacuated as the fire service worked at the scene, the Dubai-based Khaleej Times reports.