Rough winter weather is working its way across the United States, with bitterly cold air hitting the Northeast and snowstorms expected along the East Coast next week.

Forecasts predict Chicago can expect several inches of snow. Six to eight inches of snow could fall along the I-95 corridor from Washington through New York and up to Boston on Monday and Tuesday.

“Finally, winter’s made an appearance here in the Northeast,” said Greg Carbin, the chief of forecast operations for the National Weather Service’s weather prediction center.

Disturbances to the upper-atmosphere phenomena known as the polar vortex can send icy blasts from the Arctic into the middle latitudes, chilling Europe, Asia and parts of North America. The disturbance and its effects have persisted for an unusually long time this year, said Jennifer Francis, a senior scientist at the Woodwell Climate Research Center, with two disruptions of the polar vortex so far this year and, potentially, a third on the way.

Research into the interplay of the complex factors that bring on blasts from the polar vortex is ongoing, but climate change appears to be part of the mix. While warming means milder winters overall, “the motto for snowstorms in the era of climate change could be ‘go big or go home!’ said Judah Cohen, director of seasonal forecasting at Atmospheric and Environmental Research, a company that provides information to clients about weather and climate-related risk.

The United States has already seen heavy snowfall in the Sierra Nevada and in the Great Plains in the last week. Earlier this month, Madrid was buried under a paralyzing foot and a half of snow, and parts of Siberia suffered an unusually lengthy cold spell with temperatures of 40 degrees below zero Fahrenheit — and one area recorded a temperature of nearly 73 below. (Last summer, some of the same areas experienced record heat.)

The wild weather has its origins in the warming Arctic. The region is warming faster than the rest of the planet, and research suggests that the rising temperatures are weakening the jet stream, which encircles the pole and generally holds in that frigid air. In early January, a surge of sudden warming hit the polar stratosphere, the zone five to thirty miles above the surface of the planet.

When one of those “sudden stratospheric warmings” happens, it delivers a punch to the polar vortex that can cause the Arctic air to shift and to make its way down through the atmosphere to people who suddenly need to layer up and break out their shovels. 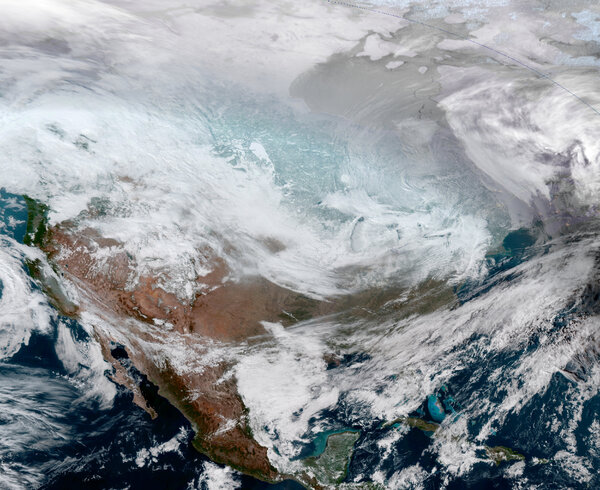 Amy Butler, a research scientist at the NOAA Chemical Sciences Laboratory, offered an analogy: “Picture a bowl of swirling water, or a mug of coffee you’ve just stirred. If you suddenly put a spoon in the water and block the swirling flow, just at the top, it will start to slow or disturb the water underneath it.”

While the scientific evidence supporting climate change is indisputable, the connection between climate change and the disruptions in the stratosphere is not so settled. Dr. Cohen was an author of a paper last year in the journal Nature Climate Change, which looked at winter data from 2008 to 2018. The team found a sharp increase in Northeast winter storms over the previous decade. “Severe winter weather is much more frequent when the Arctic is warmest,” Dr. Cohen said.

Dr. Butler, however, said that across the full historical record, which goes back to 1958, “There is no indication of a long-term trend” in polar vortex disruptions. The weather patterns that affect the vortex “occur naturally even in the absence of climate change,” with some decades showing no disruptions and other decades with one in almost every year.

To Dr. Francis, a senior scientist at the Woodwell Climate Research Center, the influence of climate change on these phenomena is inevitable, if still somewhat mysterious. “We’re changing the planet in such dramatic and incontrovertible ways,” she said. “The atmosphere is different now. The Earth’s surface is different now. The oceans are different now. So there must be some connections that are yet to be discovered as we do more research on the stratospheric polar vortex.”

What happens in the next few days, however, especially in the Northeast, is growing clear, though precisely where the snow will fall, and how deep, is difficult to predict ahead of time.

“Cold is coming regardless,” Dr. Cohen said, “and someone’s getting snow.”