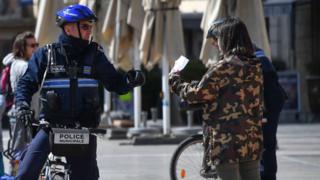 Four alleged fraudsters are being tried in France, accused of conducting fake police checks on people’s permits to leave home during the lockdown.

The woman and three men allegedly posed as officers and robbed victims after asking them to produce the official form people must carry away from home.

The four, who are all Iranian nationals, are being tried as France prepares to ease its lockdown curbs.

Since 17 March, people across the country have only been allowed to leave their homes to go to work, shop, exercise, seek care or conduct urgent family business.

While out, they are required to carry a certificate stating the reason for their trip.

Police say the gang impersonated officers and approached people wearing face masks. After asking to see their victims’ forms, they allegedly searched bags and took whatever cash or valuables they could find.

In an interview with France Info radio, Police Commissioner Nathan Bauer said the suspects “did not speak very good French” and targeted foreigners.

He added that police had identified seven victims, and that €12,000 had been stolen from one of them.

The four are to be tried in the city of Meaux, east of Paris.

The coronavirus outbreak has been linked to about 25,000 deaths in France. But with falling numbers of new fatalities and cases, the government has announced plans to lift some restrictions from 11 May.