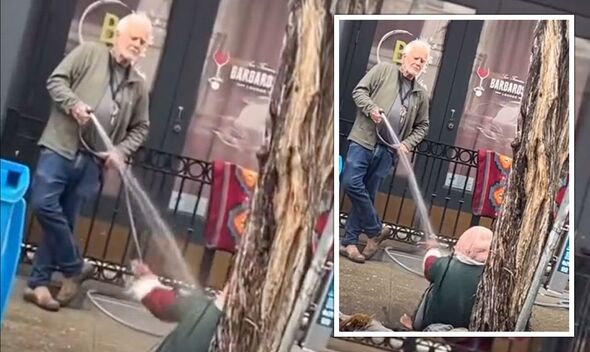 The owner of a San Francisco art gallery was spotted on camera hosing down a homeless woman on the pavement as temperatures dropped to 49 degrees farenheit (9 degrees celsius). The scene was captured in the US city’s Financial District outside where Collier Gwin runs the Foster Gwin Gallery. The man was seen casually watering the woman who screamed in fright, as she appeared unable to defend herself.

The woman shouted “help me” as the gallery owner continued to hose her down with impunity, leaning against the gate of a restaurant.

She desperately tries to protect herself by placing her hands in front of her, but she seems helpless as she remains sat while the man uses a garden hose to blast water at the screaming woman.

The man is then spotted ordering her to: “Move!”

While the woman protests, the man asks: “You’re gonna move?”

The scene took place outside the Barbarossa Lounge on Montgomery Street in San Francisco’s Financial District, but no passer-by seemed to react to the incident.

Except the chef of Brioche Cafe, who filmed the scene as he made a morning delivery around 6 am. He said the incident left him “shocked”.

Edson Garcia told The San Francisco Chronicle: “I was shocked. I know that lady.”

The man caught in the video later admitted dosing down the homeless woman but claimed she had become a psychotic and turning over garbage cans.

Mr Gwin explained to The San Francisco Chronicle: “I said you have to move, I cannot clean the street, move down.”

“She starts screaming bellingent things, spitting, yelling at me… at that point she was so out of control… I spray her with the hose and say move, move. I will help you.’

He added he is a “champion” for trying to help her previously.

The incident quickly sparked backlash with Darren Mckeeman, whose Twitter description says he is “The Most Interesting Man in San Francisco”, claiming he confronted him.

He went down to the scene and said in a video captured at the scene: “I’ve been here four 40 years. We have tons of homeless, but they haven’t been in a situation where they get that violent.”

Twitter users reacted the video, describing it as “horrible”, “inhumane” and “inexcusable”.

Despite widespread backlash on social media, Mr Gwin said he had no other solution but to spray her to “wake her up” and “calm her down” without providing evidence of violence.

The owner of Barbarossa Lounge, where the video was filmed, regretted the incident.

He told the Daily Mail: “We are extremely disappointed in this individual’s behavior and in no way support such actions. We have been informed that further formal and media investigation is underway.

He added: “It’s been a hard time for our business in the past three years with a pandemic. We barely survived that and now our reputation is being ruined by a video that everyone is falsely assuming relates to our business.”

The San Francisco Bay area has struggled to tackle the issue of homelessness, with the ongoing housing crisis pushing thousands of people into homelessness. According to San Francisco Department of Homelessness and Supportive Housing, homelessness has decreased by 5 percent from 2019 to 2022, with estimates ranging from almost 8,000 to more than 19,000 in 2022.