KASTANIES, Greece (Reuters) – Greek police fired teargas to push back hundreds of stone-throwing migrants trying to cross over the border from Turkey on Saturday, as a crisis over Syria shifted onto the European Union’s doorstep. Greece, which has tense relations with Turkey at the best of times, accused Ankara of sending the migrants to the border post in an organized “onslaught” and said it would keep them out.

The crisis is the first major policy test for Greek Prime Minister Kyriakos Mitsotakis, who was elected in July and promised a tougher stance on immigration.

Turkey said on Thursday it will no longer contain hundreds of thousands of asylum seekers after an air strike on war-ravaged Idlib in neighboring Syria killed 33 Turkish soldiers.

Almost immediately, convoys of people appeared heading towards the land and sea borders of Greece, which was a primary gateway for hundreds of thousands of asylum seekers into Europe in 2015 and 2016.

“They (the migrants) didn’t come here on their own. They are being sent away and being used by (our) neighbor, Turkey,” Greek Public Order Minister Michalis Chrysohoidis told reporters.

“Greece yesterday faced an organized, mass and illegal attempt to violate its borders and it withstood this attempt,” government spokesman Stelios Petsas told reporters, referring to the build-up of migrants which started on Friday.

On the other side of the fence Turkey hit back at the Greek accusations.

“We don’t have an obligation to stop people leaving our country but Greece has the duty to treat them as human beings!”

Turkish President Tayyip Erdogan said on Saturday that some 18,000 migrants had crossed borders from Turkey into Europe. Speaking in Istanbul, he did not immediately provide evidence for the number, but said it would rise.

Bulgaria, which also shares a border with Turkey, said it had seen no migrant inflows.

“There is nothing different on our border from what we have seen a year, or two or three years ago,” Prime Minister Poyko Borissov told reporters.

A Reuters witness said there were about 500 people between the Greek and Turkish border posts, and beyond that on the Turkish side, at the Pazarkule border gate, hundreds more.

Overnight, demonstrators hurled flaming pieces of wood at police, amateur footage filmed by a policeman on the scene, which was seen by Reuters, showed. Police fired teargas to keep people back.

An estimated 3,000 people had gathered on the Turkish side of the border at Kastanies, a Greek government official said. Kastanies is just over 900 km (550 miles) north-east of Athens.

“We are making a titanic effort to keep our borders closed to such migration flows,” Panagiotis Harelas, head of border guards in the area, told reporters, showing empty tear gas canisters which were hurled from the Turkish side. They had Turkish writing on them.

Nearly a million refugees and migrants crossed from Turkey to Greece’s islands in 2015, setting off a crisis over immigration in Europe, but that route all but closed after the European Union and Ankara agreed to stop the flow in March 2016.

Greece shares a long river border with Turkey, and is a known permeable route for asylum seekers.

Reuters video showed tens of people at a time climbing, and some throwing their bags over a 3-metre (10-foot) fence covered all over with barbed wire along the Greek border in Turkey’s western Edirne province.

A group of Afghans with young children waded across fast-moving waters of the Evros river and took refuge in a small chapel. They crossed into Greece on Friday morning.

“Today is good” said Shir Agha, 30 in broken English. “Before, Erdogan people, police problem,” he said. Their shoes were caked in mud. It had rained heavily the night before, and by early morning, temperatures were close to freezing. 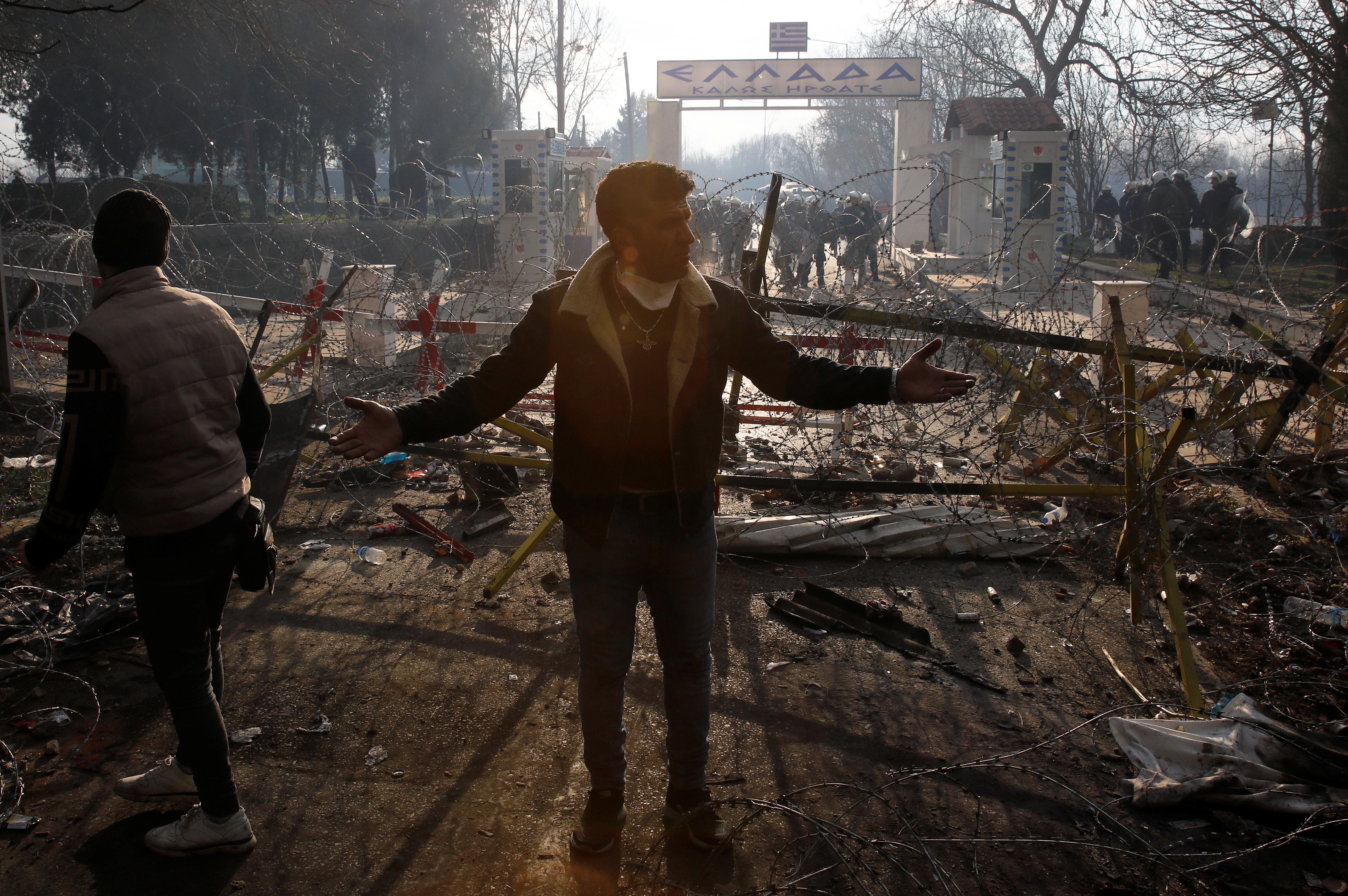 Greece had already said on Thursday it would tighten border controls to prevent coronavirus reaching its Aegean islands, where thousands of migrants are living in poor conditions.

A Syrian man, who did not give his name, said they had been in the border area for two days and were in need of food.

“We’ve been here for two days, We have no food, look at these kids,” he said.