The Met Office has issued a yellow weather warning for wind and rain in parts of Scotland, with the rest of the country set to feel the weakened tail end of Hurricane Ian’s devastating effects after it swept across Florida, USA. Powerful gusts of up to 75mph may be felt across the western parts of Scotland, creating hazardous driving conditions and delaying public transport amid a 24 hour wrath of bad weather tomorrow (September 30).

These speeds will only decrease by 20mph later in the day in the south east. The forecaster has said 55mph winds may even be felt across the English Channel, which could in turn affect ferry operations at the Port of Dover in Kent. Nearly all parts of the UK will experience some form of heavy rain throughout the day as the huge band swings in from the west.

The Met Office has cited the warm tropical jet stream pushed northwards as the cause behind tomorrow’s bleak weather.

This has been exacerbated by Hurricane Ian, the forecaster says – which has caused mass devastation across Florida in the US as winds of 125mph swept in yesterday, killing hundreds of people and leaving others trapped among fallen debris.

Chief meteorologist Chris Almond said for the UK, these conditions are not wholly unexpected: “It will bring a much wetter and windier spell than we’ve seen so far this autumn, but nothing that is unusual for the time of year.

“The fast-moving system will bring strong gale force winds, locally in excess of 60mph, and heavy rain into the northwest before pushing quickly southeast through the day. 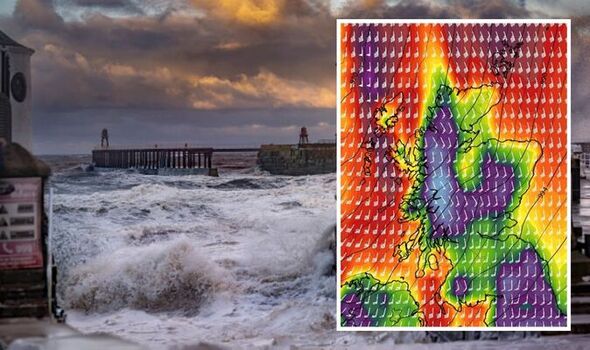 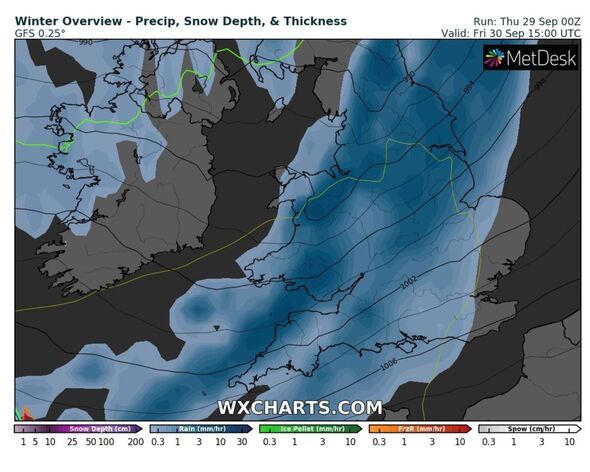 “We could see some minor impacts, such as surface water flooding or minor wind damage, as well as some short-lived impacts on ferry crossings, especially in exposed areas of western Scotland and eastern areas of Northern Ireland.

“Later in the day, parts of southeast England could experience winds of around 55mph, which may impact the English Channel too.”

The forecaster’s large scale yellow weather warning covers five regions in Scotland and warns: “A deep area of low pressure to the far north and northwest of Scotland will push active fronts across the UK on Friday, bringing strong winds to the Western then Northern Isles of Scotland.

“The strongest winds are likely to be the southerlies ahead of the front, with gusts of 65 to 70 mph in coastal parts and perhaps 75 mph around the Northern Isles.” 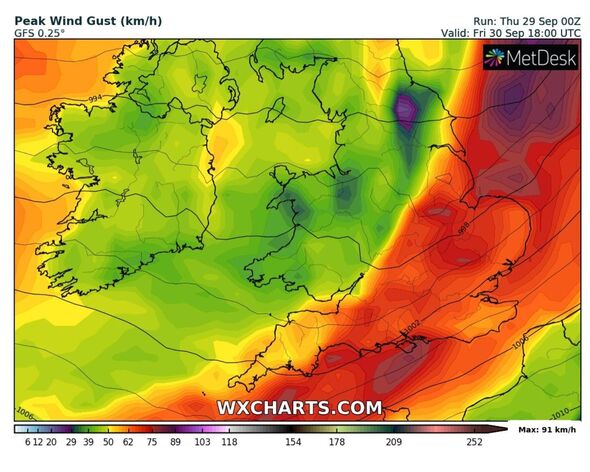 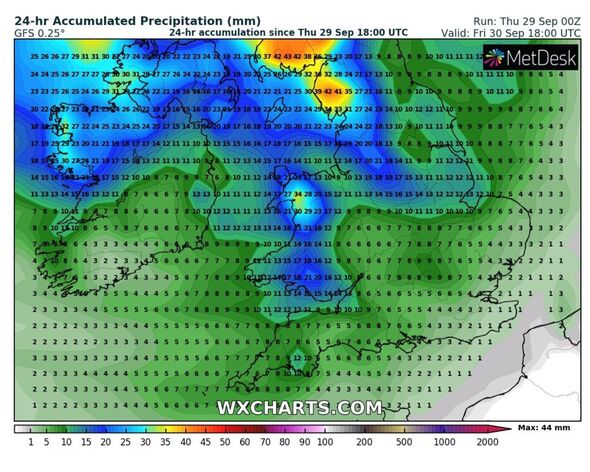 Jim Dale, senior meteorologist at British Weather Services told Express.co.uk almost the entire country would feel some effects, but that Hurricane Ian was not solely responsible for the UK’s first bout of autumnal weather.

He added: “The areas highlighted are likely highest impacted, but more or less everywhere will see notable rain, some heavy & brisk/strong winds. We highlight mountain areas & west/ south coasts as most prone.

“Hurricane Ian has a very tentative link but there is something in it. That warm/humid air gets caught up in the jet stream, so the feed of that air could well add an extra spice. But it’s not Ian per se.”

Maps from WX Charts show winds will remain strongest in the north west throughout the day, reaching its severe gale category off the western coast of Liverpool by midday.

This will maintain until at least 9pm, which is six hours after western Scotland’s warning for wind and rain expires, according to WX Charts interactive weather model.

But its wind chart does, however, show the stream moving towards the south east by about 6pm.

The Met Office says the mercury will recover next week, with temperatures peaking to above average for the time of year in some places.

It said: “The wet and windy theme will continue for more northwestern areas into next week with the driest and brightest weather across more southeastern areas of the UK. However, it’ll feel warmer across the country as many will see temperatures return to average or perhaps a little above.”