The UK government plans to declare the entirety of Hamas as a terrorist organisation, in a move led by Home Secretary Priti Patel.

Previously only the military wing of the Palestinian Islamist organisation, Izz al-Din al-Qassam Brigades, was proscribed under the Terrorism Act 2000.

Ms Patel said this created an “artificial distinction” between parts of an organisation which has “significant terrorist capacity”. Showing support for Hamas – including organising events in support of them and flying the movement’s flag – could see punishments of up to 14 years in prison.

The proscription would put the UK in line with Israel, the US and the EU in its approach to Hamas.

Earlies this year, Hamas engaged with Israel in the worst conflict since 2014.

In a tweet, Ms Patel said: “This government is committed to tackling extremism and terrorism wherever it occurs.”

In an accompanying statement, she added: “Hamas has significant terrorist capability, including access to extensive and sophisticated weaponry, as well as terrorist training facilities. That is why today I have acted to proscribe Hamas in its entirety.”

The move would require approval by Parliament. A proscription order was introduced today and debating and voting were expected to follow. 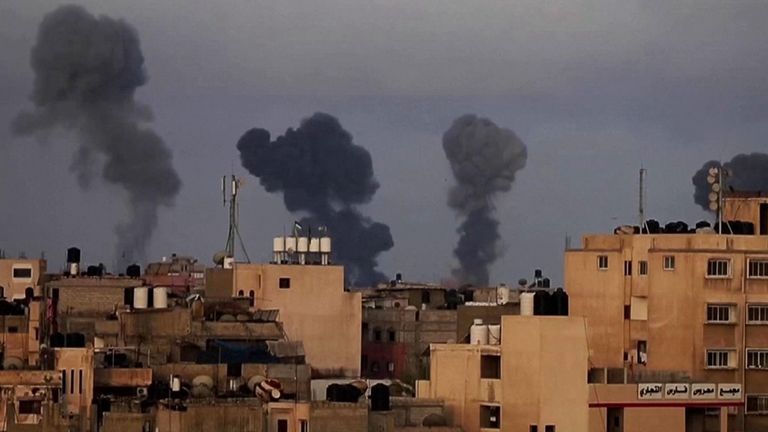 In a response sent to Sky News, Hamas expressed its “shock and dismay” at the move.

It called on the government to apologise for the Balfour Declaration, which called for the creation of a “national home for the Jewish people” in Palestine in 1917.

The statement added: “The Palestinian people, backed by the Arab and Muslim nations and the free people of the world, will continue their fight for freedom and return at any cost and will not be discouraged by those who failed to support them.

“We are confident that the Palestinians will fulfil their aspirations for freedom and independence sooner or later.

Speaking the in the US today, Ms Patel said: “Hamas is fundamentally and rabidly antisemitic. Antisemitism is an enduring evil which I will never tolerate.

“Jewish people routinely feel unsafe – at school, in the streets, when they worship, in their homes, and online.

“This step will strengthen the case against anyone who waves a Hamas flag in the United Kingdom, an act that is bound to make Jewish people feel unsafe.”

The Home office said the decision to proscribe Hamas was made following advice from the cross-government Proscription Review Group.

And Ms Patel hinted that others could be proscribed if they support terrorism.

She said: “This is only one proscription I’ve announced today, and I’ve mentioned other proscriptions too.

“But fundamentally, we can never, ever take our eye off the ball when it comes to those countries – Iran being one of them, I’ve referenced others too – that are out there to completely destroy our values, our way of life, do us the ultimate harm.”