Heroes come in all sizes — and so do hero rats.

An African giant pouched rat named Magawa has been awarded a mini gold medal for animal bravery, after using its big nose to sniff out dozens of treacherous landmines in Cambodia.

The not-so-little rodent, which holds the official job title of “HeroRAT,” has sniffed out 39 unexploded land mines and 28 munitions over the last four years. Magawa’s work is thought to have saved many lives in Cambodia, where decades of conflict have left the country littered with forgotten explosives that can kill or maim a person without warning.

The People’s Dispensary for Sick Animals (PDSA), a U.K.-based veterinary charity, named Magawa as its annual recipient for the gold medal on Friday. The medal is the U.K.’s animal equivalent of the George Cross, the highest honour for recognizing heroism.

“Magawa is a hero rat. We’re thrilled to celebrate his life-saving devotion by awarding him the PDSA gold medal,” PDSA’s director general Jan McLouglin said in a video ceremony for the rodent. 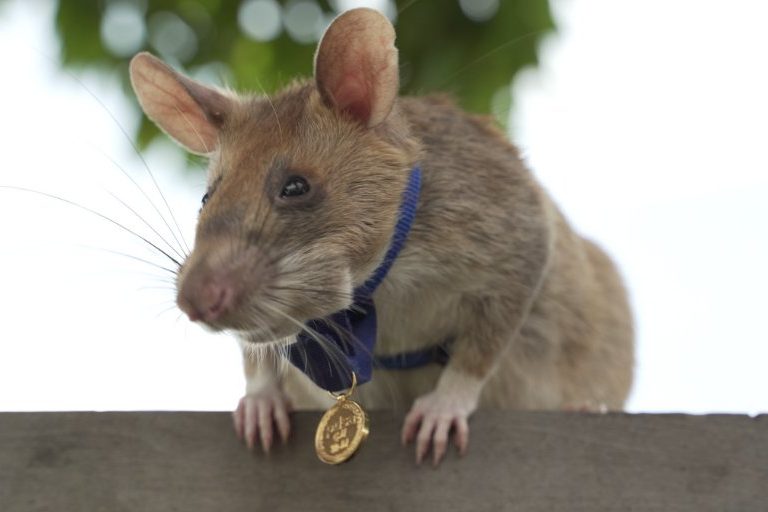 It’s the first time a rat has won the PDSA gold medal, which is handed out to animals that demonstrate “life-saving bravery and devotion to duty.”

Past winners have included horses, dogs and pigeons.

Magawa learned to detect the scent of explosive chemicals at APOPO, a Tanzania-based NGO. The charity breeds and trains rats to sniff out landmines and tuberculosis using their sensitive noses.

“We use clicker training to teach rats like Magawa to scratch at the ground above a landmine,” said APOPO CEO Christophe Cox in a statement. “During training they hear a ‘click’ and receive a tasty food reward for finding the correct target scent.”

The rodents are clever and light enough to avoid triggering landmines, though they might trigger a heart attack if you caught them in your own home. Their bodies can grow up to 45 centimetres (17 inches) long, and they can weigh up to 2.8 kilograms (6 pounds).

Buried explosives have killed nearly 20,000 people and injured 45,000 more in Cambodia over the last four decades, according to the Cambodian Mine Action and Victim Assistance Authority. The country has tens of thousands of amputees due to landmines.

More than five million landmines are thought to have been buried in Cambodia during conflicts in the 1980s and ’90s.

Magawa is the most accomplished APOPO graduate, having cleared more than 141,000 square metres of land, the PDSA says. The not-so-little creature can clear the area of a tennis court in about 20 minutes, whereas a human with a metal detector could spend up to four days sweeping the same area. Magawa also knows to disregard scrap metal along the way, according to APOPO.

“He is very quick and decisive,” Magawa’s handler, who goes by Malen, said in a PDSA statement. “But he is also the first one to take a nap during a break.”

The five-year-old rodent might be the Big Cheese of minesweepers right now, but he won’t be for much longer. Most rats retire after about six years of work, according to APOPO’s website.

Magawa can look forward to a retirement filled with playtime, peanuts and relaxation, the PDSA says.

“He is very special to me,” Malen added. “He has found many landmines in his career and saved many lives of the Cambodian people.”