Gerry Kulzer, the new butter sculptor at the Minnesota State Fair, is ready to capture the likenesses of the dairy princesses, if only he can sculpt their tresses in time.

Gerry Kulzer, an art teacher and sculptor, practicing with clay ahead of the Minnesota State Fair, where he’ll be the new resident butter sculptor.Credit…Nate Ryan for The New York Times

In August 2020, the pandemic left the Minnesota State Fair’s veteran butter sculptor, Linda Christensen, stranded at her home in California. The fair that summer had been canceled, but the dairy chiseling would go on. After decades sculpting the fair’s dairy princesses, she knew of only one artist who could take her place: her apprentice, Gerry Kulzer.

Mr. Kulzer — who had created only four other butter busts before, compared with the hundreds Ms. Christensen made over 50 years — was tasked with sculpting 90-pound blocks of Grade AA salted butter into soft reflections of the dairy-princess contestants who sat in front of him, as Ms. Christensen kept a close eye via Zoom on an iPad.

“To capture a person’s likeness is really tough,” said Mr. Kulzer, 53, of Litchfield, Minn. “Especially when you’re in a 40-degree refrigerator.”

Ms. Christensen retired last year, and on Thursday Mr. Kulzer will take over as the fair’s official butter sculptor, carving portraits of the competition’s winner, the Princess Kay of the Milky Way, and the nine finalists. Along with his new title come sculptural challenges by the tablespoon. 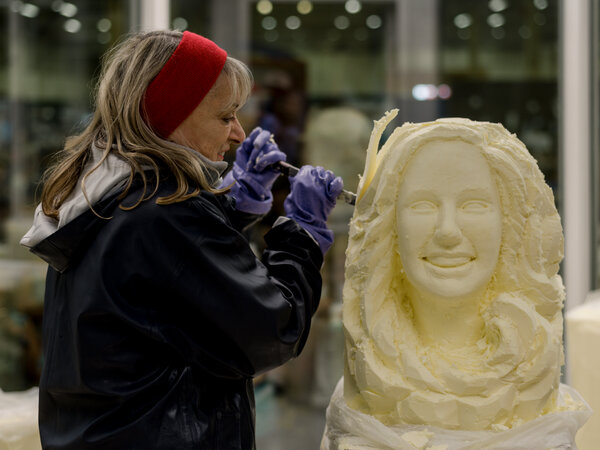 Mr. Kulzer, an art teacher at Eden Valley-Watkins High School who specializes in sculpture, spent two years shadowing Ms. Christensen in order to learn the intricacies of working with cold butter, which is harder to manipulate than the soft-water-based clay he’s accustomed to. (Butter is more difficult to layer than clay, as he realized back in 2020 when he took too much off someone’s nose and had to rebuild it.)

Teaching is the second-best job in the world, he said. “The first is carving butter heads.”

In 2019, Ms. Christensen and the Midwest Dairy trade group chose Mr. Kulzer as an apprentice from a pool of five applicants because of his skills at sculpting and bronze casting, and because of his personal background. He grew up on a Minnesota grain farm and would help on his cousins’ dairy farm, which gave him an intimate understanding of the fair’s butter-sculpting tradition.

As he trained, Mr. Kulzer mirrored Ms. Christensen. They worked on a butter bust of a Minnesota farmworker together, making sure that their eyes and smiles were aligned as they carved. He observed Ms. Christensen carefully, paying attention to how she shaped mouths and created detailed hairstyles.

Last year, after she finished her final bust, Ms. Christensen gave Mr. Kulzer the dull knife, named “Old Faithful,” that she had found at a secondhand store and used for 40 years. He made a leather sheath for the tool and had her sign it.

“It’s always hard to let go of something you’ve done for 50 years,” said Ms. Christensen, 80, who lived in Minneapolis for most of her life. “But he made it pretty easy.”

His style will be different from hers. He likes to incorporate people’s personalities into the busts with details like a slight head tilt. His smiles are less toothy.

To prepare for this week’s fair, Mr. Kulzer spent several days a week in his studio working on his sculpting speed using clay, the medium he says is closest to butter. When he filled in for Ms. Christensen two years ago, he struggled to finish the hairstyles for the finalists’ busts in the eight hours allotted for each.

“I’ve got to make sure I’m moving,” he said. “I can’t fiddle around and say this isn’t right.”

Butter sculptures first appeared at the Minnesota State Fair more than a century ago. In 1965, a dairy trade group began the fair’s tradition of sculpting the finalists in Midwest Dairy’s pageant, which began about a decade earlier (the Associated Milk Producers, a trade group, has donated the 900 pounds of butter needed for the art since 1993). The contest honors young female leaders in the state’s dairy industry; the winner is crowned the night before the fair begins, and greets guests at 6 a.m. as they enter the gates.

She will then bundle up in warm clothing to sit for Mr. Kulzer in the spinning “butter booth,” a glass-enclosed circular refrigerator where he’ll spend the next two days carving her likeness before moving on to the finalists, all in view of the crowds at the fair, which runs through Sept. 5.

To keep the butter from sticking to his body in the refrigerated work space, Mr. Kulzer wears several layers of clothing, including a waterproof rain suit, as well as the rubber-coated gloves that grocery store workers typically wear.

The two-day sitting is required for Princess Kay of the Milky Way because of all the media interviews she must participate in as he works. Between interviews, Mr. Kulzer will ask the princess to move her head around at different angles so he can capture the details of her face. He will use a wire hoop and “Old Faithful” to slice off chunks of butter, and mold the squishy spread to create noses, smiles and pieces of hair.

“I always imagined what it’d be like to be one of those girls in the butter booth,” said Brenna Connelly, 21, of Byron, Minn. In 2020, she was the first Princess Kay of the Milky Way whom Mr. Kulzer ever sculpted. “It was surreal to be on the other side.”

The finished busts are added to a stand within the butter booth, where they’ll continue to spin on display until the fair concludes. The women then take them home, along with five-gallon buckets of butter scraps. Some melt the heads and host parties with corn on the cob.

Others buy special freezers and preserve their heads for decades, later amassing a collection as their sisters and daughters inherit butter heads of their own.

Ms. Connelly used some of the butter, dug from the back of her own likeness, for her younger brother’s graduation pancake breakfast. He has called dibs on eventually eating the nose, but Ms. Connelly thinks she’ll keep Mr. Kulzer’s face work intact, at least for another few years.