Recent hot weather saw temperatures rise to higher than 30C in some parts of the UK, and the Met Office and BBC are predicting a return of the balmy temperatures next month. Temperatures are due to get chilly over the next couple of days, with the Met Office warning an area of low pressure will bring “fairly gusty conditions” and showers in a three-day wash-out just in time for the start of Wimbledon.

But summer will be in full swing by the end of June, and July is looking likely to be warm and settled.

“The recent two bouts of heat have been connected with the event in continental Europe, but we have also had influences from the Atlantic too which have brought in the unsettled and fresher conditions that we will also be experiencing from the weekend onward.

“The indication is that the unsettled conditions will ‘stick’ for a while, but it is always possible that another hot spell or two will be possible later in the summer. I certainly wouldn’t assume that summer is over.” 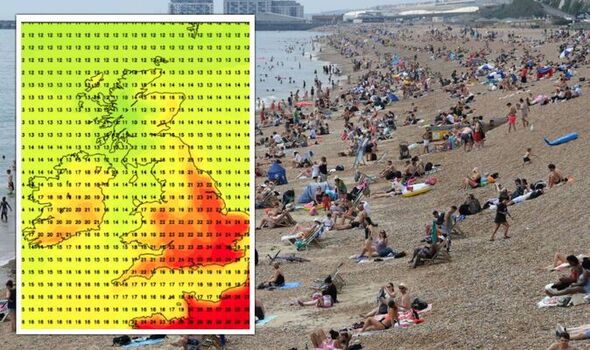 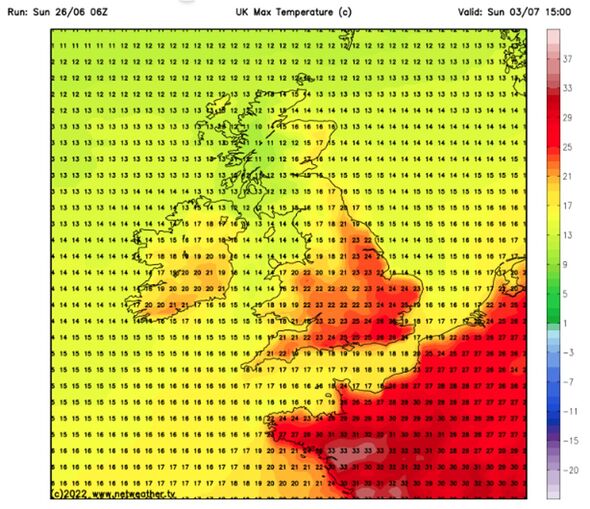 Will July be hot?

According to the BBC’s monthly outlook, July will kick off with high-pressure building over Scotland and the North of England, making for dry and calm conditions with temperatures higher than average for the time of year.

Charts from Netweather show much of the southeast of England will see temperatures of a balmy 20C to 23C on July 1, with the rest of the UK hovering at around 16 to 18C.

Into the weekend, the southeast will see the maps turn red with 26C forecast for London and the surrounding areas on Saturday, while again the rest of Britain remains cooler in the late teens. But Sunday will see the red hot conditions spread further, with almost the whole of the southeast seeing the mercury hit 21C to 26C, while 23C to 24C is expected in the midlands and creeping up the northeast coast.

Get the latest three-day weather forecast where you live. Find out by adding your postcode or visit InYourArea

From Monday, July 4 the BBC is forecasting the balmy conditions will continue, with a few cooler and breezier days in Scotland. the south of England will see the best of the weather, with 23C to 26C all weeks.

WXCharts maps show temperatures will rise to the late 20s around July 4.

July 5 will be a real scorcher for the whole country, with swathes of England to see 25C up to a maximum of 27C and this will continue well into the week with July 6, 7 and 8 all seeing rising temperatures with the mercury climbing to highs of 30C in the south east of England by the Friday.

Things will continue to heat up further from Monday, July 11 with continued high pressure, particularly in central and eastern England. 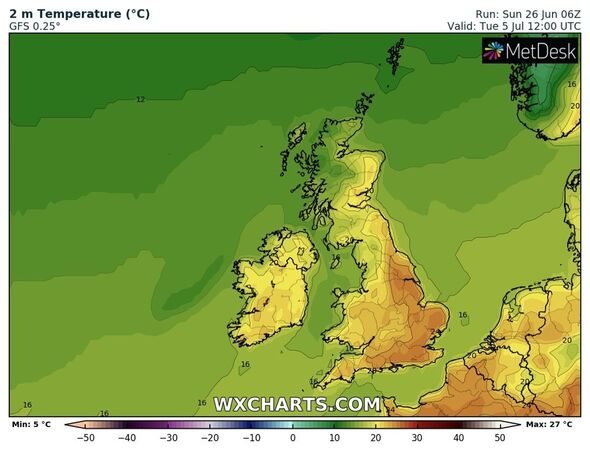 Temperatures are forecast to be warmer than usual across the UK, with scattered rainfall predicted across Scotland and Northern Ireland.

Even the bookies are predicting a hot summer for Brits, with Coral makes it odds-on at 1/2 for the UK to have its hottest ever summer in 2022.

Coral has put odds out of 5/4 for next month to be a record hot July, while it is 4/5 that the highest ever temperature in the UK (currently 38.7C) could be recorded in 2022.

Coral’s John Hill said: ”Our betting suggests things are going to get even hotter this summer, and by the time it is over, it will be the hottest summer the UK has ever had.”

“We make it odds-on for the highest ever UK temperature of 38.7C to be broken, while temperatures may even climb to as high as 40C.”