Wells Guthrie made fine wine, but financial challenges diverted his attention. Now he’s got a new label and a second chance, without distractions.

BOONVILLE, Calif. — This little town in the Anderson Valley of Mendocino County seems isolated enough. It’s a 40-minute drive west of the nearest major highway, mostly on the winding, two-lane Route 128, and it’s barely on the grid. But Wells Guthrie was looking for something even more secluded.

Not that Mr. Guthrie, who had won acclaim at Copain Wines for his delicate, nuanced pinot noirs and savory, saline syrahs, is a hermit or misanthropic. He’s friendly and genial. But his recent experiences in the wine business, he said, had been unpleasant and had left him somewhat shellshocked.

So, when it came time for him in 2018 to start his new label, DuPuis Wines, he not only came to Boonville — he has been exploring the terroirs of the Anderson Valley for years — but found a place on a hillside, four miles up from the town on a narrow, twisting road, with a turn onto an even more serpentine dirt road leading to an unmarked driveway.

This is where Mr. Guthrie, 51, is putting down new roots, starting fresh in a business that, even for the most prepared and determined small producer, can offer numerous pitfalls and obstacles.

He and his wife, Kate, and their blended family of five children now live in an old red barn here, right over the winery and within view of their estate vineyard, seven acres on a 40-acre hillside parcel with an olive grove and a redwood forest.

“To be here day to day is like a dream,” he said when I visited him in July. “To be intimately engaged at every moment, it’s rewarding and gratifying. I realize how little engaged I was before, even though I thought I was.” 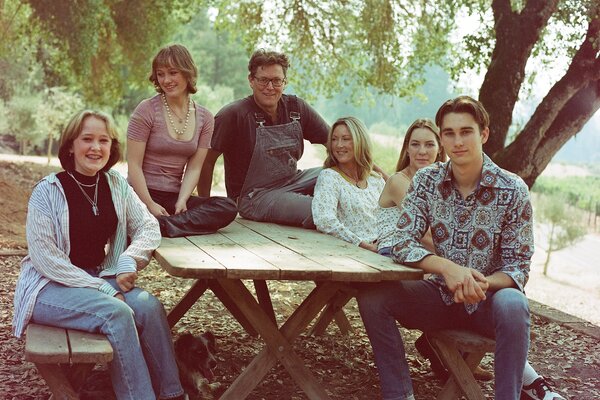 The vineyard, which he is farming organically, is small enough that he, Ms. Guthrie and a single employee, Cesar Maldonado, whom Mr. Guthrie called his right arm, can handle all the work.

“My wife drives the tractor, and I did all the pruning,” he said. “At least, it’s all mine. I get to touch every vine, and I’m not beholden to anybody else, even if I have to fix the toilets or an irrigation pump.”

These small chores and pleasures are important to Mr. Guthrie, given the upheaval that has governed his years in the wine business, turmoil unnoticeable to consumers who have simply been enjoying his wines.

By the time he founded Copain in 1999 with a partner, he had already been around. His first jobs were in France, working for Michel Chapoutier in the Northern Rhône Valley. That was followed by formative years in Burgundy at Domaine Dujac and Domaine Jacques-Frédéric Mugnier, two Côte de Nuits superstars who were to prove profoundly influential to Mr. Guthrie, both stylistically and in how they approached their craft.

Both are family domains, run by people dedicated to farming and making wine, humble even as their wines became among the most coveted in the world.

There, Mr. Guthrie also earned the nickname Puis, meaning, he said, “well” or “wells” in French slang, hence the new venture, DuPuis Wines, or “of Wells.”

Back in California, he was reintroduced to the American wine business, working stints at Turley Wine Cellars and Martinelli before founding Copain. His first pinot noirs at Copain were squarely in the California stylistic mainstream of the period, rich, plush and alcoholic, and they did well critically.

The problem was, Mr. Guthrie himself did not enjoy his wines. They lacked the transparency he had come to prize in Burgundy, and the grapes were so ripe at fermentation that he had to add tartaric acid to balance them and water to reduce the alcohol content, both compromises that went against his ethos of minimalist winemaking.

In 2006, Mr. Guthrie took the rare step in the wine business of changing his methods and style, even though his wines were popular with consumers. He reoriented his approach, aiming for freshness and delicacy rather than power and impact. In so doing, he joined a vanguard of California producers who were making the case for balanced, expressive wines that belonged at the table.

“It got to the point where I didn’t want the wine to be fatter than the food,” he told me in 2009. “Wine should make you think of what you want to eat.”

Even with the unexpected turn, Copain’s business seemed successful. Copain had been building a handsome winery outside of Healdsburg, Calif., and had planted a vineyard there, though after Mr. Guthrie changed course he decided the vineyard was in too warm a spot for the restrained wines he wanted to make. He sold the fruit rather than use it himself.

He and his partner, Kevin McQuown, a software developer, also opened a custom-crush facility not far away in Santa Rosa, where clients could use the equipment and space to make their own wines.

The future appeared bright, but for Copain the 2008 financial meltdown and subsequent recession was a catastrophe. The winery was already 40 percent over budget, and, after the meltdown, the market for his wines suddenly dried up.

“When the bubble burst, it was like the perfect storm,” said Mr. Guthrie, adding that in “markets like New York City, where we sold the wine, nobody was buying, restaurants were closing. We got overextended and it became untenable.”

In an effort to achieve some sort of financial stability, Mr. Guthrie said, they sold the custom-crush business in 2009. Mr. McQuown also departed, and Mr. Guthrie was in the position of having simultaneously to make more wine to pay his bills, and to invest more in the company to expand.

When he wasn’t visiting the vineyards from which Copain was buying fruit, stretching from the Central Coast to the Anderson Valley, he was visiting markets around the country, trying to sell wine. It was a never-ending game of catch-up.

Copain hung on — the wines were excellent, but it was a struggle for Mr. Guthrie. Finally, in 2016, he sold Copain to Jackson Family Wines, a multinational wine powerhouse. Under the terms of the sale, he would work for Jackson for two years running Copain.

Corporate life was a frustrating, unhappy experience for Mr. Guthrie. For a man who values independence, he was now answering to bosses who were both trying to increase production and limit spending. At the conclusion of his contract in 2018, Mr. Guthrie left.

“I had some dark days after I sold the brand,” he said. “Where’s the happy ending?”

It wouldn’t take long to find one. As he tells it, the Boonville estate, with its vineyard planted in 2002 and barn that could be converted into a winery, practically fell into his lap. For Mr. Guthrie, who over time had become drawn more and more to the Anderson Valley, it was perfect. He and his family moved in and, on the fly, made the first vintage in 2018.

What had soured Mr. Guthrie over the previous decade were all the tasks associated with the business side of the wine industry, never the wine itself. He no longer wanted to have to justify farming or winemaking decisions to others.

He had, for example, determined in the last few years that he had been bottling the Copain wines too soon, leaving them too tightly wound when consumers popped the corks. Longer aging before bottling would improve them, he thought, even if sales would be delayed. But he said his bosses refused to consider the request.

Now, he would decide for himself. What’s more, he would stay small, concentrating on his vineyard and a few others nearby rather than traveling the state. He would focus on the wine rather than on marketing and sales.

It hasn’t been simple. The Covid-19 pandemic arrived just as he was going to build his winery. Unable to hire workers, he largely did it himself, filling the 800-square-foot space with used equipment, including tanks and an old forklift he bought on eBay.

“Living above the winery, I’m intimately engaged at every moment,” he said. “A redwood barn among the redwoods — it’s very California, nothing fancy, but it’s pretty idyllic.”

Yet it’s not without insecurities. The forest, which has not been cleared of brush and tinder in years, poses a significant fire threat. He’s put in fire lanes around the vineyard to protect it and applied for grants to help manage the adjacent forest. He couldn’t get fire insurance this year. Luckily, he was able to harvest the grapes without incident.

His wines continue to be terrific — nuanced and full of character. I particularly liked his floral 2019 estate pinot noir, a gorgeous 2018 Baker Ranch and an earthy, high-toned 2019 Le Benedict pinot noir, named after his dear friend Ned Benedict, a much-loved fixture of the New York wine trade who died in an accident in Spain in 2019.

Without the distractions he faced at Copain, Mr. Guthrie is considering several projects. He wants to replace some of his pinot noir vines with chardonnay — why not? — but also with aligoté, poulsard, trousseau and gamay, grapes that have ardent fans but not much in the way of a mainstream following.

The bean counters would no doubt be disturbed. But Mr. Guthrie does not have to worry about them anymore.

“All in all, I’m thrilled to have landed here,” he said. “Sometimes I pinch myself.”