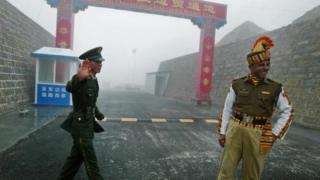 A military stand-off between India and China on their disputed border in the Himalayas has escalated into deadly clashes.

In 400 words, here is all the important background to help you understand what is going on.

What happened in the clash?

Three Indian soldiers were killed in a “violent face-off” with Chinese forces on Monday night. The confrontation happened in Galwan Valley in Ladakh, a disputed area in the Kashmir region.

Both sides insisted no shots were fired. There were reports of Chinese casualties, but no official confirmation.

Military officials from both countries were meeting to “defuse the situation”, the Indian army said.

Why are they fighting?

The military superpowers have been arguing for decades over territory in the high-altitude, largely uninhabited region.

Monday’s confrontation came after tensions bubbled up in recent months over a new road India built in Ladakh, along the Line of Actual Control which divides the sides.

That angered China, which deployed troops and built infrastructure of its own in disputed territory, bringing the two sides’ forces in closer proximity and heightening the risk of clashes.

Why does it matter?

Both sides see the area as strategically important, economically and militarily.

If neither gives way, the stand-off could have destabilising consequences for the region.

The loss of life raises the stakes. Those deaths are believed to be the first in 45 years in a border confrontation between India and China.

They have fought only one war, in 1962, when India suffered a humiliating defeat.

How dangerous could this be?

Potentially very, if efforts are not made to reduce tensions.

On Tuesday, India’s army said a de-escalation process was under way. And in recent days, army generals from India and China have been involved in talks aimed at resolving the border row.

However, it remains to be seen if the talks are successful, as similar reconciliation attempts have stalled in the past.

If they are not, some analysts believe there is a risk of further clashes between their militaries.

“This is extremely, extremely serious, this is going to vitiate whatever dialogue was going on,” former Indian army commander DS Hooda said, commenting on Monday’s clash.