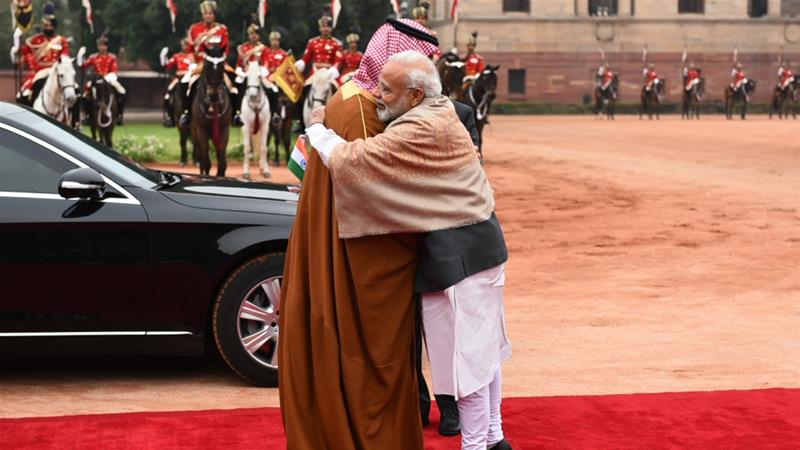 Prince Mohammed, also known as MBS, arrived on a two-day visit to India on Tuesday hoping to boost trade and energy ties following a high-profile trip to neighbouring Pakistan.

India and Saudi Arabia signed five agreements on infrastructure, investment, tourism, housing, broadcasting and for the setting up of a “strategic partnership council”.

The Indian prime minister broke with protocol when he went to the airport and hugged the embattled Saudi prince, who has been trying to rebuild his reputation in the wake of the murder of Saudi journalist Jamal Khashoggi.

The prime minister is supposed to meet foreign leaders at a formal ceremony at the presidential palace, not on the runways of airports.

Michael Kugelman at the Wilson Center in Washington

“We need to focus on regional security and stability which is a concern for both countries.

“Saudi Arabia and India should work together in Afghanistan, there is a golden opportunity here. India can also offer its diplomatic services to reduce the distrust between Saudi Arabia and Iran,” he added.

MBS’s Asia tour coincided with hostilities between New Delhi and Islamabad flaring up last week, after a suicide bombing in the India-administered Kashmir killed at least 40 paramilitary personnel.

New Delhi has accused Islamabad of complicity in the attack, a charge Pakistan denies.

The Indian prime minister referred to the attack during a joint press conference with Prince Mohammed and claimed there is an agreement with Riyadh “to put pressure on all countries supporting terrorism”.

MBS responded by saying “terrorism and extremism is a common concern” for India and Saudi Arabia. However, he did not mention Pakistan.

“I want to state that we are ready to cooperate with India in every way, including through intelligence sharing,” the crown prince said. He said India and all “neighbouring countries must work together”.

Later, a joint statement released after the press conference said: “The Prime Minister and His Royal Highness condemned in the strongest terms, the recent terrorist attack on Indian security forces on 14 February, 2019 in Pulwama in Jammu and Kashmir.”

Both leaders seemed eager to nurture a strong relationship.

“The relationship between India and Saudi Arabia is in our DNA. Indians are part of building Saudi Arabia for 70 years,” MBS said after a ceremonial welcome at Hyderabad House in New Delhi.

India has always had “historical and friendly” ties with Saudi Arabia, Modi said at a joint press meet on Wednesday following, what he called, the “comprehensive” talks with Prince Mohammed.

“India and Saudi Arabia ties will be a factor for stability, peace and security in our region and the world,” Modi said in an interview to the Saudi Gazette on Tuesday.

On Wednesday, MBS announced an agreement to look at initial investment in its National Investment and Infrastructure Fund, a quasi-sovereign wealth fund, to help accelerate the building of ports and highways in India.

“The Saudis investing in this fund is a big deal. They have been talking for a long time about contributing its resources for Indian infrastructure development. This is an area of long-term interest for India,” former Indian envoy Ahmad said.

Prince Mohammed’s visit came close on the heels of his trip to India’s rival Pakistan, which was the first stop of an Asia trip that also includes China. On Sunday, Saudi Arabia announced agreements with Pakistan worth $20bn.

India’s ties to Saudi Arabia have grown significantly over the past two decades, with bilateral trade hitting $28bn. Home to more than 2.7 million Indian expatriates, the kingdom is India’s fourth-largest trading partner.

Saudi Aramco, the state oil company, has plans to set up a large refinery in India, but the project has been delayed due to land acquisition issues.

Amin Nasser, CEO of Aramco, said on Wednesday that “India is an investment priority” for the company.

Riyadh is the top source of India’s energy supplies, supplying 20 percent of its crude oil.

“These are large amounts of money, and there’s a good reason to believe that such sums could come with strings attached. Let’s be clear – such large sums are not given out of charity, they’re given in order to further interests,” Michael Kugelman at the Wilson Center in Washington told Al Jazeera.

“MBS may be delivering this assistance on the condition that Pakistan and India move closer to the Saudis and put more distance between themselves and Iran. That’s a tall order for New Delhi, which has a deep and extensive energy relationship with Tehran,” he said.

With the noose of the US sanctions tightening on Iran’s oil exports, Saudi Arabia is one of the countries Indian oil companies are looking at to cover most of the supply shortfall in case Tehran’s oil exports dry up.

India, the world’s third-biggest oil consumer, meets more than 80 percent of its oil needs through imports.

Prince Mohammed has been battling a major political crisis in the wake of Khashoggi’s killing in the kingdom’s consulate in Istanbul in October.

“For MBS, the visits to Pakistan and India are more about image management than anything else,” analyst Kugelman said.

“Prince Salman knows that Saudi Arabia’s reputation has taken a major hit, and he’s keen to demonstrate to the world that his country continues to have friends and do business.”