About 3,000 people came out of Baghouz in eastern Syria through a humanitarian corridor, US-backed SDF rebels say. 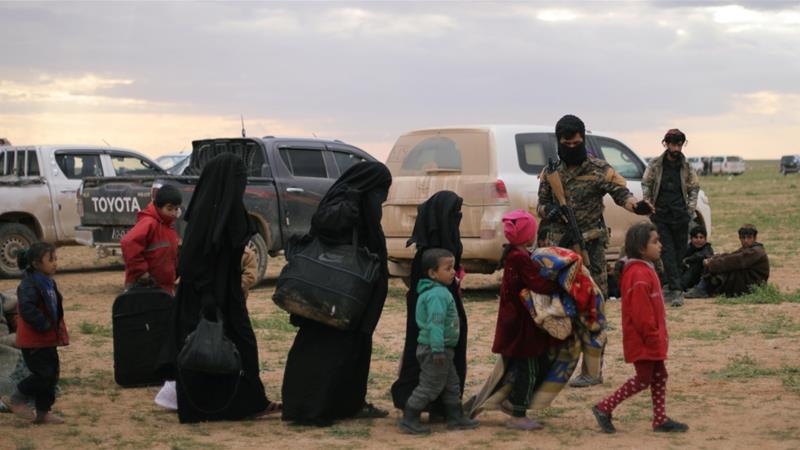 Thousands of people, including armed fighters, have left the last area held by ISIL in Syria, a spokesperson for the US-backed Syrian Democratic Forces (SDF) said.

Mostafa Bali of the SDF tweeted that about 3,000 people had come out of the village of Baghouz in eastern Syria on Monday through a humanitarian corridor established by the Kurdish-led group for those who want to leave or surrender.

Bali said among those who left was a large number of fighters of the Islamic State of Iraq and the Levant (ISIL or ISIS) group who “surrendered to our forces”.

The evacuations came as the US-backed forces slowed down their latest push on Baghouz, the last shred of ISIL-held territory, to allow civilians to leave the tiny enclave.

It is unclear how many ISIL fighters and civilians remain inside, but the number is likely in the hundreds, according to local activists.

Since February 20, more than 10,000 people have left the pocket, producing dramatic scenes of women shrouded in black and many children climbing off trucks in the desert to be screened and searched.

They were then whisked off to a camp for displaced persons to the north, while suspected fighters were moved to detention facilities.

Meanwhile, a Red Cross official said the weak and fragile services at the al-Hol camp in northeastern Syria, which has been in recent weeks inundated with civilians and ISIL fighters fleeing from Baghouz, are on “the brink of collapse”.

Robert Mardini of the International Committee for the Red Cross said in New York that the population in the camp has risen from 34,000 at the beginning of December to 45,000 now. He said several thousand mainly women and children arrive daily and there is “no end in sight”.

Mardini says those coming out of Baghouz are “sick, injured, tired, afraid” and the situation at the camp is “overwhelming”.

He also said says the international Red Cross is ready to help with any repatriations of ISIL fighters and their families provided agreements are negotiated with their home countries.

Mardini called this “one of the most complex issues, not only from a humanitarian sense but also from whether countries want their nationals to return or not”.