Joe Biden says ‘give me a break man’

The new Democratic US President took the oath of office on Wednesday and quickly got to work after his predecessor Donald Trump left the White House. He has already put the pandemic at the top of his list of challenges he faces in his administration’s early days, including rebuilding a ravaged economy and addressing racial injustice. But Mr Biden may be facing a bigger threat from his opposition in just hours of starting his new role.

Republican congresswoman Marjorie Taylor Greene said she has filed articles of impeachment against the new President.

Posting a video on social media, she told her followers: “I’ve just filed articles of impeachment on president Joe Biden.

Ms Greene has made no secret of her support for Mr Trump during his term as President. 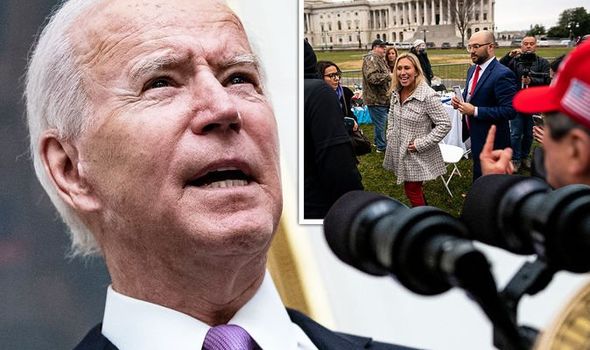 The congresswoman claimed that he lost the US election to Mr Biden due to voter fraud.

She was also recently blocked from using Twitter after the Capital attack on January 6 for violating the rules of use.

Ms Greene previously claimed that Mr Biden should be impeached for an alleged abuse of power.

She added this was due to his family’s business connections in China and Ukraine when he served as Vice President in the Obama administration.

DON’T MISS
Joe Biden health fears: President seen coughing and spluttering [REVEALED]
Joe Biden mutters ‘God Save the Queen’ after US election in footage [VIDEO]
Biden mocked for being the ‘not-Trump President’ without an agenda [REACTION]