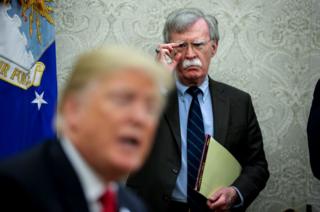 Mr Bolton – also the former US envoy to the UN – was fired by President Donald Trump after repeated policy feuds. Who is he?

“A disgruntled boring fool who only wanted to go to war. Never had a clue, was ostracized & happily dumped. What a dope!” the president tweeted on 18 June.

It followed a preview by US media of Mr Bolton’s book, The Room Where It Happened, which is due to go on sale on 23 June.

Mr Bolton left his post in September 2019, saying he had decided to quit. Mr Trump tweeted then that he had fired him, and “disagreed strongly with many of his suggestions, as did others in the Administration”.

In 2018, the president’s decision to appoint Mr Bolton came as a surprise.

After taking office Mr Trump was reported to have decided against naming Mr Bolton secretary of state as he disliked his walrus moustache.

The strident Bush administration neo-conservative remains an unapologetic cheerleader of the 2003 Iraq war, which the US president himself once lambasted as “a big mistake”.

But the Republican was also once memorably branded by a cable television host as “a massive neocon on steroids”.

Kentucky Republican Senator Rand Paul described Mr Bolton in an op-ed as “hell-bent on repeating virtually every foreign policy mistake the US has made in the last 15 years”.

A Baltimore fireman’s son, Mr Bolton has been a staunch conservative from his boyhood.

At the age of 15 he took time off school to campaign for Barry Goldwater in the 1964 presidential campaign.

At Yale University, where he studied law with the help of a scholarship, he recalled in his memoir feeling like a “space alien” among the campus anti-Vietnam war activists.

Bill and Hillary Clinton were among his classmates at Yale, but he said he “didn’t run in their circles”.

He did befriend future Supreme Court Justice Clarence Thomas when they lived in a dormitory together.

Richard Blumenthal, now a Democratic Senator for Connecticut, was Mr Bolton’s editor on the student newspaper.

Despite his penchant for sabre-rattling, Mr Bolton declined to fight for his country when the first opportunity arose.

As the Vietnam War raged, Mr Bolton avoided the draft by joining the National Guard.

In his memoir he said he did so because he felt the war had already been lost by liberals who were preventing America from taking necessary steps to win.

“I wasn’t going to waste time on a futile struggle,” Mr Bolton wrote.

“Dying for your country was one thing, but dying to gain territory that antiwar forces in Congress would simply return to the enemy seemed ludicrous to me. Looking back, I am not terribly proud of this calculation.”

Mr Bolton went on to serve in the administrations of Ronald Reagan, George HW Bush and George W Bush.

He ruffled feathers in the second Bush administration where he initially worked as US Department of State under-secretary for arms control.

Mr Bolton was accused of trying to force out two intelligence analysts who disagreed with him and of seeking to undermine his boss, Colin Powell.

He also helped build the case that Saddam Hussein possessed weapons of mass destruction, which turned out to be wrong.

But Mr Bolton was praised for his work establishing the Proliferation Security Initiative, an international agreement to prohibit fissile material shipments.

Nevertheless, President Bush dismayed diplomats when he named Mr Bolton as US ambassador to the United Nations.

More than 100 former US envoys signed a letter urging senators to reject the nomination.

This was, after all, the man who had once said there was “no such thing” as the UN and called the US the world’s “only real power”.

Mr Bolton had also previously declared that if the 38-storey UN building “lost 10 storeys today, it wouldn’t make a bit of difference”.

President Bush had to use a recess appointment to crowbar Mr Bolton into the job in 2005 after Senate Democrats, and even a few Republicans, blocked the move.

Democrats ultimately refused to confirm Mr Bolton and he had to step down when his appointment expired in January 2007.

Diplomats at the UN privately criticised his style as abrasive.

Even the state department was not spared the ire of Mr Bolton, who is known for his scorn of dovish multilateral institutions.

He once derided careerists at the US foreign ministry as having been “schooled in accommodation and compromise with foreigners, rather than aggressive advocacy of US interests”.

Mr Bolton, formerly a senior fellow at the American Enterprise Institute, did not appear to have modified his views since his last spell in government.

His interventionist proclivities reportedly angered President Trump, who in early 2019 was said to have accused Mr Bolton of trying to drag the US into a war with Venezuela.

Mr Bolton did not appear to enjoy the same access to this White House’s inner circle as he did in the Bush era.

Mr Trump sometimes confusedly called him “Mike”, according to the New York Times.

As he briefly weighed his own run for the US presidency in 2016, Mr Bolton called in an op-ed for Iran to be bombed.

And in an op-ed for the Wall Street Journal published shortly before being appointed by Mr Trump, he set out the case for a pre-emptive strike on North Korea.

After rejoining the White House, however, Mr Bolton tempered his tone, saying: “You have to know in advance the president’s views are not always yours.”