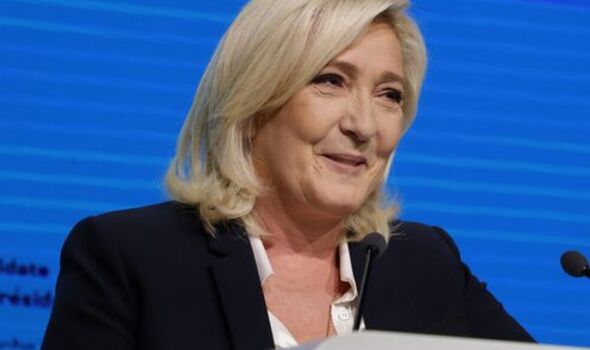 Ms Le Pen will take on the French President in two weeks’ time in a re-run of the 2017 contest, which saw voters emphatically back Mr Macron by 66 percent to 34 percent.

Mr Macron came out on top, falling short of 10million votes on 27.6 percent after 99 percent of ballots were counted.

Ms Le Pen received the next largest share of the vote with 23.4 percent.

However, Ms Le Pen did face a challenge from the far-left Eurosceptic candidate Jean-Luc Melenchon.

Mr Melenchon, who finished in fourth place five years ago, received 22 percent of the vote, leaving him just 1.4 points behind Ms Le Pen.

Despite sitting on the left of the political spectrum, the Bouches-du-Rhone MP and La France Insoumise leader has been critical of the Brussels bloc.

Ex-BBC journalist Andrew Neil pointed out how Melenchon had shaken up the first round of voting.

“They will consolidate Macron’s lead — and have Melenchon breathing down Le Pen’s neck.”

However, Ms Le Pen also increased her vote share compared to 2017 and appears confident she can narrow the gap against Mr Macron when polling stations open for a second time.

She said: “I believe this is going to happen on April 24.”

An opinion poll produced by Ifo-Fiducial suggested the second round was on a knife-edge after 51 percent of respondents said they would vote for Macron and 49 percent voiced support for Le Pen.

But most of the losing candidates have called on French voters to block Ms Le Pen from the Elysee Palace.

Melenchon told his supporters: “There must not be one single vote for Le Pen in the second round.”

Conservative candidate Valerie Pecresse, who received just X percent as the centre-right coalition was confounded to its worst result in a Presidential Election, said: “I will vote in conscience for Emmanuel Macron to avoid the coming to power of Marine Le Pen and the chaos that will result.”

But the Paris Mayor still took the opportunity to call on voters to steer away from the National Rally candidate.

She said: “I solemnly call on you to vote on 24 April against the far-right of Marine Le Pen.”

Mr Zemmour, who polled in fourth place on little over seven percent, said: “If electorally nothing changes, politically everything has changed because we arrived.”