The terrifying video was filmed from inside a car in Bahrain yesterday when drivers were set upon by millions of locusts. The swarm has made its way from East Africa to China, via the Middle East, Pakistan and India.

The sky above Bahrain, usually a bathed in sunshine, can be seen turning dark as the swarm cloud moves over the road.

At one point, one of the insects drops onto the photographer’s car and appears to be several inches long.

The apocalyptic scene in Bahrain saw some motorists stop their cars as visibility worsened.

This latest video comes after another driver filmed a cloud of locusts in an unknown location in Kenya earlier this month.

The current plague has been described by Pakistan’s Prime Minister Imran Khan as “the worst locust attack in decades”. 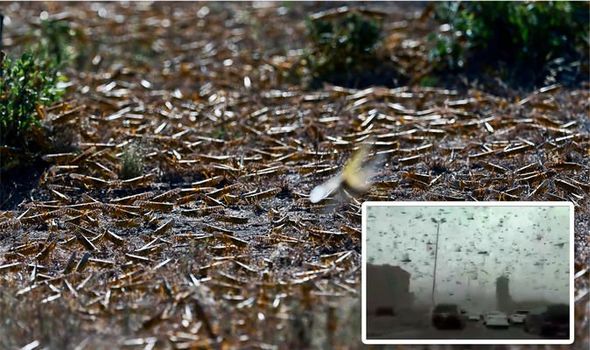 In this latest locust plague, one swarm in Kenya is said to have reached a length of 60km, which is further than the distance between Manchester and Liverpool, as the crow flies.

The insects have devastated crops wherever they have landed.

Pakistan declared a national emergency as a result of food shortages.

Desert locusts can travel up to 95 miles in a day and can eat their own body weight in plant material, meaning even a small swarm can consume as much food as 35,000 people in a day, according to the UN.

During each three-month breeding cycle, a single locust can breed 20 more, which is why the massive swarms are now threatening crops on either side of the Red Sea.

The UN has warned that an imminent second hatch of the insects could threaten the food security of 25 million people across the region.

The Food and Agriculture Organization of the United Nations has a locust watch bulletin.

Its latest update says the “situation remains extremely alarming in Kenya, Ethiopia and Somalia where widespread Desert Locust infestations and a new generation of breeding threatens food security and livelihoods in the region”. 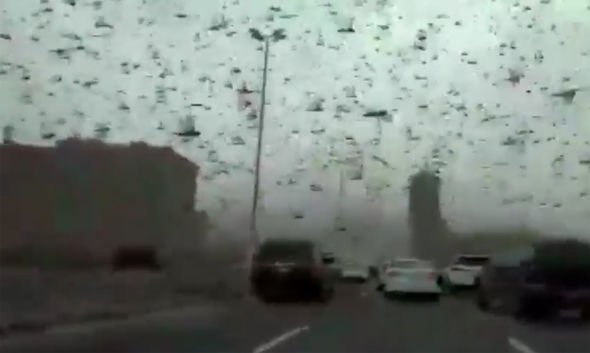 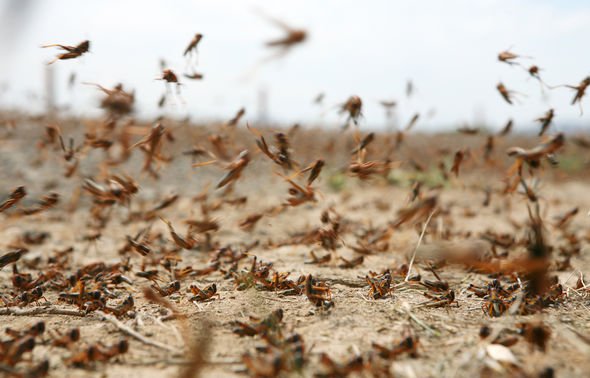 China has insisted it is not scared of the approaching plague of insects.

Officials have dispatched an army of 100,000 ducks to its Xinjiang border in the far west of the country, where it meets Pakistan and India, to deal with the locusts.

One Xinjiang resident told Chinese newspaper Global Times that previous locust outbreaks happened in the end of summer and autumn in the region’s grassland areas.

He said one duckling can “control” a 4sqm of land and eat the locusts. 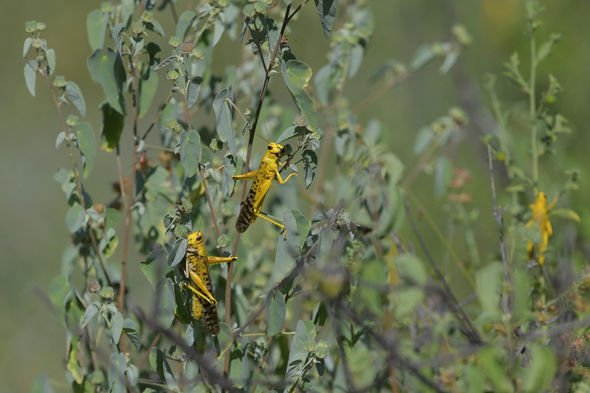 The Communist Party of China has tried to downplay the severity of the swarms reaching the country.

They claim their modern technology and sufficient stocks which have not been seen in Africa will prevent any widespread damage.

Billions of the insects have destroyed food supplies across Kenya, Somalia and Ethiopia.

With many of the population in the East Africa region already facing food shortages due to poverty, the UN warned action must be taken to avoid another “shock” for people in the area.