The Met Office has issued an amber weather warning for snow and advised travellers to expect delays today on the roads with cars and passengers standard and entire communities left without power. It comes as footage shared on social media showed a lorry jack-knifed on the M62 in northern England as traffic officers work in blizzard-like condition to reopen the road which has been brought to a near standstill.

Parts of South Yorkshire and parts of Derbyshire, West Yorkshire and Greater Manchester have also been placed under amber weather warning for snow is as of 3am this morning with warning set to last until 1 pm.

Between 3cm and 8cm of snow is likely across the area, with 10cm to 15cm possible in areas above 200 metres.

Forecasters said motorists who brave the roads are at risk of becoming stranded, while rail and air cancellations are likely. 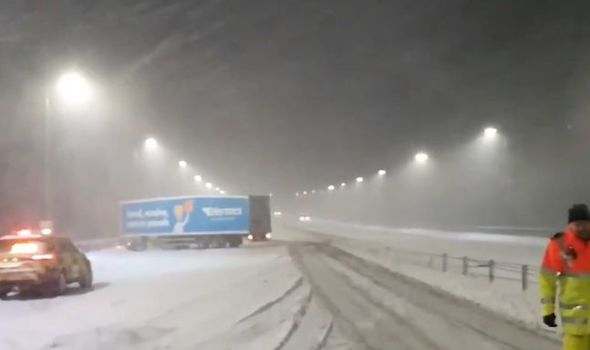