BEIRUT (Reuters) – French President Emmanuel Macron on Thursday promised aid to Lebanon but reassured angry citizens reeling from a lethal blast that killed 145 people that no blank cheques will be given to its leaders unless they enact reforms and end rife corruption.

Speaking at a news conference at the end of a dramatic visit to Beirut, Macron called for an international inquiry into the devastating explosion that generated a seismic shock felt across the region, saying it was an urgent signal to carry out anti-corruption reforms demanded by a furious population.

Dozens are still missing after Tuesday’s explosion at the port that injured 5,000 people and left up to 250,000 without habitable homes, hammering a nation already staggering from economic meltdown and a surge in coronavirus cases.

A security source said the death toll had reached 145, and officials said the figure was likely to rise.

Macron said he proposed to the Lebanese authorities a roadmap of urgent reforms to unlock billions of dollars in funds from the international community, and that he would return to Lebanon in September to follow up.

“If reforms are not carried out, Lebanon will continue to sink,” Macron said. “What is also needed here is political change. This explosion should be the start of a new era.”

He said France will organise an international aid conference for Lebanon, and he promised “transparent governance” so the aid goes to the people, NGOs and relief groups and not to the ruling elite which has been accused of corruption and mismanagement.

He told reporters that an audit was needed on the Lebanese central bank, among other urgent changes, and that the World Bank and United Nations would play a role in any Lebanese reforms. Talks with the IMF on a rescue package have stalled over the failure of the government to enact serious reforms.

During his visit Macron met all Lebanese political factions, including the powerful Iranian-backed Hezbollah group which dominates Lebanese politics. He urged Hezbollah to use its influence to press the government to carry out reforms and think of Lebanon’s interest rather that Iran’s.

Earlier, wearing a black tie in mourning, Macron toured the blast site and Beirut’s shattered streets where angry crowds demanded an end to a “regime” of Lebanese politicians they blame for dragging Lebanon into disaster.

“I guarantee you, this (reconstruction) aid will not go to corrupt hands,” Macron told the throngs who greeted him.

“I see the emotion on your face, the sadness, the pain. This is why I’m here,” he told one group, pledging to deliver “home truths” to Lebanon’s leaders.

At the French ambassador’s residence, where a French general declared the creation of the state of Lebanon exactly 100 years ago, Macron said it was no longer up to France to tell Lebanese leaders what to do, but that he could apply “pressure”. 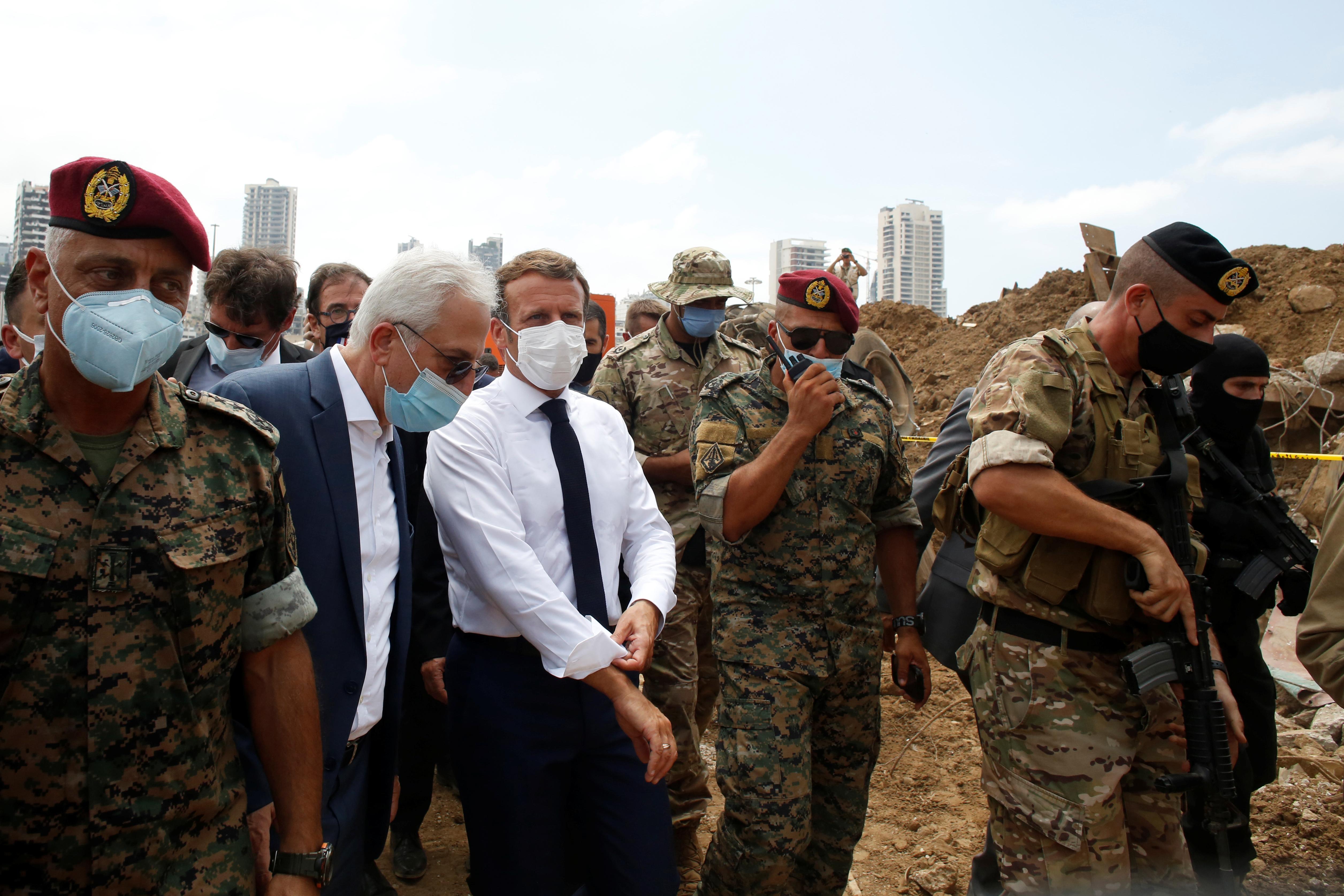 The government’s failure to tackle a runaway budget, mounting debt and endemic corruption has prompted Western donors to demand reform. Gulf Arab states who once helped have baulked at bailing out a nation they say is increasingly influenced by their rival Iran and Hezbollah.

At the port, destroyed by Tuesday’s giant mushroom cloud and fireball, families sought news of the missing, amid mounting anger at the authorities for allowing huge quantities of highly explosive ammonium nitrate, used in making fertilisers and bombs, to be stored there for years in unsafe conditions.

There was a small protest near an entrance to parliament in central Beirut with some demonstrators burning objects on the street, footage from local broadcasters showed.

The government has ordered some port officials be put under house arrest. State news agency NNA said 16 people have been taken into custody. The central bank said it had decided to freeze the accounts of the heads of Beirut port and Lebanese customs along with five others.

“They will scapegoat somebody to defer responsibility,” said Rabee Azar, a 33-year-old construction worker, speaking near the smashed remains of the port’s grain silo, surrounded by other mangled masonry and flattened buildings.

With banks in crisis, a collapsing currency and one of the world’s biggest debt burdens, Economy Minister Raoul Nehme said Lebanon had “very limited” resources to deal with the disaster, which by some estimates may have cost the nation up to $15 billion.

International offers of medical and other immediate aid have poured in, as officials have said hospitals, some heavily damaged in the blast, do not have enough beds and equipment.

Many Lebanese, who have lost jobs and watched savings evaporate in the financial crisis, say the blast is symptomatic of political cronyism and rampant graft among the ruling elite.

“Our leaders are crooks and liars. I don’t believe any investigation they will do,” said Jean Abi Hanna, 80, a retired port worker whose home was damaged and daughter and granddaughter injured in the blast.

An official source familiar with preliminary investigations blamed “inaction and negligence” for the blast.

People who felt the explosive force said they had witnessed nothing comparable in years of conflict and upheaval in Beirut, which was devastated by the 1975-1990 civil war and since then has experienced big bomb attacks, unrest and a war with Israel. 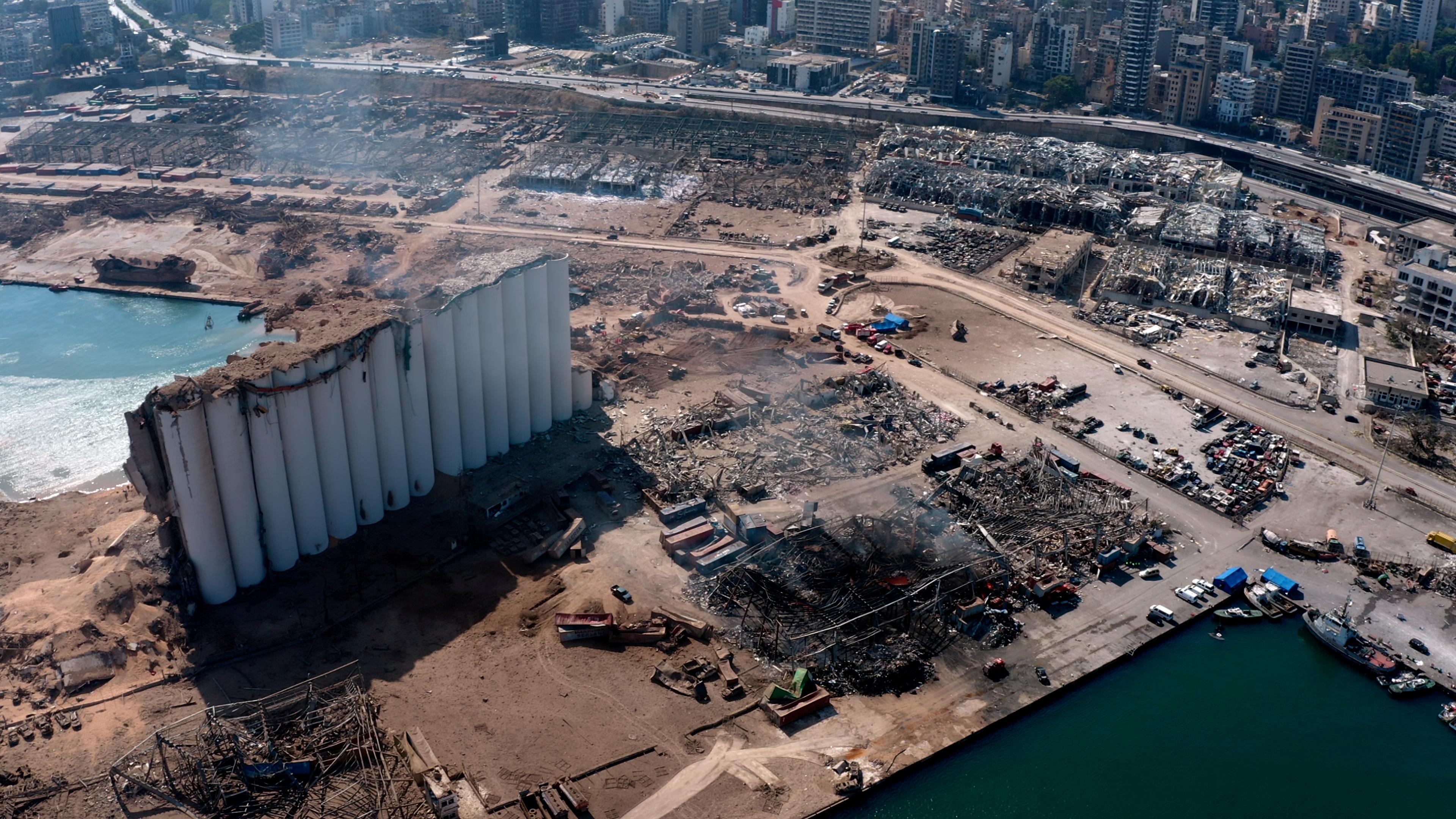 “All hell broke loose,” said Ibrahim Zoobi, who works near the port. “I saw people thrown five or six metres.”

Seismic tremors from the blast were recorded in Eilat on Israel’s Red Sea coast, about 580 km (360 miles) away.

Operations have been paralysed at Beirut port, Lebanon’s main route for imports needed to feed a nation of more than 6 million people, forcing ships to divert to smaller ports.