Stunning but not hard to pull off, these nine new pies from Genevieve Ko will be the highlight of your holiday. 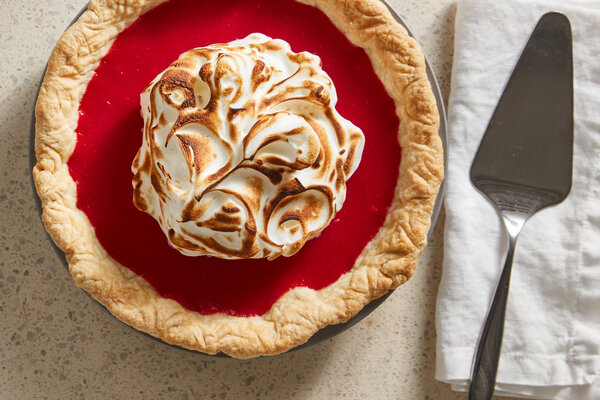 A burnished turkey may be the eminent Thanksgiving centerpiece, but everyone knows that the real star of the meal is pie. Be it pumpkin, apple, mango or whatever your folks used to make, a golden-crusted pie on the dessert table is a happy sight — even at the end of the most prodigious meal of the year. As my friend Karen says, “There’s always room for pie.”

Just to make sure you have loads of sweet options, Genevieve Ko has put together a truly breathtaking collection of nine new Thanksgiving pie recipes. Inspired by the cheerful nostalgia of classic diner offerings, her pies are playful and eye-catching but not hard to pull off.

On the fruitier side, there’s a caramel-apple pie with tart Granny Smith slices fanned out over a thick and chewy filling; a maple cream pie with blueberries that recalls the bliss of eating a stack of diner pancakes; a cranberry lemon meringue (above) that’s more deeply rosy than its citrus cousins; and an apple pie made even jammier by the addition of blackberries.

There are also creamy pies, some silky, some with crunch. You’ll find a chocolate peanut butter pie, like a candy bar in a crisp crust; a velvety eggnog sweet potato pie spiced with nutmeg; a pure custard pie that’s a riff on dan tat, miniature Cantonese egg tarts popular in dim sum restaurants; and a fluffy pumpkin cheesecake with a tumeric-ginger topping.

Finally, there’s also a pecan sandie pie that’s like a giant cookie in its shortbread-like crust. The only challenge here is choosing which one — or ones — to make. You can’t go wrong.

In the non-Thanksgiving department, other new recipes this week include a bright green take on aligot from Ham El-Waylly, who substitutes broccoli for the usual potatoes, and uses stretchy mozzarella for the cheese. Serve it as a statement-making side dish alongside seared pork chops or a simple roast chicken.

We’ve got even more broccoli for you, air-fried until caramelized, then seasoned with your favorite topping (sesame seeds, chile crisp, fish sauce, you’re the boss). The air fryer works wonderfully well for green beans, too, and Eleanore Park’s new recipe is tossed with garlic, chile flakes and balsamic vinegar. She’s got a smart tip for the preparation: If you have any garlic nubbins leftover after grating, throw them into the air fryer so they can “transform into tasty crisps, golden on the outside but still tender and soft inside,” she writes. Brilliant!

You can serve either the air-fried broccoli or the green beans with a homey cornbread tamale pie. Or, for something meatless, Kay Chun’s grilled tofu — garlicky, gingery soy-glazed slices that can also be made in a cast-iron pan on the stove.

Then for dessert, Yewande Komolafe updated recipe for an election cake. Similar to a yeasted coffee cake but baked in a Bundt pan, it’s gently spiced, full of dried fruit, drizzled with a lemony glaze, and apropos for tomorrow.

You do need a subscription to get the recipes. With the holiday season just around the corner, now is an excellent time to join us: For a limited time, you’ll get 50 percent off your first year. We’re also on TikTok, Instagram and YouTube, where you can watch Claire Saffitz make classic chocolate soufflés. That’s my kind of ASMR. If you’re having any technical problems with the site or your subscription, we are here for you at [email protected] And I’m at [email protected] if you want to drop me a note.

Now, Thanksgiving pie and diner pie are two iconic representations of American pie, but there is a third: the good ol’ pie-in-the-face. From silent movie splats to epic Technicolor donnybrooks and beyond, the pie fight is one of America’s great contributions to world cuisine (at least in its movie form).

Pie is a democratizing dessert — there’s always some swell who thinks they’re above the fray until brought low by a coconut cream. I recently learned that Stanley Kubrick filmed a pie fight as the ending of the film “Dr. Strangelove” though he later thought better of it. Still, it’s not on the menu for my Thanksgiving this year — too much cleanup.

I’ll see you on Wednesday, and Sam’s back on Friday with more Thanksgiving fun.