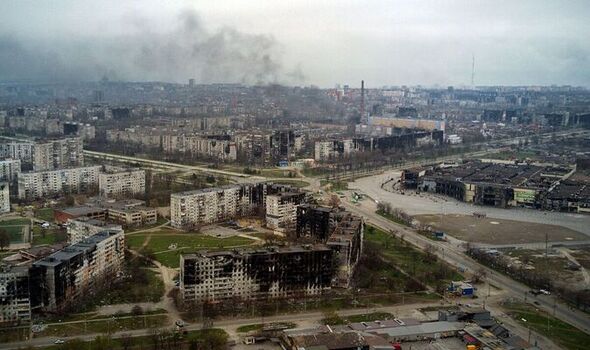 Moscow’s forces laid siege to the city for almost three months, pummelling it with artillery and creating a humanitarian catastrophe. Around 20,000 people are believed to have been killed and an estimated 100,000 people are without electricity, running water or gas in a city hollowed out by war.

Mariupol will go down in history as one of the most heavily bombed cities since World War Two.

He said: “We expect further progress in the southern direction.

“The military has already said the Russians will be expelled from our land approximately next spring. I believe in the Ukrainian Armed Forces, and I believe in my son, who serves and defends our country today.

“In two months, Russian troops inflicted more damage on Mariupol than German troops did in two years of occupation during World War Two.

Mr Boychenko met with the European Bank in Poland to discuss a fund for rebuilding the destroyed city.

He said: “There have already been examples in world history when cities were reborn from the ashes of war. For example, Warsaw, Gdansk, Rotterdam, and Dresden.

“With support from partners like the EBRD, the World Bank and USAID there is no doubt that Mariupol will revive and will not only return to greatness but will become even stronger.”

Like many in the Ukrainian government, Mr Boychenko does not want to negotiate with Russia – with one of President Zelensky’s closest advisers also declaring peace talks would be akin to capitulation.

The Mayor of Mariupol said: “It is out of the question.

“We do not conduct any dialogue with the terrorists who destroyed our city and killed tens of thousands of Mariupol residents. Russian occupiers are a terrible but temporary phenomenon.”

The head of the UN nuclear watchdog, Rafael Grossi, made an urgent appeal for shelling to stop near Europe’s biggest nuclear power plant.

More than a dozen powerful explosions have been recorded near a huge Russian-occupied nuclear power plant in south Ukraine since Saturday evening.

“Whoever is behind this, it must stop immediately,” he said. “You’re playing with fire!”

The plant stands on the River Dnipro, on the front line in the war.

Ukraine’s nuclear energy firm has accused the Russian military of once again “putting the whole world at risk” by firing 12 shells at the Zaporizhia power plant.

A key adviser to the Ukrainian presidency said the West is pressuring Ukraine to negotiate with Moscow, a move that amounts to capitulation.

“When you have the initiative on the battlefield, it’s slightly bizarre to receive proposals like: ‘You will not be able to do everything by military means anyway, you need to negotiate’,” Mykhaylo Podolyak told AFP.

This would mean that the country “that recovers its territories, must capitulate to the country that is losing”, he added.

Russia had not made “any direct proposal” to Kyiv for peace talks and was likely to use negotiations to “simply stall for time”, he said.