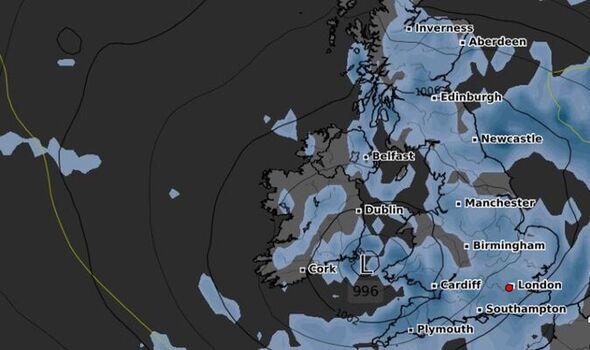 There are yellow warnings of rain in place affecting Strathclyde, Galloway, Lothian & Borders, and Central, Tayside & Fife, running from 4am until 10am on Sunday. This will impact a number of regions throughout Scotland, including the southwest of the country, as well as Dundee, Falkirk, Edinburgh and South Lanarkshire. The latest warnings state there will be “heavy rain bringing a chance of some flooding and disruption”.

In addition, the Met Office said: “Outbreaks of rain, heavy at times, are possible early on Thursday morning. Accumulations of 20-30mm are likely in a few hours with a chance of up to 40mm in one or two places.

“Following recent wet weather, this brings a risk of flooding and possible disruption to transport.

“The rain is expected to turn more showery later in the morning.”

The Met Office’s forecast for today states there will be a mixture of sunny spells and showers, but some will be “heavy with a risk of thunder”.

Although showers will ease inland for many throughout the UK this evening, “further showery bands running north across the southern Britain and northern Scotland”.

For Thursday, the Met Office has forecast: “Further showers and thunderstorms in south, mainly dry with variable cloud elsewhere with an increasing risk of heavy rain across northeast England and eastern Scotland later.”