For much of the UK the weather has been rather wet and windy so far this week, which is being attributed to a deep area of low pressure crossing over the UK. In some places winds have reached speeds of more than 50mph. But the Met Office has said this week is likely to be a “week of two seasons”, with much warmer weather expected to make an arrival very soon.

The Met Office are forecasting a scorching Friday for much of the UK this week, with warm weather expected to first appear on Thursday for much of England and Wales.

According to the Met Office’s latest forecast, some parts of south-east England could see roasting highs of up to 33C on Friday.

Parts of the Midlands and northern England could also see temperatures peaking at 30C.

Elsewhere, parts of southern Scotland are also expected to see maximum temperatures within the range of the high 20C’s. 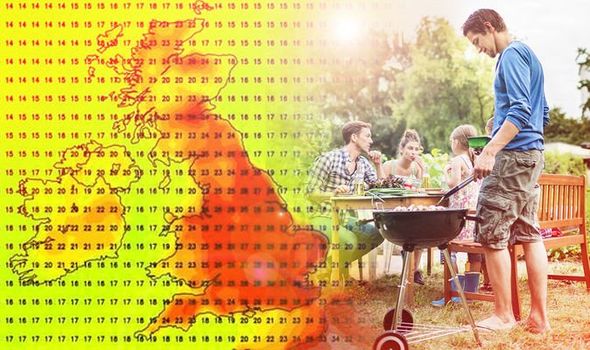 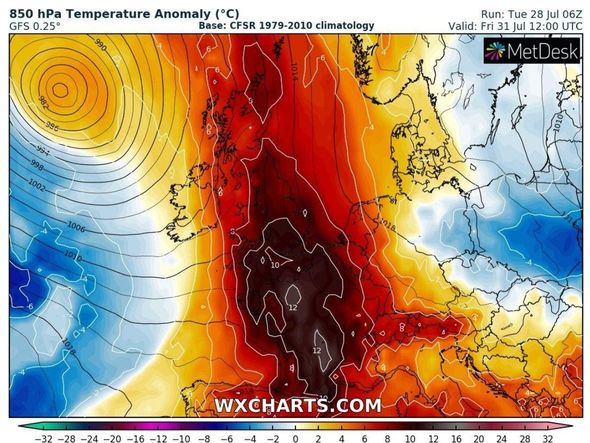 Netweather maps show the heat will be widespread on Friday, with much of the UK labelled as red – indicating temperatures above 25C.

The maps show around 3pm on Friday, pockets of the south-east are expected to see maximum temperatures between 30 to 31C.

Most of southern England and the south-west are expected to see highs above 25C at this time.

Wales is also likely to see maximum temperatures vary between 23C to 27C. 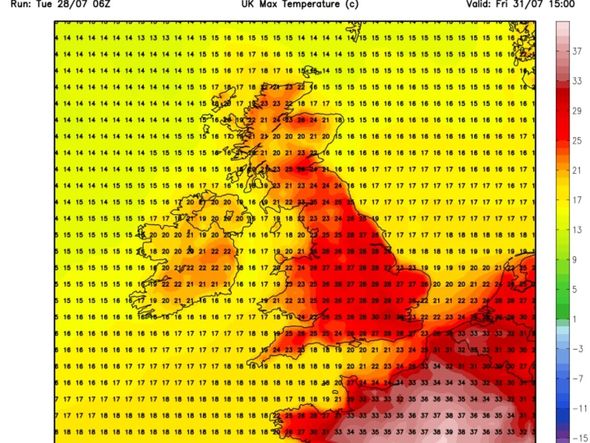 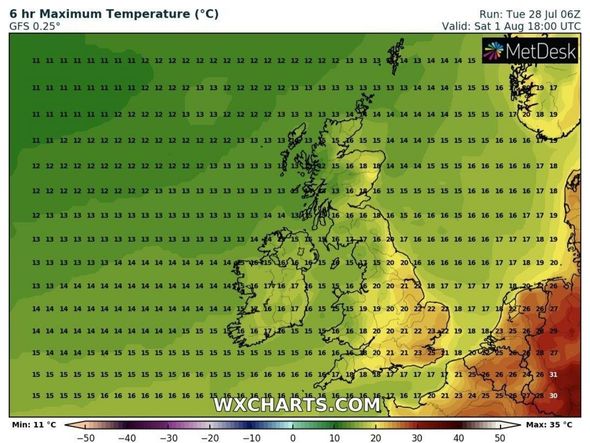 Scotland looks likely to be slightly cooler than England and Wales, but temperatures are still likely to be very warm, with the mercury forecast to rise to as high as 26C.

Northern Ireland is likely to see maximum temperatures between 19 and 21C on Friday.

During this time maps show much of Europe will witness even hotter temperatures than the UK, with some parts of France expected to see roasting highs of 40C.

Although much of the UK can expect to see some warmer weather later this week, the heat won’t last long enough to be classed as a heatwave.

Met Office Deputy Chief Forecaster, Brent Walker, explained: “There is quite a change in the weather coming by the end of the week, with increasing sunshine and a day of hot conditions on Friday.

“It won’t persist long enough to become a heatwave as a cold front moves in on Saturday, bringing the temperatures back down to around average for the time of year.”

While Saturday is expected to be a cooler day than Friday, weather maps suggest it could still prove to be a warm day for many. 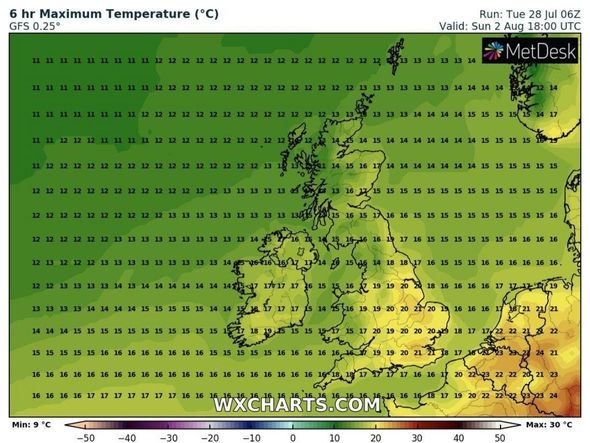 Much of central, eastern and southern England is forecast to see maximum temperatures above 20C, according to WXCHARTS maps.

Northern Ireland, Scotland and Wales are not forecast to be quite as warm on Saturday.

However temperatures around the range of the high teen’s could make an appearance.

WXCHARTS maps show Sunday is likely to be slightly cooler compared to Saturday, with only some parts of southern and eastern England expected to see temperatures above 20C.