Weather warnings are in place across the country today for rain, and additional warnings have been issued for later this week. 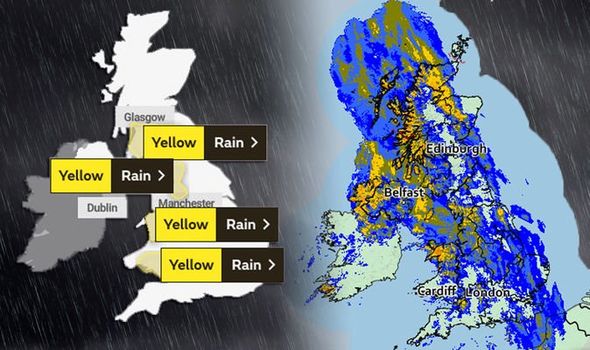 A Met Office yellow rain warning, which affects regions in south and northwest Wales, is in place from 3pm on Wednesday until 2pm on Thursday.

The warning was also extended this week to include parts of northwest England, including Blackpool and Lancaster.

The warning reads: “An Atlantic weather system arriving on Wednesday is expected to bring a further spell of rainfall which is likely to become heavy and prolonged over areas of high ground in parts of Northwest England.

“Rainfall totals of between 70 and 100 mm are possible during the period.

“Given the saturated nature of the ground this may lead to some flooding.”

Another yellow rain warning has been issued for a large stretch of Scotland, including Dumfries, Wigtown and Peebles, from 2pm today until 11am tomorrow.

The Met Office warn rain “is expected to become persistent”, with accumulations of 30 to 40mm expected over high ground.

The meteorological agency added: “Combined with existing saturated ground this may lead to some local flooding.”

The UK has faced widespread travel disruption and flooding as a result of two named storms in the last two weeks – Storm Ciara and Storm Dennis.

The Met Office are forecasting “more wind and rain”, as “unsettled” weather patterns are predicted to continue.

“Although the forecast for the next few days indicates that conditions won’t be as severe, any additional rainfall could create further challenges as river catchments are more likely to respond to extra rainfall more quickly.

The number of flood warnings and alerts issued by the Environment Agency has dropped since the weekend, but water levels continue to be high in many areas.

Almost 300 flood warnings and alerts are currently in place, with six severe ‘danger to life warnings’ also in place for the following regions:

A number of regions, including Wales, have been worst-hit by the floods in the past few days.

Scott Squires, Duty Tactical Manager for Natural Resources Wales said: “As the flood waters recede and communities start to get back on their feet, we’ll continue to support local authorities and emergency service in these affected areas.

“Over the coming days our teams will be checking for any signs of damage to our flood defences, and removing blockages and debris which has built up in culverts and drainage grids etc.

“If you’ve been affected you can find advice on what you need to do by visiting our website or calling Floodline on 0345 988 1188. You can also visit our website for the latest flood warnings, updated every 15 minutes.”