Snow is falling across the UK this Sunday as chilling conditions bring flurries of up to four inches in parts. Many of us woke up to a crisp, white layer on the ground, while others across Britain have enjoyed watching the snow fall this morning. The Met Office is now warning the UK will see two days of snow and ice as it issued a flurry of warnings.

A snow warning has been issued for a vast swathe of England, which is in place from 3am to 11.59pm after having been extended today to include some more northern and eastern areas.

The alert reads: “An area of snow will move across Wales and central and southern England today, becoming slow-moving for a time across parts of the Midlands.

“This will bring 1-3 cm of snow across much of the warning area, though not all sites will see lying snow and northern parts of East Anglia may see little snow.

“Areas above 100 m are likely to be worst affected and here 5-10 cm of snow is possible, particularly for parts of the Midlands.” 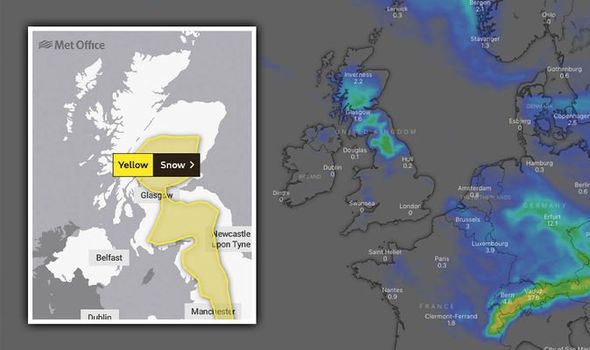 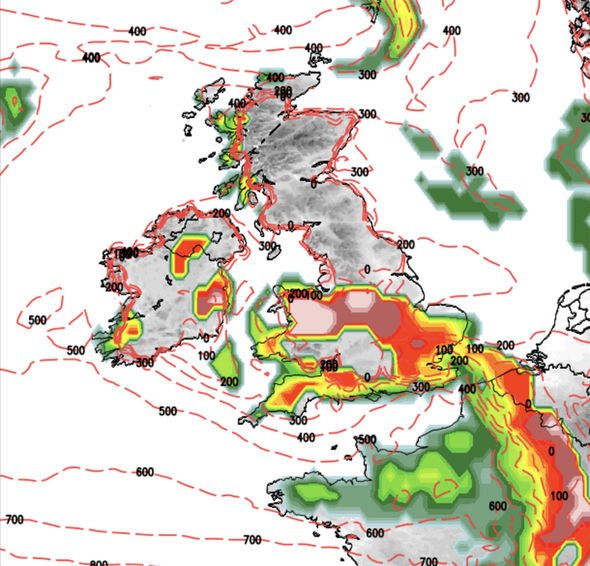 A further warning fo a similar area has now also been issued for Monday for ice, which says: “Icy patches are expected overnight onwards into Monday morning, especially where snow has fallen on Sunday.”

While in Scotland, a snow and ice warning is in place from 4pm today to 11am on Monday, which reads: “Wintry showers across western Scotland and the Northern Isles will turn increasingly to rain at low levels during the early hours of Monday allowing icy patches to form.

“On hills and mountains, showers will remain as snow. A few centimetres of snow are possible on hills above 200 metres, and perhaps over the Shetland mainland for a time this evening.

“Northern Grampian will be dry for most of the night but a few showers are likely here late in the night.” 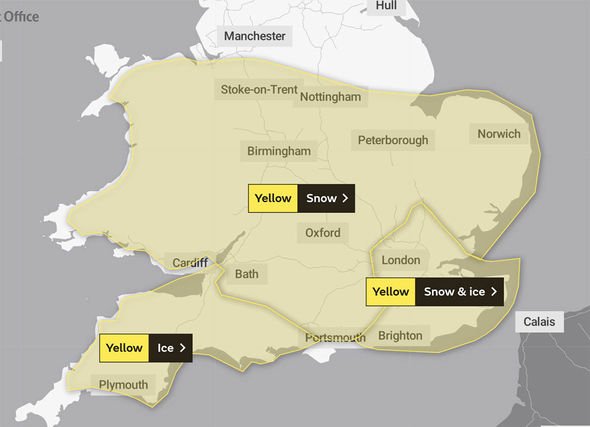 In the south east of the country, a snow and ice warning remains in place as an area or rain and snow will linger over the capital and it’s surrounding areas on Sunday.

The band of rain and snow will lead to icy conditions, and the national forecaster warns of the potential for trips and falls, along with travel disruption.

The alert says: “An area of rain, sleet and snow will move into southeast England from the west on Sunday morning, lingering here for much of the day before gradually clearing Sunday night.

“1-3 cm of snow is possible in places, mainly above 100 m, with icy stretches forming as this arrives – some persisting during the day or reforming as the precipitation clears during the evening”

And in the south west, a warning for ice is active until 11.59pm tonight. The alert was initially a snow and ice warning but has now been focussed on just ice.

The alert reads: “Further icy patches are expected, particularly over high routes and more so this evening. In addition further wintry showers are expected, especially over higher ground such as Dartmoor and Exmoor where small and patchy accumulations of snow are possible in a few places.” 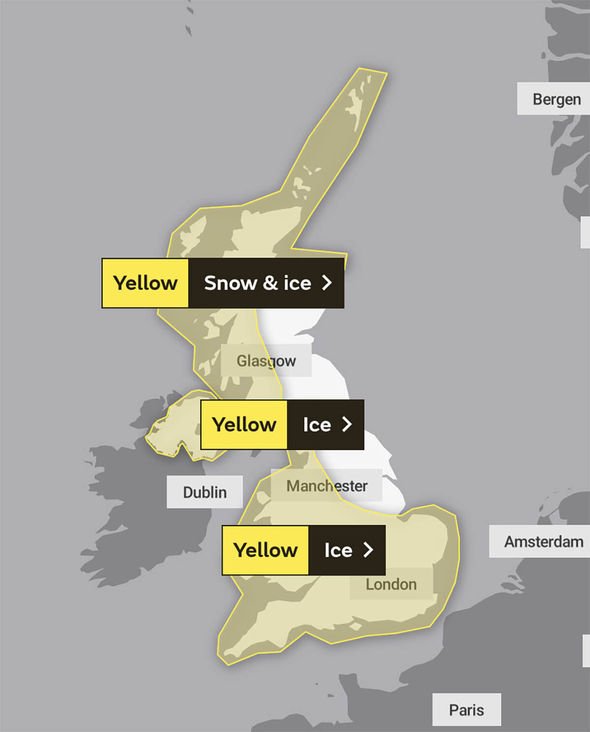 Unfortunately, the north of England will miss out on the snow, though this may be a relief for many as the region has been battling flooding and wintry conditions for weeks.

However, heavy rain will continue to blight the area, along with plummeting temperatures.

Chris Tubbs, deputy chief forecaster for the Met Office said: “The cold conditions are forecast to remain across the UK until Tuesday, when more Atlantic-dominated weather is due to exert an influence, gradually bringing milder, but wetter conditions to the UK once more, although this may take a while to reach the north-east of the UK.

“Once the certainty increases about which areas are most likely to be affected by potentially heavy rain, we may need to issue further warnings, especially if next week’s rainfall is likely to compound the impacts from this week.”