The Met Office has placed another weather warning for rain over the country this week, as a deluge continues off the back of the devastating Storm Dennis. The latest warning advises people to expect further heavy rain before this weekend.

UK weather forecasters have laid down another warning for rain this weekend, continuing nearly a full week of adverse weather predicted by the Met Office.

Currently, warnings are in place from Tuesday to Saturday, February 22 in the Midlands and southwest England.

The latest adds there is a risk for people living in northern England.

In a Tweet, the Met Office said heavy rain will fall across northern England from 12am on Friday to 6am on Saturday. 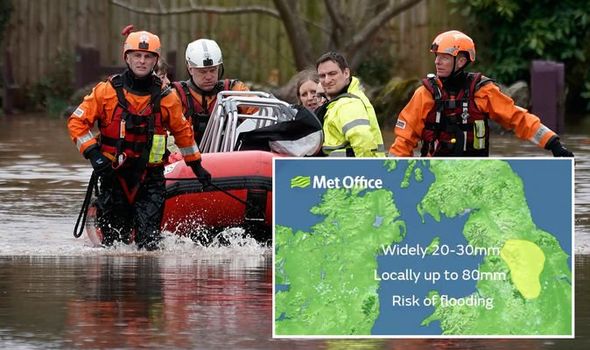 They estimate widespread totals of 20 to 30mm on the day, with maximums of 80mm possible locally.

The Met Office added there was a risk for flooding over the affected area.

The full warning reads: “Further rain is expected across northern England on Friday.

“Rain is expected to turn persistent and occasionally heavy over parts of the Pennines before clearing early on Saturday.”

“Given the recent wet conditions this brings a chance of flooding.”

Other rain warnings remain in place for Wales, which is currently struggling under rising floodwaters due to Storm Dennis.

The system brought chaos to the west coast, leaving tens of thousands of people without power and damaging hundreds of properties.

Currently, the Environment Agency remains on high alert for potential flooding, and it has placed more than 200 notices over the UK.

They have 186 active flood alerts, 148 warnings and six severe flood warnings for the country.

The six weather warnings are for Wales, as rivers in the region threaten to burst their banks.

People in some places risk a “danger to life” as rain continues to fall.

The Environment Agency has urged people to evacuate the following areas where possible:

– River Severn at the Wharfage, Ironbridge