Met Office forecaster Craig Snell told Express.co.uk the hot weather is likely to continue over the next four days at least.

But alongside the hot weather, there is also a risk of thunderstorms across the UK.

Mr Snell said: “Each day is going to be pretty similar. It’s going to be a fairly hot few days for a lot of the country and we are going to be seeing the risk of severe thunderstorms developing at times too.

“There are yellow warnings out in force for thunderstorms on Monday, Tuesday, Wednesday and Thursday. 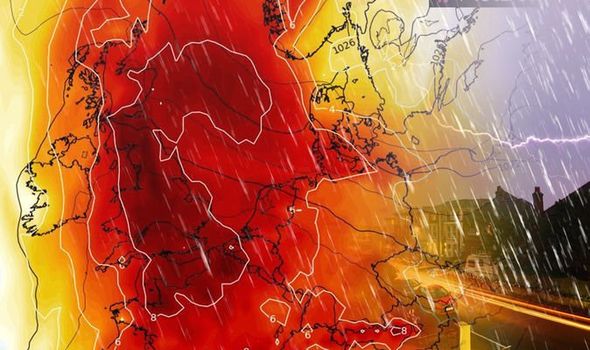 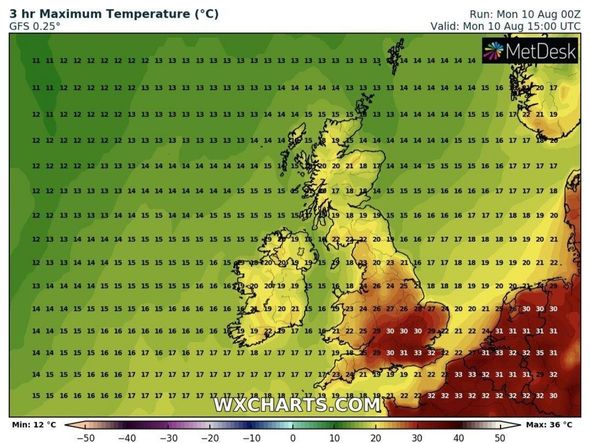 “At the moment we’re not too sure the areas which are going to be most affected each day.

“What we can probably say for today is western areas will probably be most prone.

“We’ve got some thunderstorms already developing across the south west and these will transfer their way across Wales and into northwestern England, Northern Ireland and eventually into Scotland later this afternoon.

“We could potentially see some torrential rain, large hail and frequent lightning during these thunderstorms, so you certainly will know about them when they do come across you. 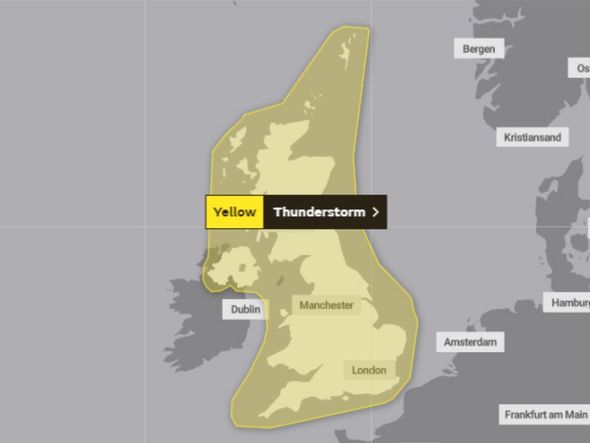 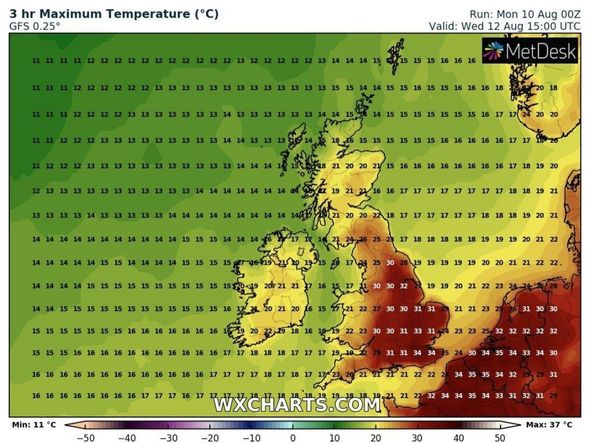 “Further east there will be a few thunderstorms around.”

On Monday the highest temperatures are expected in the south-east, with 36 to 37C likely, while elsewhere Scotland and Northern Ireland could see temperatures in the range of the low 20s.

For the rest of England and Wales, the temperatures will vary between the mid 20s to low 30s on Monday.

Tuesday is also expected to bring maximum temperatures of 36 to 37C, with thunderstorms also possible.

Temperatures could also reach 36 to 37C on Wednesday, and overall the start of this week is expected to be warm in the north and very hot in the south.

The hot weather is expected to last for at least the next four days, turning slightly cooler towards the end of the week.

However, it will still be fairly warm, with temperatures in the mid 20s possible in the south and low 20s in the north later on.

As the UK is under a thunderstorm warning, the Met Office warns the storms could be severe with the risk of localised flooding in some cases. 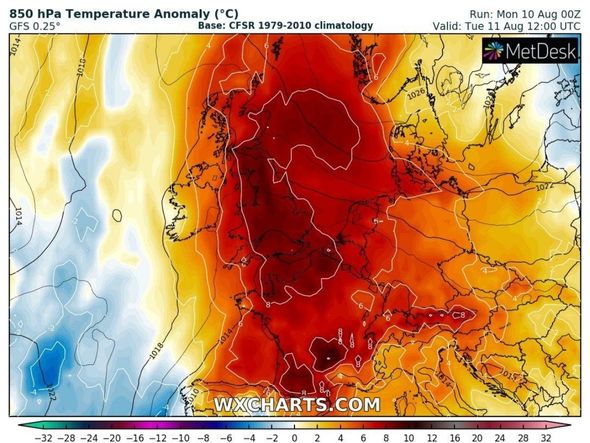 Excluding the northernmost regions, most of the UK is under a yellow warning on Monday.

The entirety of the UK is under warning for Tuesday and Wednesday, and on Thursday the warning covers most of England and Wales.

The Met Office thunderstorm warning for Monday reads: “Areas of thunderstorms are increasingly likely to develop over the south of the UK or nearby continent late on Sunday and will generally track north or north-westwards, potentially affecting all parts of the UK at some points during this period.

“Whilst the most intense thunderstorms, in some instances associated with large hail, will most probably be those triggered by the high temperatures of the day over England and Wales, other areas of storms producing heavy rainfall, frequent lightning and strong gusty winds could reach further north at times over Scotland and Northern Ireland.

“These could occur at any time of the day. Where the storms occur, rainfall totals of 30 to 40 mm could fall in an hour, with some locations potentially receiving 60 to 80 mm in three hours, although these will be fairly isolated.”