The Met Office has extended its warnings for the UK today, as a weather system threatens to batter the country with low temperatures, snow, ice and hail. The service warned people risk injury as wintry showers impact the UK until the mid-morning.

The Met Office has released another weather warnings for snow over the south of the country, with up to 5cm possible in Wales.

The warning reads: “Rain and hill snow will move eastwards late Wednesday evening and during the early hours of Thursday.

“Snow is expected over hills and mountains in Wales and also over the Cotswolds and Chilterns.

“In southern Wales 2-5 cm of snow is likely, mainly above 200 metres, whilst 1-3 cm snow is likely over the Cotswolds, Chilterns, and parts of the Midlands above 150 metres.

“Away from hills, rain may turn to sleet and snow for a time over parts of the Midlands, East Anglia and the northern Home Counties.

“Accumulations at these low-levels will be mostly small, especially on roads, but a centimetre or so is possible in one or two places.

“Rain, sleet and snow will quickly clear southeastwards by late morning and any snow at lower levels will soon thaw.”

Two weather warnings are in place for the UK this morning, covering almost all of the country.

The largest is a snow and ice warning which looms over 14 regions until 10am today.

There, people can expect an array of conditions, including snow, hail and ice as “wintry showers” bear down. 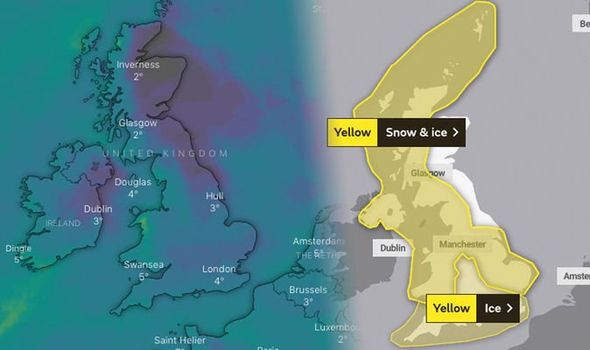 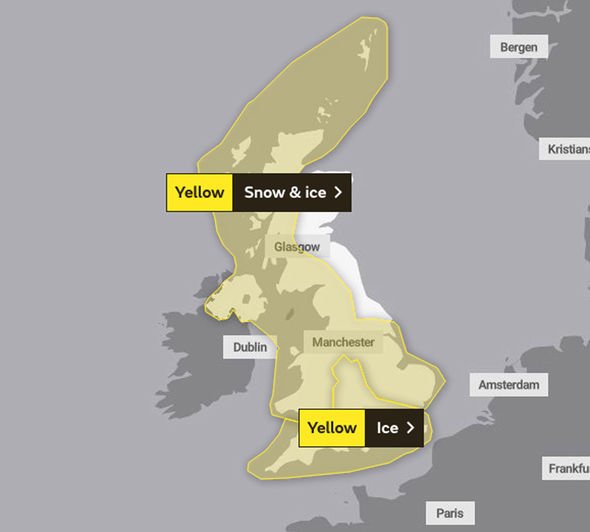 “These showers will fall as a mixture of rain, hail and snow at times, the snow mostly over higher ground.

“Some places are likely to see 1 to 3 cm of snow, mainly above 200 m, with 4 to 8 cm possible over the higher ground in northwest England, Wales and west Scotland.”

Another, smaller warning, is in place for seven regions in the south, including London.

There, forecasters expect a “mix of rain and hail showers” which could freeze surfaces overnight, potentially causing injury. 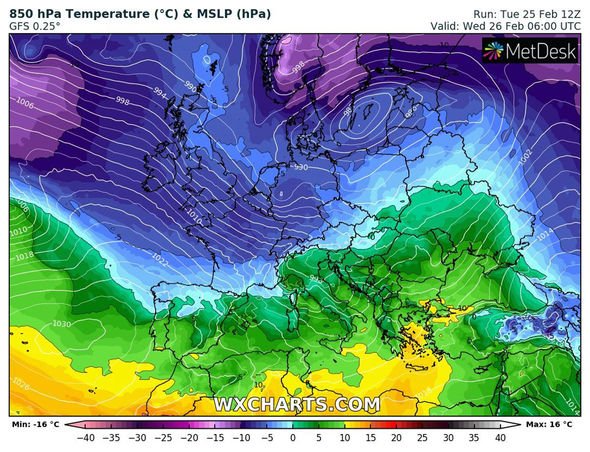 The warning adds: “Surface temperatures are then expected to fall below freezing with icy stretches forming in places.”

Temperature maps revealed much of the UK struggled under the low single and minus figures this morning, with several parts of Scotland under -1C by 6am.

Several parts of the country will also have to cope with flooding this morning, as the Environment Agency has released hundreds of alerts for the UK.

As of 8am, the agency has issued a total of 146 flood “alerts” for the scattered locations in England, many of which are on the west coast. 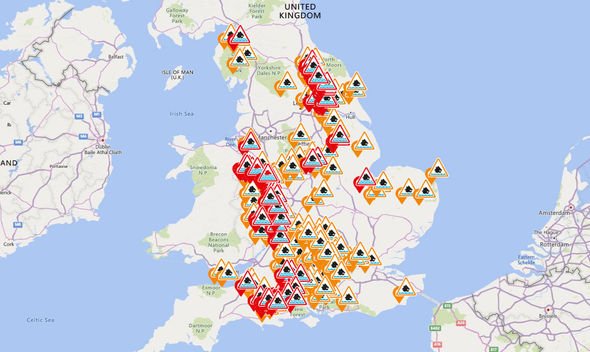 They have also released flood “warnings”, as imminent flooding affects a further 102 regions.

Of the 250 total notices today, two are for “severe” flooding, which could pose a threat to life today.

Both warnings are in place for the River Severn, which has recently surged thanks to Storms Dennis and Ciara.

Ironbridge and Shrewsbury are both at risk of dangerous flooding as the river continues to rise.

The Environment Agency said they are “closely monitoring the situation”, and issued advice for people living in the affected areas.

They said: “Our incident response staff are liaising with emergency services regarding the temporary flood barriers at Ironbridge.