The Met Office has extended its weather warnings today to cover a raft of England, as well as parts of Scotland and Northern Ireland. Britain has been baked this week by a searing heatwave – but a low pressure system has now sept in, bringing heavy rain and thunderstorms in exchange for the blister temperatures.

The Met Office said: “Although thunderstorms are less likely today, heavy showers and more prolonged rain will continue at times, still with the possibility of thunder.

“These may bring 10 to 20mm per hour for some places during Saturday, with perhaps 30 to 40mm over a few hours.

“The ground is getting wetter now, so this may cause a few issues.”

The warning area has been extended to include parts of the North Midlands and Northern England – and now another batch of fresh warnings have been issued for swathes of the UK. 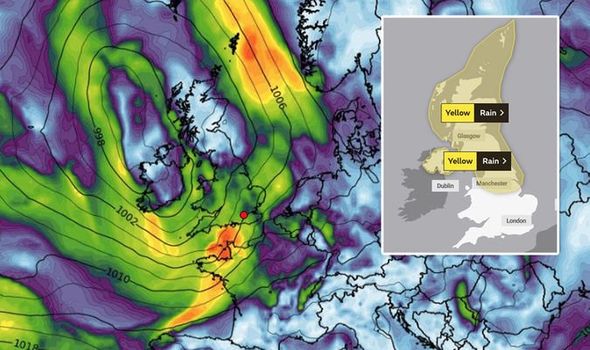 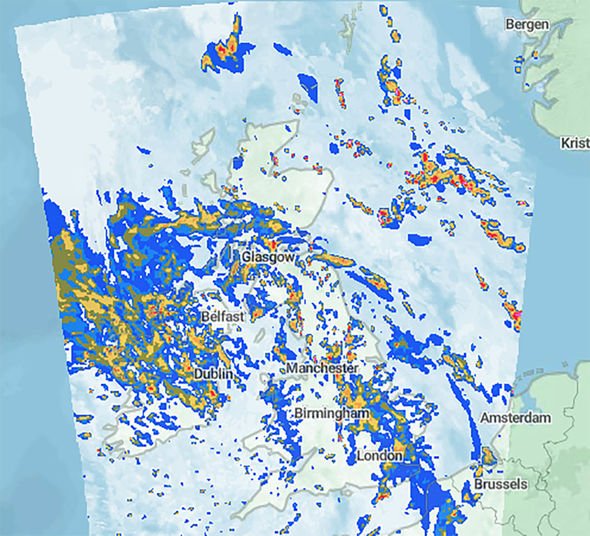 The warnings reads: “Rain or showers are expected through much of Sunday and Monday, and will merge into periods of heavy and persistent rain over high ground.

“Forty to 50mm of rain is likely to fall quite widely, and a few places may see 90 to 120 mm during this period.

“The largest totals are most likely across higher parts of Cumbria and Lancashire. The heavier rain should ease away from Scotland and Northern Ireland on Monday morning and from remaining areas on Monday afternoon.

“Strong winds will be an additional hazard across Northern Ireland, northwest England and southwest Scotland, with gusts of 50 mph in exposed places.”

The weather agency warned bus and train services could be affected, with longer journey times possible as spray and flooding on roads will make travel times longer. 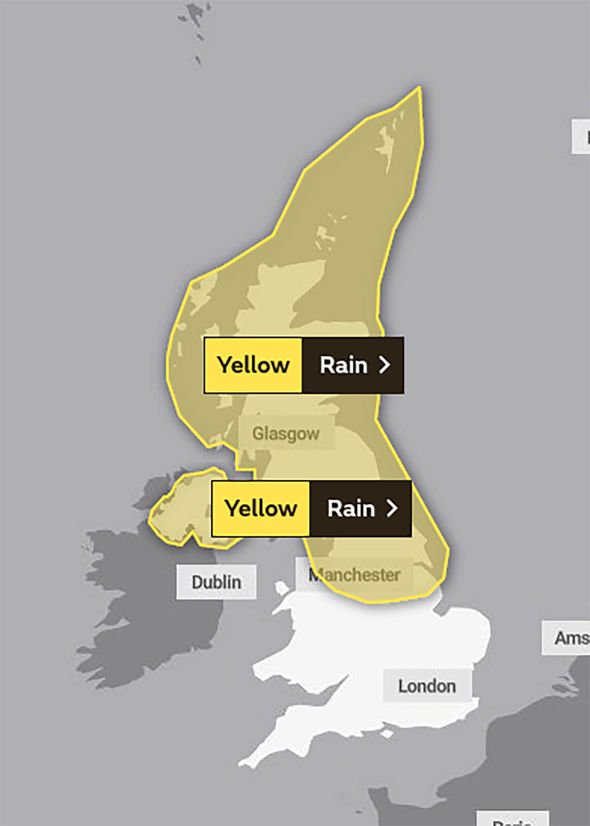 Flooding of a few homes and businesses is possible, the Met Office added.

The yellow weather warning is in place from 9am today until 10pm this evening.

You can find all the regions affected by the alert at the bottom of this story.

Two flood alerts are currently in place at Loughborough Urban Watercourses and the River Trent Tributaries in Nottinghamshire.

Five alerts have been discontinued. 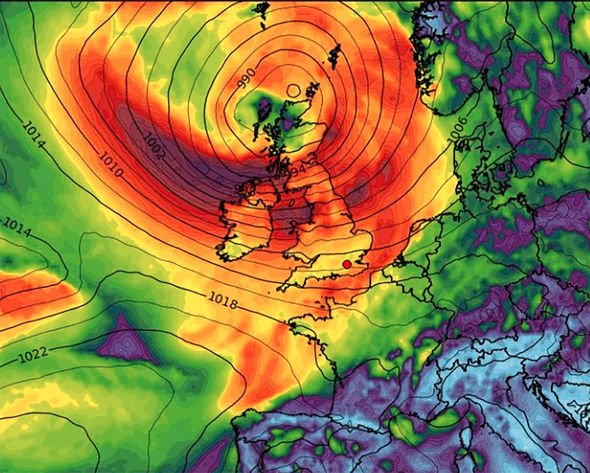 The Met Office forecast for this weekend reads: “A little sunshine, but showers will affect many areas, heaviest and most prolonged in the north, with the odd thunderstorm. Light winds here but windy further south. Cooler for all.

“Tonight: Rather cloudy for many with further showers, these most frequent in north and west, and merging into longer spells of rain for Northern Ireland and western Scotland.”

On Sunday, the Met Ofice said: “Heavy and persistent rain in parts of northwestern Britain. Sunny spells and scattered, blustery showers in the south.

“Windy for many with coastal gales in north. Much cooler again.”

The warnings come after the UK saw hottest day of the year so far on Wednesday, June 24, when temperatures climbed to 32.6C at Heathrow.

But with an area of low pressure now sweeping in, the UK is seeing much cooler temperatures with many waking up to a chilly 13C this morning – a drop of some 10C.

“It’ll be breezy for all this weekend with heavy showers and longer spells of rain for most, though Sunday could brighten up across the southern half of the UK.”