US secretary of state Mike Pompeo has urged nations around the world to push back against the Chinese Communist Party (CCP) following talks with the UK’s foreign secretary.

Mr Pompeo blamed China’s ruling party specifically for COVID-19 becoming a pandemic, saying it was “preventable” and its “exploitation of this disaster to further its own interests has been disgraceful”.

“Rather than helping the world, General Secretary Xi [Jinping] has shown the party’s two faces,” he told a joint news conference with Dominic Raab in London.

Donald Trump’s top diplomat added that the CCP had “crushed” Hong Kong’s freedoms and bullied China’s neighbours with regards to claiming islands in the South China Sea and the disputed land on the Chinese-Indian border.

He congratulated the UK government for deciding to remove Huawei equipment from Britain’s 5G networks and said it has “generously opened its doors” to Hong Kongers, halted the extradition treaty with Hong Kong and introduced an arms embargo on weapons that could be used against protesters.

“We support those sovereign choices, we think well done,” he added.

Mr Pompeo praised the relationship between the US and the UK but said every country needs to be wary of China.

“We think the entire world needs to work together to ensure every country, including China, behaves in the international system in ways that are appropriate and consistent with the international order,” he said.

“We want every country to work together to push back against the Chinese Communist Party’s efforts in every dimension I described.

“We hope we can build a coalition to collectively show the CCP it’s not in their best interests to engage in this kind of behaviour.” He also highlighted the CCP directing state-owned firms to “steal” intellectual property from US firms.

Mr Raab said he and Mr Pompeo had discussed their “serious concerns” about the situation in Hong Kong and that they talked about raising the issue of China’s actions at “G7 level”. 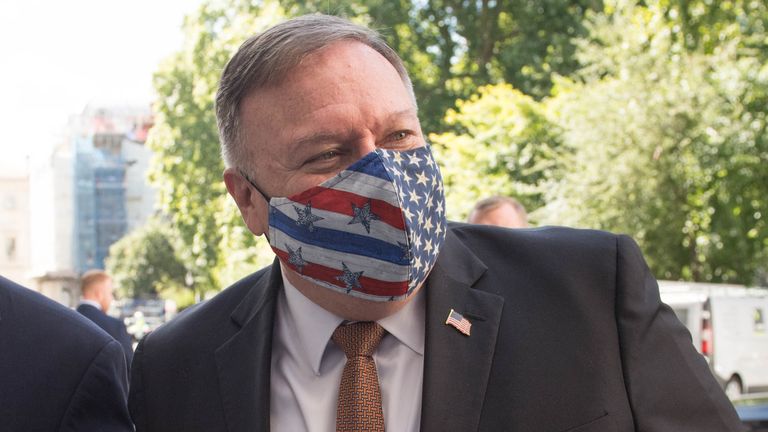 He said there was “no question of strong-arming” over the decision to ban Huawei but said after the US imposed sanctions on China, blocking the use of American-made chips, the UK had to “look for a clear-sighted perspective”.

The foreign secretary added that he spoke to Mr Pompeo about how the UK and US can diversify telecoms and other infrastructure, which has been shown necessary by the amount of PPE needed during the coronavirus pandemic. 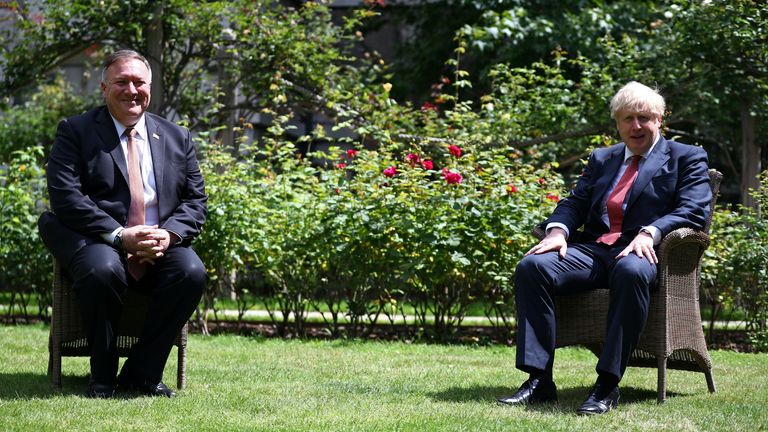 Mr Raab appeared positive about a free trade deal being agreed with the US, saying the current annual £3bn in turnover between British and US businesses can increase.

Mr Pompeo said a deal is a “primary focus” and hopes to finalise it “before too long”.

Boris Johnson earlier met Mr Pompeo in the Cabinet room before they moved to the Downing Street garden where they remained two metres apart due to social distancing.