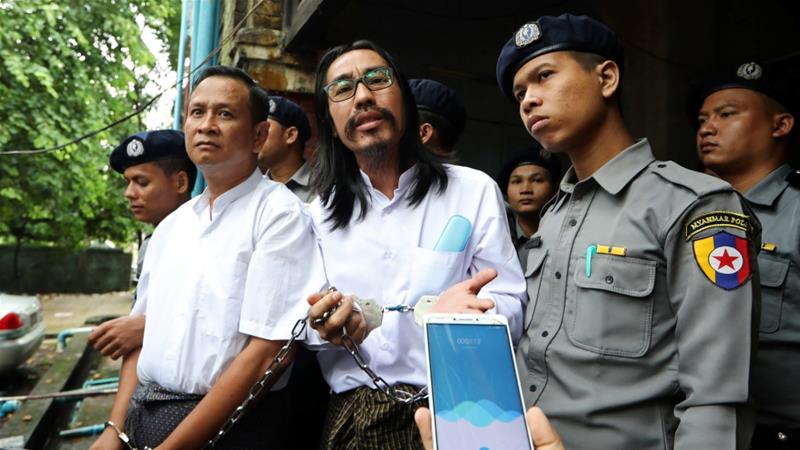 Yangon, Myanmar – Prosecutors in Myanmar have urged a court to give the death sentence to three men accused of plotting to assassinate a prominent Muslim lawyer and adviser to the country’s leader, Aung San Suu Kyi.

Ko Ni, who had pushed for reforms aimed at challenging the military’s grip on power, was shot in the head at point-blank range in broad daylight two years ago at the Yangon airport as he held his young grandson.

The gunman was led into a courtroom on Friday at Yangon’s Insein court, handcuffed and chained to two of his co-defendants before their lawyers presented the final arguments.

“They must get the death sentence,” prosecution lawyer Nay La told Al Jazeera after the hearing. Ko Ni was gunned down “in a public place, and they made sure to shoot him through the head,” he added.

Although the death penalty is still on the books in Myanmar, the country has not conducted an execution in several decades.

The defence has argued that Kyi Lin, who was captured on CCTV aiming a 9mm pistol at the back of Ko Ni’s head and pulling the trigger, carried out the killing because he had been threatened.

He tried to flee the scene of the shooting but was pursued by a group of taxi drivers and shot one of them dead in the ensuing melee. His lawyer argued that he did not mean to kill the driver and urged the judge to sentence him more leniently.

The defence also argued that co-defendants Zeyar Phyo, a former military intelligence captain, and Aung Win Zaw, a former lieutenant, should be acquitted.

Zeyar Phyo, who is accused of bankrolling the assassination plot with roughly $80,000, did not appear on the CCTV footage and was not involved in any conspiracy, his lawyer told the court.

He said a lawyer had previously disputed that video footage showed the third defendant, Aung Zaw Win, at the airport on the day of the shooting. “But today, the lawyer admitted the CCTV records were true,” he added.

The man accused of masterminding the killing, a former lieutenant colonel named Aung Win Khine, is still at large. He was also captured on CCTV at the airport.

“Until Aung Win Khine is apprehended and questioned, there will always be doubts that justice was really done in this case,” said David Mathieson, an independent analyst based in Myanmar.

For many, the killing shattered Myanmar’s hopes of genuine reforms following decades of military rule.

Ko Ni had been working on plans to replace the country’s military-drafted constitution, which gives the generals control over key sections of the government even after an historic 2015 election that brought Aung San Suu Kyi, a former dissident, to power.

Ko Ni is also credited with creating the position of State Counsellor, the title held by Aung San Suu Kyi that allowed her to become Myanmar’s de facto leader in spite of a clause in the constitution that prevents her from becoming president.

While there is no evidence that military officers were involved in the killings, many see Ko Ni’s death as a sign of the danger involved in challenging the military’s hold on power in Myanmar.

Both men “sacrificed their lives to help fight the challenges to promoting the rule of law and justice in Myanmar,” she said.

Some are unnerved by the prosecution’s call for capital punishment in a case that has become symbolic of the country’s struggle for peace and freedom.

“The death penalty flies in the face of human rights and rule of law principles,” Sean Bain, a Myanmar-based legal adviser with the International Commission of Jurists, told Al Jazeera.

“Prosecutors should seek a just penalty that deters repetition while respecting human rights,” he added.

The final ruling is expected on February 15.