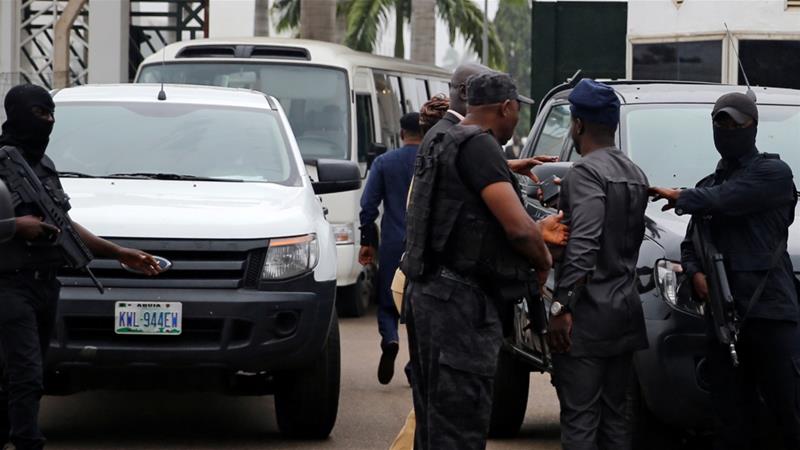 Unidentified armed men have taken away a Nigerian journalist in the southern Bayelsa state, according to witnesses and watchdog groups, just months after his release from a two-year stint in state custody.

Jones Abiri, editor and publisher of the Weekly Source newspaper, was accosted by armed men as he was meeting six colleagues at the Bayelsa Federated Newspaper Publishers Association on Saturday, witnesses said.

“Two DSS vehicles … stormed the office” of the publishers’ association in Yenagoa, the capital of Bayelsa, around lunchtime, Eweke said.

“They threatened that if [he] tries to run, they would shoot at him,” he said.

Abiri’s whereabouts were not known on Sunday.

Peter Afunanya, DSS spokesman, told local media he did not have any information on the incident.

Austin Bodo, another witness, told Nigeria News Agency that the men who accosted Abiri were “carrying the type of guns used by DSS operatives”.

Sahara Reporters, a US-based independent news website that covers Nigerian affairs, quoted an unnamed witness as saying: “The men jumped out of the vehicles in a gestapo fashion while he [Abiri] was chatting with his friends and shouted at him that he was under arrest.

“While he was demanding to know his offence, he was forcefully pushed into a waiting vehicle at gunpoint.”

Abiri was previously held by the DSS for two years without trial, over alleged links to rebels in the Niger Delta in the country’s southeast. He was also accused of threatening oil companies.

He had no access to a lawyer or his family during this time, according to the Committee to Protect Journalists (CPJ). Abiri was freed in August last year following a campaign by rights organisations.

“We call on federal and state authorities in Nigeria to disclose where Abiri is being detained and the reasons for his arrest, and urge that they ensure that his rights are not violated yet again and that due process is respected.”

Amnesty International also expressed concern over the arrest “by armed men suspected to be DSS operatives”. It added in a Twitter post: “The humiliating manner of his arrest is unacceptable.”

Nigeria is ranked 119th out of 180 countries on Reporters Without Borders’ World Press Freedom Index.

The global press freedom group says journalists in Nigeria “are often threatened, subjected to physical violence, or denied access to information by government officials, police, and sometimes the public itself.”